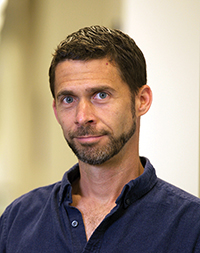 Justin Gardiner is an assistant professor at Auburn University and the nonfiction editor of the Southern Humanities Review. His writing has appeared in journals that include The Missouri Review, Blackbird, Quarterly West, and ZYZZYVA. He is the recipient of the Margery Davis Boyden Wilderness Writing Fellowship, as well as the Larry Levis Post-Graduate Award from the MFA Program for Writers at Warren Wilson College and is the author of Beneath the Shadow: Legacy and Longing in the Antarctic, published as part of the Crux Literary Nonfiction Series by the University of Georgia Press.

Out at sea, it’s bad luck to name a lifeboat, but in poetry—what great fortune to have this craft named and afloat in the world. In these pages, Justin Gardiner navigates rough waters, desolate wildernesses, and fires set before us by both fate and our own hearts. These poems seek to “illuminate only what is out of reach,” and this book makes those mysteries a little easier to hold in your hands. ~Matthew Olzmann

With an explorer’s precision, Justin Gardiner documents a “lifetime of leaving” in poems that move from remote canyons and ice caves to the terrifying wilds of the mind. What if our greatest journeys are “another way… of holding [our] real life at a distance”? How do we find our way home? A masterful reckoning with the past, the present, and the mysteries of familial and romantic love, Naming the Lifeboat is a tour de force. ~Chelsea Rathburn

Somewhere in their evolutionary windfall
these island roosters have lost
any intuitive sense for the dawn—
their all-hours shrill announces the one
clear tenet of their creed:
“It’s not about how many times
you’ve been wrong,
it’s about being right once.”

Along the hillside above town,
the clash-colored jeepneys are already
en route, and three boys—the small
and sturdy fenceposts of their lives—carry
machetes to the fields. Somewhere

we’ve each kept a thick
ledger of disappointments. Our defeats
ordered and logged, like the dates
stamped to the back of library books.
So forgive me, instead, for focusing
on these waves—how they
lap the shore without
consequence, how in a few hours
the sun will envelop us all
in the same unbending light.

Once, in the city, I rented a skyrise
apartment overlooking the expressway,
and would pass whole nights
gazing down at the urgency
of other people’s lives—
their lights and speed—but ambition

gets lost on an island like this—
a hundred miles from anything,
where the one-lane traffic slows
for the grain left to dry
in the sun of the roadway.

Success is so ordinary. The blur
of attainment—and then,
and then . . . . Better, I think, to fail
and keep trying. A life alone
but grateful—these roosters,
wrong again, with their foolish trumpeting.
Though if you hold the world at such
a distance, it is the emotions you lose
track of like the days. Take this one—

though just beginning, it’s as if
I can already see the fishermen
returning from the horizon with their
tangled nets. What little they’ve caught
will be hung out on clotheslines
to dry. Headless
and hollowed to the winds.

The village kids here in summer
are the essence of idle beauty—
racing worn-out tires uphill or strumming
the same few songs from a doorway
under cover of the afternoon rains.

And for the second straight day
the builders have fallen asleep
inside the narrow shade
of the half-finished home
overlooking the valley.

From this distance, America
is a joke at which we
would each laugh if not
for the heat. Only what they’re building
is a larger inn for when the road

is complete. Progress
riding in smugly on its dumb
white horse. I know
that I am no one to lecture
on need, that my being here

deserves its share of blame.
But I also know
that in a few hours the wind
will rush over these terraces,
finding the light inside leaves of green,

where a woman works alone,
preparing the harvest of this year’s seed.
Let them finish the road.
The soul cares nothing for that.
It grows in the dark mud,

it crests stubbornly
each spring—I never understood
what labor it was, what release—
pounding away at the husk,
winnowing the grain.

Twelve Stories Up on the Roof of a Bank

After the wine was almost gone
and the music blared on,
Sarah and Renee stepped, casually,
out of their clothes, white curves
of breasts above streetlights,
screaming down at traffic
as they danced out on the ledge
that would hold them because
it had held us all before.

And if that night was a canvas,
it would’ve been painted by the Old Masters,
who’d slip in a self-portrait away
from the centered scene,
over by the fire-escape, perhaps,
where you and I sipped the smooth dregs,
passing the bottle’s neck
between us in the dark.

What saved us was no one looked up.
And when I think back on some
of the stunts we pulled, nights we orchestrated—
rappelling off silos and climbing the steel
ladders of moving boxcars—I see us
crafting ourselves into the stories
we would tell afterwards.

The oak-lined blocks I drive home on—
day’s long glow shining in headlights,
beneath the ledge where we’d call down
from that twelve-story height. People don’t
look up; they look back. And if they’re lucky
whatever they once felt for people
will resemble holding a pitcher over the sink
and letting it fill slowly with water:
a heaviness that gets them through.

But I also wonder, in a way
I’m not quite proud of,
just what we were after on those rooftop nights—
a friendship we could hold onto,
or a past we would lose.

Not for Navigational Purposes

They say Einstein rejected some of his own theories
because they lacked beauty,
though that didn’t stop the punk clerk
down at the Stop-and-Go from tattooing
his own face to get back at his parents.
Less than ten percent of objects floating in space,
astronomers assure us, are doing anything useful.
A bit high by earthly standards, perhaps,
though our planet too maintains its delicate orbit:
our friend Jesse made 150 bucks for a gig
last night, then got a 145 dollar speeding ticket
on the way home. We are all just waiting
for summer, or waiting for summer to end.
Our debt to society is being paid off
through the consolidation of our student loans.
Many attractive women walk their dogs
in the park, though that isn’t enough
just yet, for me to own one myself—
all that care, and need, and co-habitation—
and nearby, someone slams his fist
down on a table: “How do you lose a man
without legs?” he demands,
and the question hangs there,
as I step into the blur of streetlights.
On the corner, another bum with a cardboard sign
proclaiming the end of our days.
How do you lose a man without legs?
How does a generation that is so
young, already carry itself like a flag of surrender?
Though tonight, the failure of our forefathers
is a thought that keeps me warm,
that disperses blame, as I stumble home—
just another lost son, just another
footnote to the apocalypse.