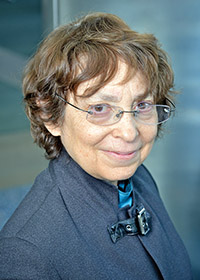 Robbi Nester is the author of three other books of poetry: a chapbook, Balance (White Violet, 2012), and two collections—A Likely Story (Moon Tide, 2014) and Other-Wise (Kelsay, 2017). She has also edited two anthologies: The Liberal Media Made Me Do It! (Nine Toes, 2014) and an Ekphrastic e-book, Over the Moon: Birds, Beasts, and Trees—celebrating the photography of Beth Moon, published as an issue of Poemeleon Poetry Journal.

Carefully crafted, beautifully written, these poems are a bridge indeed between this world and the one that shimmers just beyond us. In one poem, the narrator is a small child trying to capture the moon in her mirror; when that fails, she catches it in a net of words, and that is what Nester does throughout this book in poem after gorgeous heart-breaking poem. These are poems that “sing for the joy of being heard.” ~Barbara Crooker, author of Les Fauves and Barbara Crooker: Selected Poems

In Robbi Nester’s Narrow Bridge, we are urged to be more open and fearless— Consider how a mirror tipped toward the sky captures the moon, if fleetingly; how “The voice of the bird/ in the maple/ is bigger than his body.” There are still passageways we can widen, if only we allowed wonder to make a bridge between our sense of fixity, and that refuge and home we could make again in each other. ~Luisa A. Igloria, author of The Buddha Wonders if She is Having a Mid-Life Crisis and Ode to the Heart Smaller than a Pencil Eraser

If Beethoven were a whale, he would
groan a song as monumental as his bulk,
one the waves would write– always
in suspension. They would take an hour
to break along a shore so distant
none of us could fathom where it was.
Deaf, yet full of music, he would weave with song
the ice-blue play of sun on arctic water,
surge of rain on turquoise surf, conjuring
the other creatures of the ocean as he sang–
mantis shrimp constant as castanets,
booming grunts and groupers,
dolphins’ chatter in static bursts,
the electrical hum of moon jellies,
a thousand castoff planets
drawn through the ocean
like a comb through flowing hair,
while choruses of belugas, blue whales,
near-sighted narwhals would contribute
a plaintive descant line.
To start, he would have sung
the molten earth, hot and smoking,
the burning mountains shedding pools of tears
where this whale, the only living creature,
could circulate the globe, singing the world into being.

In the ocean’s wavering light,
seen from above, her body wears
a human form, and yet the mimicry
remains imperfect, her shape
resembling the swell and sudden
falling off of breakers in a storm,
striped teeth those of a parrot fish,
suitable for tearing flesh,
dorsal fin a frill between sharp
shoulder blades, wild octopus eyes.
All her life she sang ships straight
into the rocks, but could not help
pitying the sailors, far from home,
drawn by voices that promised
so much. A predator in love with her prey,
she envies their shapely calves,
longs to enfold them in her own
strong thighs, to scissor the waves
and step out on shore.
She’s only held their drowned
and swollen bodies.
Just once, she wants to touch
their living skin, to scrape the glittering
scales from her long arms, her hands.
She would give up anything,
her sweet voice, bright carpet of corals
and anemones, duets with whales
to be one of those alien others
striding the green world.

Call me optimistic. I keep my one eye
always open, and have since the beginning
of that egg, the world.
At first, there was only
a pearly sea covering everything.
Darkness and light laid together
under a tree and made the stars.
Up close, they were hot and angry,
sizzling in the sky’s skillet. Far away,
they were cold and silent.

In the daytime, I watch the clouds, my
kin, both solid and liquid, taking
shape outside the window.
Sometimes they are small and quiet.
Sometimes the wind whisks them
into a loud froth. They touch the earth
with their hungry mouths, devouring
houses and cars, cows browsing in the field.
Then the sun’s yolk covers everything,
warm and nourishing, and the day
begins again.