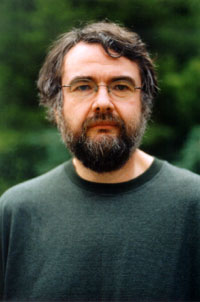 Not the former Mouseketeer with dubious singing aspirations, nor the St. Louis Cardinals’ pitching ace who, in 2001, posted a 22-8 record with a 3.16 ERA and finished third in the Cy Young Award voting, Matt Morris received a Master of Arts degree from the University of Southern Mississippi’s Center for Writers at Hattiesburg, where he married the mad daughter of an alcoholic wharfinger, despite the admonitions of friends, family, some weedy guy in a big flowered shirt he met at a party and other well-wishers, but this remains a private matter which he chooses not to discuss. Now divorced, he teaches in West Virginia, where he lives with his teenage son in the yellow house on the left after the third light. Usually a cream Camaro sits in the drive.

In these poems I hear Charles Bukowski, Adrian Louis and see Dagwood in a cheap Elvis suit leaning into a curve. These poems aren’t easy. They’re wired by a couple hundred horsepower and loud rock. They’re fast and hard. Watch out.

Matt Morris is just the kind of balls-to-the-wall, full-speed-ahead language junkie that I want, I need, I demand to show me around the amped out, anything goes world in which we do our best to live.

Nearing Narcoma is hell-bent breathless more damned enjambing fun than a merry-go-round of monks stoked on love & death juice–hyped up on “Shempish” TV rural real and surreal sexual exhaust and exhaustion so thick you could backfloat on it–more vatic than Elvis’s freezer full of Nutty Buddies Lorca’s Mickey Mouse or “Frank/fucking Sinatra, baby”–hawking even more points of view than the P.O. missing person’s corkboard Julio Cortazar or Medusa’s hairpiece–basking in the physically metaphysical–imagine Dickinson morphed into Bukowski–twig to his sestina and free–verse acrobatics –watch out for this all too real language poet who knows how to work the raw material of the archaic to the ultra–contemporary–beware the technically innovative and very readable Morris Orphic finagler of lost love–a story teller and fabulist who pins the tail of the plot on the particular whether his own the world’s or a swirling Dairy Queen of both–this is a poetry of bullets flying good humor double entendre uneasy moments sadness and unvarnished beauty–word artist Morris runs counter to our endearing cultural moment takes it all and gouges ala mode de Van Gogh with thick palpable strokes the relief map of his American canvas.

Dagwood dealing poker in Ed Feeley’s garage; an unshaded
bulb blares over his pin-cushion head. At the table,
simple men puffing black stogies, quaffing frothy mugs.
The one with red hair, buck teeth takes the pot with three aces,
a king, & a queen, all the same suit. A fearful voice.
—Here comes Blondie mad as a goose, Dagwood.

Dagwood at the office snoozing at his desk, an unsigned
contract floating to the floor, pretty as a dream.
His comic cellblock switches from lemon to plum to tangerine,
serving to foster an atmosphere of insecurity,
fitfully punctuated by the business end of the boot.
—Dagwood! You do-nothing dimwit! You’re fired! Get out!

Dagwood at Herb Woodley’s hiding from the wife.
Dagwood at the pool hall making a three bank shot.
Dagwood at the bowling alley knocking down all the pins.
Dagwood at the doorstep bickering with a salesman’s
onslaught of hard sell punches. Dagwood,
bruised & beaten, atwitter over his new gizmo.

Insomniac Dagwood with a fat sandwich of cold cuts.
Dagwood squawking in the tub when the ladies’ club
drops by. Dagwood dangling from the bathroom window,
drippy wet towel draped around his bottom,
red Z’s masking his face like a bland whodunit. Bells.
—Mr. Dithers wants you, Dagwood.

Dagwood whooshing out the door. Dagwood late for the bus.
Dagwood sporting the familiar bow tie & slouch hat.
Dagwood in polka-dot boxers, hiking his trousers,
pecking Blondie on the cheek, slurping down coffee
as he runs out, slamming pow! into the postman. Letters
flutter around them like fragments of Dagwood’s recycled pulp.

As if part of a shlocky
bar mitzvah shortly after I’d
turned thirteen, Mother told me
we had Jewish blood. I turned
to the ever suffering Jesus’s
likeness nailed to our foyer wall.
Hallelujah! I didn’t have to go
to Sunday school or so
I wished & blew
a month’s allowance
on a 14k Star
of David & strung it
on a short chain around
my short neck. No longer
donning the stripes of my being
another Waspy kid from
the West End, I possessed
ethnicity! Oh I didn’t
know the Torah & Talmud
from a tetrahedron, but
proselytizing Pentecostals left
me the hell alone, my shnozzle
buried in shmaltzy Yiddish
phrases as I shlepped along
the sprawling blight of blue
collar houses, frosted windows
filled with cheap flickering art-
ificial trees. When Grandma
arrived, fat arms swollen
with gifts, flushed joy
of the season rushed from her
cheeks the instant she glimpsed
my star pendant twinkling
in the flashing “Noel” strung
across the door. She called
it “jewry” & wondered aloud
if I’d outgrown my present, her
insinuation falling between
extortion & exorcism, but
no squelching pair of corduroys
insidiously hidden by fancy
foil wrapping could win me over
to that petty, three-headed
cloud-dwelling god I’d long ago
relegated to the realm
of science fiction. She feigned
surprise when I took my seat
at the dinner table & bowing her
head, pointedly asked
if I’d mind that she said grace.
You want to shmooze with your
imaginary friend, I began, her
anti-Semitic slips dangling
like tattered, yellowed lace
below the hem of her brown
polka dotted circus
tent of a dress, where suppressed
with sexuality under layers
upon layers of old ladies’
unmentionables lay
the saga of her mythopoetic
father, whose name no one
ever spoke, not even the one
he’d chosen to keep secret
that part he himself denied. Still
I knew how he’d died—parked
on the railroad tracks smooching
with his Jewish jezebel, too much
of a shnorrer to drive
to lover’s leap when the train
came out of nowhere, whistle
howling. Grandma
swore her father’s ghost appeared
confessing he was sorry for
all of it. For being
no good. For believing
everything was a lie. For being
a shlemiel, a shlimazl & a shmo.

Under the moon, a shoe box
of contraband tucked
under your arm, your echoed
steps crack spidery pavement,
ensnaring you in foggy flats
of a dour town propped
against a cheesy
mesh backdrop. A black
T-bird chirps around

the corner. You duck
into a pharmacy, flitting past
the aisle of rain
resistant, sun repellant, plastic
delphinium. The druggist,
high behind the counter,
winks & smiles. In his lithic, dilated
pupils, you see the nozzle

of the drive-by
shooter locked on you. Stalking
the racks of prophylactics, I
pounce, pinning you
to the dirty
linoleum, my beefy
bulk your only protection from the
.45 whizzing by. Your name—

doesn’t matter or
I’m sure I’d remember it, not
the post-impressionistic outline of the dead
druggist, the spotty
blood from a shot errant
as my desire. Unruffled, you
tell me to get off.
I already have, I mutter
sheepishly, hands jammed
deep in my pants’
pockets fumbling for
the compulsory cigarette

after. You gather
the contents of your box spilling
like a confession signed
with a red, wet capital “O” your
lips make abruptly over mine.
Another shot ricochets
off the register. Even though
I ought to hold you
for the cops, I let you go. Thanks
for everything, you coo in a
convincingly throaty way, but I
sense there’s something you won’t
say still lurking
out there in the big
whatever.