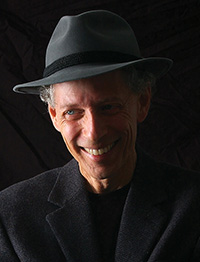 Steve Broidy is an emeritus professor of education at both Missouri State University and Wittenberg University. He is the author of the chapbook Earth Inside Them and Editor/contributor to From the Tower: Poetry in Honor of Conrad Balliet (both Main Street Rag Publishing), as well as the philosophical work A Case for Kindness: A New Look at the Teaching Ethic (Myers Education Press). With his wife Susan, a sculptor, he lives in rural Southwest Ohio.

In Necessary Deceptions, Stefan Broidy describes himself as “Elven….half enmeshed in, half removed/from life.” Indeed, he asks us to consider that “there is life beyond life,/comfort after grief.” And yet, tongue-in-cheek he also asks, “How many times can we be surprised/whenSpring pulls rabbits out of her sod-topped/hats?” First these poems charm, and then they enlighten with deft imagery, comforting insights, and stories akin to parable. ~Cathryn Essinger, author of My Dog Does Not Read Plato

Two thumbs up!!! With sensitivity and wisdom, originality and creativity, Steve Broidy, poet and educator, weaves a clever tapestry of timeless themes—innocence and experience, life and death, nature and the esoteric, family and friendship—in poems reflecting and awareness of literary greatness, becoming great themselves. With fresh vernacular, Broidy defamiliarizes and revitalizes reality, keenly perceived. Broidy’s poems will surprise and delight you, take you on a journey down bucolic roads, and beyond! ~Anna Cates, M.A., Ph.D., M.F.A.

An Academic Poet Plays the Game

for Michael, in memorium

Six-foot-five, like most of us
dragging a booze-pot up and down court,
he played his own game inside of ours.

Sweeping the long hair he always affected
away from his eyes, he would charge down court
mumbling his lines, plowing defenders
out of his way to the bucket as if
the pain inflicted, pain received was
always part of the play.

When he’d sink one, he’d crow, Am I Good!
I parsed it a question, but never said.
You son of a bitch, he would growl on defense;
I own your sorry ass; and his arms
would come down on hands and heads,
heedless of our hurts, and his.

Between games, we’d loaf, pretending we weren’t
stiff and drained. He’d rail at deans,
colleagues, kids; swear he was looking
for a new place to work.

I hate the writing, he told me once,
as we sat with beers after one week’s game.
I’ve slaved over one lousy poem all week; and
it may never get done. But you know (here he leaned
in close, eyes unfocused) I need all the hate
I can generate; all the pain I can give and
take. The secret to greatness is pain,
he said, and if life won’t provide it, you must
make it yourself. I’ll tell you this:

There never was a truly great poet
who was also a happy man.
That’s why I love this game.

He published one book before he died, and
it was well received. Too young
by far to be lost, wrote the critics; but all
should be glad he left us this.

We play the game still, though sorry he’s gone;
but, truth be told, we know the game
is safer, smoother now without him.
And that’s why we love the game.

We are the children of the paranoid.

Those who heard a predator
in the soughing of the breeze through grass
begot us–they who sensed that silent
watering holes were traps.

We are their heirs who can never relax;
who fear intruders in the coughing
of freezers late at night; and foes
at work when we slip on ice.

We are those who survived the ages
alive to what moves and what moves us.
Our children learn their rag dolls do watch them,
and things that are restless live under their beds.

We see omens in splatters of crow-drop on sidewalks,
plots in the movements of ships at sea;
no comfort but to spit three times,
say our prayers; close our doors.

We know the noose of events draws tighter,
scuttle to seek a shelter that’s real; and
fear that a patient God looks upon us,
filling the Void with a knowing smile.

On the Road Back

I hate the coming home:
I know, by mid-way, back will ache,
hip will throb; one leg
will go numb.
.
Five a.m. on a misted morning:
interstate empty as my thoughts,
as deeply rutted as my joints,
just past the mystic point where one

highway becomes another,
I came upon three does, heads down,
walking slowly across the lanes.
They seemed to me as if lost,

weary past measure. I guessed
in the time it would take to mark distance,
shift my foot, deflect my course,
that all would pass.

Two gained the median; but the last,
turning her graceful neck my way,
Stopped cold in the crumbling inside lane
as if some load, from long travail

without a rest, forbade
another step. When we met,
I took the blow, coasted on,
listening, waiting for pain;

fearing to look back: ashamed.
Somewhere down the road, I thought,
a place for repair would open soon.
I prayed it would not be far;

and felt again it must be true,
though common sense says no,
that the road is longer coming back
than when we first leave home.