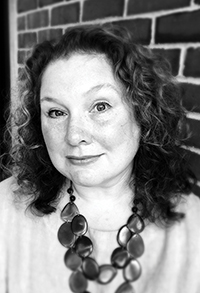 Carol Hobbs is a poet from Newfoundland, Canada. She lives, writes, and teaches high school English in Hudson, Massachusetts. Her work has appeared widely in journals and anthologies in Canada, the United States, and Ireland. Hobbs has read her work at many venues including CBC Radio, the Newton Free Library Poetry Series, the PoemWorks First Friday Series at the Newton YMCA, the Massachusetts Poetry Festival, and as part of a travelling cast of poets with the March Hare Poetry Festival in Newfoundland. This book in manuscript form was the winner of a New England PEN Discovery Prize.

Themes of memory and exile, of the drifts and shifts of time, are strikingly realized in New-found-land. Ferocity and beauty, the numinous and the visceral–Carol Hobbs’ poems capture the interpenetration of these, both in the beloved Newfoundland of her childhood and youth and in Massachusetts where she has spent most of her adult life. Hobbs has a distinctive lyrical voice; this book makes a significant contribution to the corpus of Newfoundland poetry. ~Mary Dalton

All children want the treasures blooming under rocks
and wedged like blades in the tree bark.
Their little red hoods weave through the canopy of leaves
like windblown poppies.
All children lie and lie and scream about wolves.
At the very instant grownups tire, turn away,
the sharp-toothed maw clamps down.

They tell us, Don’t play with matches,
and we strike the match,
become proverb, become smoke.

Imagine she says the girl I was,

thirteen, walking
the shortcut across her father’s pasture
before there were streetlights

and not even a sliver of moon.

There were worms and there were beetles

and the beetles clicked their shells.

I could have walked the safety of the road

but she didn’t.
Her every footstep is risk and transformation,
Cinderella in tiny glass shoes.

I sprinted the last distance blindly –

she wishes to be done,
on the other side of it, scaling the fence.
Surely there’s magic and redemption
and honey and apples and ever after –

slammed into the side of a sleeping horse.

Their collision thuds
like a wooden gate between us.

We daughters of hard working
mothers and fathers all took home
economics as if we hadn’t better
things to study at school. Cooking.
Potatoes, of all things, chopped and mashed
or halved and broiled in their skins,
potatoes with eyes
when we scrubbed and sliced and peeled,
in colanders, one for each sink.
Dirt ground into our fingers.

There was sewing too, for the daughters
of fishermen, and lumberjacks,
and rosy cheeked shop keepers,
and truck drivers, and itinerant evangelists,
and iron ore miners, and mothers at home.
Also quilt blocking, tatting, ironing, pins
in a smocked bodice, purple gingham, appliqué,
a crooked running stitch.

And cleaning, our hair hidden in kerchiefs,
rubber gloves, mops with bleach, silver polish,
as if we owned silver or would ever consider it.