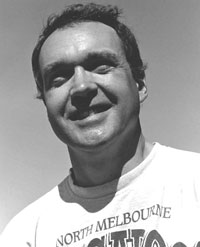 Dave Seter studied creative writing at Princeton University, where he earned his degree in civil engineering. His first poetry instructor told him to stop writing until he turned forty. Following that advice, the author took a job with the gas company in Jersey City, New Jersey. That was where he saw the underworld leak with flame, and where he discovered the only “boss” he could stand was Bruce Springsteen.

Born in Chicago, he has lived on both coasts, and currently resides in Sonoma County, California. He has been an affiliate artist at the Headlands Center for the Arts in Sausalito, California, and has served on the board of directors of the journal ZYZZYVA. His poetry reflects his interest in light and dark, work and play, and the captured image. This is his first published collection of poems.

With real language told from the seats of Fords and Chevys, Dave Seter brings us along for a literary ride. On the way, we’ll take a hard look at our streets, gutters, culture, and-thanks to the author’s considerable artistic skill-we’ll witness transformation as he manages to take “the desolation of dirty concrete, impregnate it with beauty.” His compassionate yet unflinching eye gives us a chance to look around, see what’s been built, what’s fallen, what happens when “the underworld leaks” and we get to inhale it, taste it. Every page of Night Duty is a shotglass full of working class poetics.

Night Duty is full of precise dissections of nights and days rendered with rhythm, punctuated by bolts, grit, rattling and, more often than not, humble questions left floating in the air. These poems are so deeply entrenched in the particulars of place that it’s fascinating how many of them work on negotiating levels of estrangement from the very peers, streets or landscapes that engage their narrator. Otherness is the catalyst. Dave Seter’s work will gift the reader with its unique sense of the extraordinary in the ordinary, with language carefully engineered to balance emotion with detachment, to balance veering away from the moment with staying on track to throw light on “the flint in us that endures.”

Just out of college I learned to work,
to turn textbook theory into practice.
Blueprint, spreadsheet, jackhammer,
the gas company taught me a thing or two.
New engineers joined the work crews
of unionized men who tore up the streets
listening for hissing gas. Equations
taught me how much force concrete could take,
but up close it’s dirty work, opening the street.
New Jersey’s covered ten inches deep
in Depression era concrete, tough
make-work stuff. My boss of the spreadsheet
never drove out to join us, never knew
how the work day happened, or started.
Every morning the crew assembled a cooler
full of bottled beer to haul rattling along
and drink when the job was done.
It’s no joke-experienced laborers really
use their beer guts-to balance the weight
of pavement breakers, forty pounds each
and bucking with compressed air. With each
clatter and kick of the jackhammer’s blade,
I realized why workmen curse. Civil works
are more than just blueprints-but also
wordless gestures-even uncivil words.

At the toll booth’s concrete bunker
I make my offering to leave this earth:
Bay silt on the Oakland side.

My sweet-smelling rental sedan idles,
its swiftness irrelevant, its pistons impatient.
Why are we stopped? Why?

The ramp to the TransAmerica skyline
is paved with Chevys, Fords, Subarus,
Mack and International trucks.

Why are we stopped? Why?
We drivers glare, forward, back;
squint, in search of blame.

Compact disc inside the dash,
a jazz singer calms me,
antidote to the growing tantrum

I flick the window switch
to smells of tar and hot rubber hose.
My elbow absorbs the door-sill’s burn.

Resigned people step out of cars,
contemplate a thousand lost collective hours
with the help of cell phones, cigarettes.

Then word spreads. Up ahead,
a bicyclist’s been shot dead.
The word disturbed is spread.

The radio says no walkway,
no bike lane across the bridge.
And the tunnels between cars are slight.

Word spreads that the man was shot
in flight from a crime, riding a getaway
bike with a shotgun strapped to the frame.

Suddenly our necks aren’t rubber
but veined with quartz;
we feel the blood pound.

Another Icarus has tried, succeeded
at leaving this earth, too poor for wings or a car.
We quiet and wait. Up ahead, cops retrieve
shell casings bright and spent like coins.

The frost line’s not descended yet
into Minnesota’s desolate plain
ponded with rice, planted in flax;
but the earth makes the plough stutter
over syllables of stubble. The season’s
last beets, purple with sugar,
shoulder to shoulder, tremble in bins
like unsaid words, loaded on haulers
whose diesel engines grunt
then settle back in silence.

Dusk falls; a time for going home.
I drive a rented sedan into town,
past an oversized northern pike
guarding Erskine proper, past the graveyard
tilled for morning. Tomorrow our dad completes
his journey; returns. Tonight his casket
is flanked by mums in urns. The wakeful gather
at the mortuary: aging farmers pass coffee cups
and kind words; the pastor interrupts
with a sermon, says we’re ants before God.

Some words are kept, some said,
some hauled across the Dakotas in sacks.
One door opens, another closes.
The mortician sneaks outside to smoke,
my dad’s spirit on his heels. He didn’t
particularly like mums or sermons,
but liked to share the silence of stars
with someone who would listen
nights when the light completely failed.