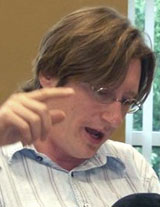 Since receiving his Ph.D. in English from the University of Nebraska-Lincoln, Todd Robinson has taught at Creighton University and in the Writer’s Workshop at the University of Nebraska-Omaha. His poems have appeared in Margie, The Southeast Review, The Potomac Review, Strange Machine, Natural Bridge, The Midwest Quarterly, and elsewhere. His articles and book reviews have appeared in M/C: A Journal of Media and Culture, The Lincoln Journal-Star, Dictionary of Literary Influences, and Prairie Schooner. He is a founding member of the Seven Doctors Project, served for a time on the board of the Backwaters Press, has judged several writing contests, and has presented his work in bars and classrooms, hospitals and restaurants, at dinner parties and art museums, parks and coffee shops, and at Ted Kooser’s farm.

These poems surprise with their leaps, whether by their language or their images, whether they dive in close to bring us hospital halls and waiting rooms, or take a long view to show “a crumbling city/ on the butt-end of summer.”

–Marjorie Saiser
author of Beside You at the Stoplight

Todd Robinson’s audacity and linguistic verve help distill our contemporary mania (“The drive, the drive/the western ache”). But that’s not all he can do. Sounding his barbaric yawp throughout the brilliant poems in Note at Heart Rock, Robinson manages to accomplish what hardly seems possible. He unites us. He allows us to believe in our uniqueness and our preservation. His ability to create an entire world with all this love in it is a genuine achievement.

–Steve Langan,
author of Meet Me at the Happy Bar

Robinson writes with equal measures of wit and profundity about every moment of a life, from the tender to the tormented. His subjects are nature, pop culture, big ideas, and the tattered heart. If philosophy had a fist, it would look like a poem by Todd Robinson.

–Brent Spencer,
author of Rattlesnake Daddy: A Son’s Search for His Father

Around thirty the boy left my memory.
I was in Balboa Park, among a hundred
black dresses. Gin rioted in my head
like a New Year’s reveler.
This very candelabra moment
of being atomized without
being isolate I knew like a mooncalf
philosopher crammed with human
feelings he mutes each morning
for the benefit of wisdom.
He thinks his way to the front
of the line. To him we seem to be
either the tiny plastic baby in a king
cake or a nineteenth century necklace,
its citrines yellow as the plastic
energy crystals that powered plastic
ships around our favorite board
game’s star map, the black facsimile
of space we opera’d, or minute
yellow dabs floating like the stars
I saw when I raged at her the night
our marriage very briefly died.
These moments will never return.
You are grown. For a while I danced
with a smiling stranger, worrying
about my breath. Then the ball
dropped, which despite all these
years is not very celebratory at all.

The drive, the drive.
The western ache.

The taillights’ watery fire.
The roadkill. The insult.

The forest feeding,
our life gone out of sight.

cardinals and doves
everywhere. We stilled,

witnessed the cluster
and squawk, the strange

purposes of animals.
In Colorado, on the mesa,

to help thin that herd.
A note at heart rock.

My nails are ragged. Oh, James, by the way,
did you like my new doggerel? It’s a replica
of one you wrote in some book or other.
I wish I had a footlong carrot right now.
Do you like marijuana, I mean not just at night,
but any time? There are people like that, you know.
They’re like people who like mimosas, drink them
any time of the day. Wastrels, that’s what my father
calls them. Me, I’m addicted to addiction.
I like ping pong and ice cream, bruises,
the smell of simmering soup, the crunch
of potato chips. I like Manhattans and
bowling, too. What I hate most is being the last
one to speak under any context.

Do I sound like a neurotic? Are we still dying?
I once made a pass at a cheerleader,
did I ever tell you that? She said you can’t kiss
worth shit, and that’s not going to change.
Sounds kind of silly now when I tell you,
but she was a clown. Do you know that I have never
believed in God. It sounds so big and dumb, so vague
up there in the indifferent sky, not all-knowing. They
should have called him something like “Pudwhacker.”
But I guess that’s religion. What is it they always say?
You getting nervous yet, hon? I am. When I was seven
I sat on the edge of her bed and let my cousin
touch me all over. I love to remember it,

but I still can’t think of her in a healthy way.
I’m silly, it’d be a waste to let it ruin our relationship.
Who do you think is more fixated on this memory,
me or her? It’d be okay with me if it were just her.
Darling, can we start soon? I really hate to say it
but I need it in the worst way.