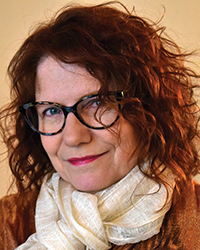 DJ Gaskin grew up in California, where family camping vacations in Yosemite nurtured her love of the natural world. Her poetry has appeared in CALYX, Comstock Review, Gargoyle, Iodine Poetry Journal, among others. She has also conducted expressive poetry workshops in addiction recovery programs and other settings. DJ is also an artist, working in mixed-media and bookmaking. Having escaped the Washington DC area seeking calmer grounds, DJ Gaskin now lives in a small town in Western North Carolina with three wise cats.

“My Father Comes to me in Wrens,” D J Gaskin writes. These rich poems explore the region between waking and dream, between life and death, and especially between human and bird, in poems that are as intense as they are well-wrought. The voices of creatures are “calling their stories,” creatures who also know “what needs to remain unspoken.” Gaskin’s book confronts some raw truths with a feast of language. I’d get a copy, if I were you. –Fleda Brown

In her poetry, D. J. Gaskin cups the world in wise, tender hands. Delicate and muscular at once, her language delineates our human longings and failures, placing us as both alike and different from the birds, trees, and animals she so tenderly observes. Full of yearning and hard-won insights, these poems are musical lessons in how to live. — Rose Solari, author of The Last Girl (poems) and A Secret Woman (novel)

DJ Gaskin sets up this collection with closing lines in the first poem, “Crow Speaks,” “…pondering what/ she should speak next, /finding what should be left/ unspoken.” Gaskin invites the reader to experience the natural world in a surreal, almost mythical context with rich imagery, while exploring the visceral reality of human nature. Her language is fluid and evocative. A wonderfully woven collection of poetry. —Jonathan K. Rice

When she could speak, you would hear
about days that don’t involve doors,
ceilings, or selflessness, only
treasures from skies and roads
that open at first caw, narrow only
at dusk’s gathering.

She would talk of how the days fly with her,
and then: how once she lingered late,
past afternoon’s settling
into the earth, braving
the black horizon
that turns her sapphire
in the succumbing to twilight.

She would recount how the man
in the moon gave her voice,
for that one long night, in return
for three bones from the cliff,
how she pondered the gift
and how to let loose all the letters
that lingered in her mind
since near creation of time.

She would tell you of her first word,
the meaningless mood of it,
and the others that followed
like a speaking of tongues,
of destinations mislaid;
and then, pondering what
she should speak next,
finding what should be left
unspoken.

The flash would blind us if we looked,
she said, so we could not watch thunderstorms
at night. We were not allowed outside at night unless
there was a full or nearly full moon to guide our way
away from ghosts. My mother would not read at night
for fear of misinterpreting meanings that rose up
from between the lines in such wee hours
when the spirits came out to dance
and confuse the air.

My mother would not sweep at night. She believed
the stirring of bristles and unsettling of dust
would tickle the dead awake. She would never cry
at night. Crying at night, in the dark, alone
or not, is much too dangerous, calling you
to succumb to the empty darkness so you could
never stop the tears. Night does that, she believed.
And this we chose not to test.

My mother would never wear red at night, nor
could we. She was convinced this color
of anger would insult those you encountered
in your dreams. My mother would never cook
eggs at night. She claimed the chickens would know
and become fearful of not producing enough
for more than breakfast and then give fewer
eggs from the uneasiness.

My mother would never sing
at night. She believed even a lullaby would leave
you restless and unable to sleep. We could not
sing even to ourselves, and she could hear
behind doors. There are no doors
now, no mother now, no one to stop us
from singing to our children.

I’m going down to the water, don’t follow me,
I whisper, readying to meet silence there.
Leave me to dream at the dear dark sea.

The water sings in languages of peace,
liquor of nature repairing despair.
I’m going down to the water, don’t follow me.

The loud wall of the water cradles my screams,
cold racing waves to quench my fever.
Leave me to walk into the dark sea.

The water can still me, make me believe,
lift me on clouddrifts and spare me some tears.
I’m going down to the water, don’t follow me.

There can be nothing but beach glass to intervene,
not even promises to confiscate nightmares.
Leave me to my endless sleep at the sea.

True, nothing is clear and nothing is clean,
but grant me my own wordless anchors.
I’m going down to the water, don’t follow me.
Leave me to dream at the dear dark sea.