Of Squid and Other Humans 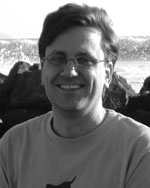 Greg Larson is an attorney at Gray Plant Mooty in Minneapolis, Minnesota, specializing in the law of nonprofit organizations and health law. Formerly he was an editor at Milkweed Editions, and has also worked as a teacher, a bookseller, and a freelance writer. His work has appeared in The Comstock Review, Controlled Burn, Defined Providence, Flyway, and The MacGuffin. He lives in the Twin Cities with his wife and daughter.

Greg Larson delivers everything there is to love about poetry: he captures the mundane elements of our lives-a bone, a lake, a photograph, an old dog-and refashions them as magical. The experience of reading these poems is exactly that which is described in “The Giant Squid in Repose,” where a photograph depicts a man lying down next to a giant squid: “I wonder / if he noticed his lungs expand and contract, / his chest rise and fall, each time lifting, / by a few millimeters, a column / cored out of the star-barnacled universe / shaped like him and fastened to him / as surely as his skin, / and as infinitely heavy, as infinitely strange.” These beautiful poems, again and again, make those invisible columns of our experience accessible to us, and you will no doubt be thankful for carrying their mysterious, strange weight.

July my mother gave me what she feared
was human bone; she pulled it from ribs
of sand in shallows near the lakeshore, turned
it in her hands, runnels of sunlight

slipping down her wrists, a slick black joint
unjoined from a column of others
that once bowed flesh into an animal shape,
four-legged or two. She must have been curious-

its pocked heft, its curves and hollows
enough to make her remember the summer
they dragged the lake for John, the deep
print the aluminum spine of his boat

pressed on the sky, the lonely wash and roll
of the unrecovered. I drowned
the thing for two months in lake water sealed
in a clear plastic container labeled potato salad.

My mother wanted me to take it home,
ask my doctor friend to identify it. Nights, by the light
of the open refrigerator, I guessed
beaver, deer, poor unlucky dog,

while it menaced, Pleistocene, from the windowsill.
Two months I delayed while my daughter assembled
in the dark beneath a soft bell of skin pulled
along the same mathematical curve

as a snail shell, as the Milky Way, the spiral
of plastids and the slow spun undersea
where squid bury centuries
without light or sound. So much unnamed:

the same voice that tells the whitetail to lower
its belly into the water and fall apart
invites my daughter to surface, whole and bleating,
into this thicket of blood and bone.

The Giant Squid in Repose

If I were a sea monster, I think I would tire
of holding up a miles-tall column of water
sculpted to my shoulders
like some aquatic Atlas,
each tentacle, every sucker,
just another point of pressure
supporting not merely ocean,
but its passengers-sperm whales, supertankers,
thunderheads bearing down
with wire brushes of slanted rain.
The pounds per square inch
would hammer the blood flat.
So I understand the weariness of the giant
squid’s posture in this photograph:
the squid is spread full length
on a pier, a wet dress,
its alien eyes gogged from either side
of its head like the two wheels
of a push-reel mower. Hauled
into the wispy lightness of this overworld,
its gray slopes of flesh look incapable
of lifting a teacup. A bearded gentleman
in a fishing hat lies next to the squid.
Why? What does his supine self
have to do with Exhibit A?
Ah! He is in the photo for comparison.
Witness Exhibit B’s harpoon grin.
See him extend arms over head,
fingers outstretched, to declare I am
almost as tall as this dead squid. When he posed,
looked up at the camera, I wonder
if he noticed his lungs expand and contract,
his chest rise and fall, each time lifting,
by a few millimeters, a column
cored out of the star-barnacled universe
shaped like him and fastened to him
as surely as his skin,
and as infinitely heavy, as infinitely strange.

When my sister shot her dog
I pretended not to be shocked.

She lives on a farm, she’s supposed
to divide blood from flesh, seed

from chaff. She’s supposed to judge.
But Jesus, she shot Max.

Max, who was longsuffering
incarnate, Christly, blind from lye.

so you’d love him a little:
How he clamped onto a smaller dog

and tore out its throat, hair and gore
clotted on the gravel drive.

Confused or murderous, does it matter?
There is Isabel to think of,

tiny Isabel who is friend to goose,
friend to dog, likely to reach

into the maw of his blindness.
I am sure my sister wept

as she sighted Max in.
Still it stops my breath

that such a dog can go unforgiven,
or that forgiveness

can be aimed like a gun. Maybe
I need hardening,

in the cartilage of his ear,
stood it there like a middle finger

or a stone at the mouth of a tomb
to keep love in, death out.