On the Saturday After The Rapture

Selected for publication after finishing as a finalist in the 2006 MSR Chapbook Contest. 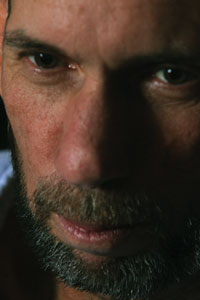 Jesse Millner is an English Instructor at Florida Gulf Coast University. His poetry and nonfiction have appeared widely in literary magazines such as Willow Springs, Gulf Stream, and Third Coast. He is a past recipient of an AWP Intro Award for Poetry and his first chapbook, The Drowned Boys, was published by March Street Press in January of 2005. Jesse lives in Estero, Florida with his wife, Lyn, and dog, Sam

All-Stars of the Bible

My head still buzzes with old sermons
the preacher delivered about the Bible All-Stars:
Noah collecting the animals
in twos, David kicking Goliath’s ass,
the Savior upsetting the temple tables.
But the real hall of fame moment
came when the big guy rose from the dead, fleeing
the dark cave for Paradise. The whole time
our pastor spoke, I thought about girls in my seventh grade class
and the after-school parties where I inhaled
the fragrance of their hair-sprayed heads
during the first slow dance; and I realized

then, religion is the gasp after the quickening, the heavy
breathing in earthly closets, the way the moon glows
on rare California ice, the way cactus blooms at night,
the way the mountains tear black swaths of meaning
from lower elevations, constellations swirling
and dying as stars become dippers and bears,
the way the Eucalyptus green the leaves of morning,
my mother holding my navy father’s infrequent letters,
childhood opening

to a thousand doors,
one of them my Sunday school class at the First Baptist Church in La Mesa
where Mrs. Thomas, large in her cotton dress, asked
me week after week if I’d accepted Jesus as my personal savior;
and when I’d answer “no,” she kept me after class,
depriving me of those blessed minutes before church began
when we’d run around in the playground
out back where the teeter-totter heaved
small bodies into space,
and the cries of children drowned out the fear of hell.
I listened to my fat jailer in the way I often listened to rain in those days,
as if I were in another room, away from the water,
her words disappearing like mist.

She’d march me back into church
where I’d sit next to my mother
in the suffocating dullness of the preacher’s
words interspersed with dutiful hymns
until finally we reached the climax
when all the saved brothers and sisters marched
up to the mourners bench,
their mouths stretched to orgasm
as I listened to the boredom whirring in my head,
and unlike Blake’s terrible angels,
the notes sang neither Hell or Paradise;
I heard the nothingness
of an empty room filled with believers
singing “Oh lamb of God, I call.”

After services, Mrs. Thomas lingered
at the door to give me one last look that said: Without Jesus, you’re lost.
Learn to love God.

I loved the Beach Boys and the Beatles, but most of all Lesley Gore
whom I often conjured naked and singing in my bedroom
during California nights when I left my body
as I kissed her generous lips and touched
her breasts which grew larger in imagination,
a great gift back then, that journey away
from the Baptists and pinto bean dinners,
away from the absence of my father
who was cruising the Med,
away from sermons about the hellfire.

These days I miss the hymn-singing, the way the moon
waned over the Laguna mountains, the way I found
moments of peace beneath the wind flung Eucalyptus
on wild mornings I flew to school down Lemon Avenue,
anticipating girls and the way the morning sun
glazed the high windows of the classroom
as though God had become light
and all of us were temporarily haloed
in a kind of celestial brightness that
had I not known better
I might have mistaken for love.

The sun drifts below Mt. Helix,
twilights our beige duplex in La Mesa
where my mother drinks the only beer
I will ever see her drink.
She’s missing my father who’s sailing
toward the edges of the world
this October when the Santa Ana winds
heat the canyons. Mom’s thirsty,
trying to connect with dad,
but halfway through she pours the yeasty brew
into the kitchen sink, throws back her black
hair, which is beautiful, and hangs in thick
bangs down her acne-scarred forehead.
She holds this fragile world
of absence together:
the everyday swirl of school,
dinners of cornbread and pinto beans.
On Saturdays we go to Coronado,
and I collect sand dollars to pay
the light bill, groceries, rent,
and the huge debt we owe Jesus Christ,
our Lord and Savior who redeemed us
to this brittle life of the poor.

On Sunday nights my mother scrubs
my elbows and neck raw
in preparation for Monday.
My skin, like my clothes, will be worn, but clean.
Past a park where the eucalyptus trees are green
with the heavy light of morning,
I will march like a Christian soldier,
the small change of broken
shells rattling in my pocket.

On the Saturday after the Rapture

Tonight my mother will watch the latest hurricane
news and tell my father that surely these are
the “End Times” and the sight of bedraggled
brothers and sisters swimming down streets in New Orleans
or Gulfport or some other god-forsaken-place
where the storm has landed, will further confirm
Revelation, and she’ll fall asleep dreaming
of Apocalypse. The moon was red the other night

and I imagined horses swimming its pockmarked surface
as I walked the dog down our quiet, South Florida street
and felt the first cool breeze of September rush
through the black olive trees to greet me.
The dog and I don’t want the world to end.
We’d prefer not to be burned alive in a nuclear holocaust
or drowned in the storm surge from a tropical cyclone;
in fact, the both of us would prefer to live forever,
and every night after our walks, for eternity, we’d like to head home
for his dog biscuit and my ice cream, respectively,
though it’s true he does like ice cream and I like his Newman’s
peanut butter treats, the crunchy almost sweetness
of the little heart-shaped delights.

I don’t eat his treats often, but I’d like
to dream his running dreams, the ones
that follow our walks when he collapses
on the rug, and then his snout
quivers and his body quickens, legs swimming,
tail whacking the living room floor.

of strange moons where horses swim
in lunar light and angels whine
after them, wishing god had given
them legs instead of wings
and moons to wander instead of dead constellations.

But those are imagination horses
and the grim angels are real,
their fingers dripping with New Testament blood,
their glowing skulls radiant
like the grinning dead,
the ones god will plow the fields of earth with
on the Saturday after the Rapture.

On the Saturday after the Rapture,
the dog and I would prefer to watch cartoons
instead of being thrown into a lake of fire.
The dog and I would like to eat peanut butter
right out of the jar and watch Bugs Bunny
instead of being tortured forever by Satan,
that grimmest of all angels, the fallen one,
the serpent, the tempter, the all-time worst bad guy
whom the Baptist preachers condemned in showers
of spit, as they thundered about the spitted skewers
that awaited every graceless sinner.

Grace is the horse that runs beneath the moon
on a blue-tinted field outside Lexington, Kentucky
where I lived once in those lonely days before
I met my dog. But I still loved horses,
which the Lakota Sioux called “big dogs”
because they had no name for the escaped
Spanish ponies, the ones that fled Cortez
and Coronado in those long ago days
when the Conquistadors brought Jesus
and salvation on the tip of a bloody sword.

So many died for our God.
No one has died for Dog.
No one has died from preaching horses
running across a red moon, harbinger
of fall when hurricane season will finally end
and those of us still alive will sleep
with our canines on Florida nights
when we forget the stars above us are long dead,
when we forget the story of our own mortality,
that secret which leaks out with every breath,
as we dream hopefully of whole herds of horses
running across fields of full moons, their hooves
kicking up luna dust, the whole universe
awakened by such thunder that
even those angels are afraid.