Five primary characters of Opening Arteries undergo varying blood ruptures. Adele Brower works as a marketing agent in Albuquerque, N.M. and lives with her fiancé, Reed Stegner. With his tapestries, his motorcycle, and his indifference to capitalism, Reed finds peace. When Adele suffers a head injury, however, Reed must hearken to social and financial rules he’d earlier smirked.

Across the country in Washington, D.C. is Jennie Lamont, Adele’s sister, who writes short stories about nurturing children when she is not actually nurturing her own children. She’s married to Jay, a corporate lawyer, who dwells on syndication, fly fishing, and himself, not necessarily in that order. In addition to Adele’s trauma, they face the fury of marital discord when Helen Henderson enters the scene. As her relationship with Jay develops, Helen has trouble figuring if a wedding ring is worth the weight of kids that comes with it.

Nietzsche wrote that “one must have chaos in one’s soul to give birth to a dancing star.” Opening Arteries attempts to mollify the chaos of these characters, to be a star that dances for the reader. 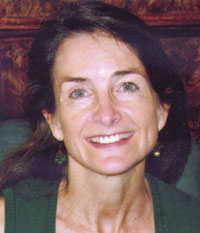 Elizabeth McColl is a graduate of the University of Virginia, Duke Law School, and UNCC. She is currently an instructor at Central Piedmont Community College and at King’s College in Charlotte, North Carolina; enjoys reading, biking, and mothering three children. Her novel draws from experience: suffering a head injury and surviving with grit.

What if your life were altered irrevocably in a single moment? When Adele, a corporate marketing whiz who’s succeeded at every challenge ever handed her, suffers a brain injury in a biking accident, every aspect of her life must be rewoven. Her fiancé, Reed, a fiber artist, and her sister, Jennie, who is struggling with internal and external traumas of her own, are deeply affected as well. In Opening Arteries, Elizabeth McColl has created a rich, complex tapestry of interwoven characters and events and a study in the frailty – and the strength – of the human spirit and of the bonds between us.

The monitor in the second floor operating room of Albuquerque Medical Center was marking the space between heartbeats. Listening to every pulse, neurosurgeon Lawrence Tice leaned over the thirty-four year old woman. Her shaved head nestled into a padded horseshoe headrest, and an internal jugular catheter ran from her neck to a hanging blood bag. From the crow’s eye, she looked comfortable. She seemed asleep, lying still under starched cotton sheets. Even though her eyes were open, they didn’t move. They didn’t blink. They didn’t follow light. Her pupils were fixed.

But Adele was not motionless. Or content. She was rioting. Her brain was in anarchy. Inside her skull, the blood vessels pounded, buffeting against bone rhythmically. To answer the expanding brain’s knock, the neurosurgeon turned a flap in the fascia of her bald scalp with a knife. He secured the flap with Children’s clips, exposing skull-a skull that clamored to be opened. Tice’s forearm muscled the small-bit drill into the bone four times, two at the top of her head and two more along its left side. Bone dust scattered. After irrigating the dust away from her forehead, the top of her head, and the headrest, Tice opened her skull with an electric saw, carving two lines, one that made a straight part-for any hair, if it had been there-and the other that chipped a capital “C” around her left ear. The saw’s teeth razored the bone, slicing it at mega-pixel speed. When electrocautery removed the bluish tissue and muscle surrounding her brain, subdural blood squirted out a happy red.

Her brain relaxed. Air pressure in the operating room relaxed, too. The doctor began to reconnect the craniotome with suture. “Need three more units of plasma,” he intoned to his assistant, who nodded and turned to retrieve the blood bags. Tice’s speech moved with a regular beat, as steady as the patient’s beeping heart monitor, but without lilt. Finishing up with the same steadiness with which he had started surgery, Dr. Tice pulled off his cap, mask, and gloves at the sink. He washed his hands for a full minute. To a nearby nurse he directed an iambic pentameter line, “I need the boyfriend in my office now.”