Out of Order / Howard Faerstein

The Advance Sale Discount price expired February 1. For those who prefer to not buy online, the check price is now $17/book (which includes shipping) and should be sent to: Main Street Rag, PO BOX 690100, Charlotte, NC 28227-7001. 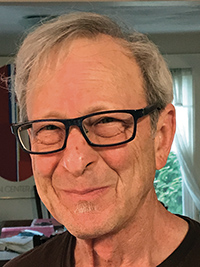 Howard Faerstein, former NYC-OTB bookie, former itinerant adjunct professor of American Literature, is the author of two full-length collections: Dreaming of the Rain in Brooklyn and Googootz and Other Poems, both published by Press 53. His poetry and reviews can be found in Great River Review, CutThroat, Off the Coast, Rattle, upstreet, Mudfish and on-line in Verse Daily, About Place, Nixes Mate, On the Seawall, and Connotation. He is co-poetry editor of CutThroat, A Journal of the Arts, and lives in Florence, Massachusetts with Mischief the cat.

From glaciers and Cossacks to present day “falsifiers” and New York jazz clubs, Howard Faerstein’s curious mind and associations will leave you breathless. With a naturalist’s eye and a musician’s ear, Faerstein crafts language that is crisp and fresh: “the downbeat of rain,” “the succor of stubble corn.” Echoing both Whitman and Ginsburg, Faerstein’s poems hold the wonder and sorrow of personal and collective history, yet always embrace the earth, our beating hearts. ~Gail Thomas, author of Odd Mercy and Waving Back

The matter in Howard Faerstein’s Out of Order ranges from enormities: “even as cardboard coffins are left in the streets of Guayaquil” to intimacies: “His room slightly bigger than a casket.” Faerstein’s is a poetry that deftly and gently realizes the remarkable that inheres in the ordinary: “radishes can grow anywhere” or “has always been / wood enough / expect there always / will be.” Out of Order is life railed against, accepted, sometimes celebrated. ~Allen Brafman

Like a geologist, Howie Faerstein drills deep: past the moment, past memory, past the past itself. It’s as though he has coined his own language, one that tells us who we were, who we are, who we will be if only we open ourselves to the world as he does. His lines are like jazz riffs, saying things that we haven’t heard before, that can’t be said any other way. ~David Kirby

Let every one answer! let those who sleep be waked! let none evade! ~Walt Whitman, “Respondez! Respondez!”

you anticipate this season never ending
just as you expected the same
before ice cleaved to rock face
prior to ice cleaving from rock face.

Moths will not gather in daylight
nor butterflies color our nights.
Those are a robot’s future calamities.
I’ll settle for the couch not speaking

of what it knows:
that Rimbaud’s Drunken Boat is anchored
along the wall of Rue Férou; that the language
of beavers can be fathomed only underwater.

Imagine patience on a sandbar,
an invisibility of egrets, the succor
of stubble corn, gray moths swarming
through an English walnut grove.

And recall Sainte-Chapelle, former Palace of Kings,
used as a granary by the Revolutionists,
the Passion of Christ and Crown of Thorns
melted down by the mob.

that muffled roar is the sound
of a hurricane losing intensity
after landfall.
And after that, in this particular
moment of light, silence, then
the downbeat of rain.

WHEN I RECALL DAYS

When I recall days built of adamantine rock & then
those made of talc, hours hiking cactus-lined paths
or riding a subway to midtown—if I trace all the streets
I’ve Iived on, people across the hall, neighbors down
the block, perhaps ridiculous, perhaps a fright, houses
topped by widow’s walks & all the animals under a late
moonrise, prowling bears pawing the too soon blueberry
patch, great horned owls hooting & scorning & rabbits
running to the bloodied stone wall—when I gaze upon
this assemblage, these Indonesian scorpions, pheasant
feathers, Apache Tears, oil-stained invitations to the
backbiters’ ball, if I try to find meaning when I think of all
the squares of pavement, seeds I’ve sown in the dark,
the soil itself, how it’s best to plant when crumbly, flowers
that bloomed a week or less, those lilies-of-the-valley
vanishing in three days time, & the cucumber & snap
beans eaten & shared—unspeakable prickly beauty,
intractable struggle, the idea that experience never leaves
the body, that it glows in diminished light, the storms brewing,
those that passed, tree pollen puddling in a helix of orange,
& all the starts & stops, friends I have, those I’ve lost, what
I thought of others & what others thought of me—when I try
to remember, when I awake again & again, & suddenly see
my reflection, a boy walking by a store window, a grotesque
staring back, a kid playing skeeball with walnuts in a cutout
shoebox & the oblivious ones, the ignominious ones, the very
breath—even when I’m dreaming, even then, there are
the children, lovers, flesh & bone

The Ministers of Propaganda sow their deception.¬
When repeated enough

a quake sets off a tsunami—
blood libel and Jews assassinated in their synagogue;

an affront to whiteness
and Blacks slaughtered in their church.

My father, an unprincipled man, far ahead
of his time, advised me to always say
I have more than I have.

If it happened he rose from the dead
I’d tell him I pawned his black-market watch
but kept his aluminum ladder.

Some believe the children
slaughtered in their classrooms
were phantoms, never existed.

as if our sun orbits a fixed Earth,
as if sixteen died, not three thousand.

Tell us where the sea ice has gone.
Tell us the coral reef isn’t dying.