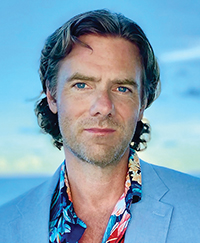 Kurt Cole Eidsvig has won awards from the Warhol Foundation / Creative Capital, the University of Montana, and the Massachusetts Cultural Council. A featured columnist and regular contributor for Big Red & Shiny, Examiner.com, Poets Reading the News, and ArtsAmerica, his writing has also been included in numerous journals and anthologies. Media outlets like The Boston Globe, The Improper Bostonian, and Boston Neighborhood Network have featured Kurt and his work as an artist, writer, and poet. Gallery exhibitions in Boston, Sydney, and Los Angeles have featured his visual artwork. He maintains a website at EidsvigArt.com.

Kurt Eidsvig notices everything. With immensely beautiful, searching lines, with wit but not a trace of cynicism, these poems give back to us a humanity we are losing every day. ~Joanna Klink, Author of The Nightfields

From conversational narrative to nonlinear association, from syntactic extension to clipped repetition, Eidsvig invites us to listen and travel with him. It’s a journey you’ll want to take slowly, and then to take again. ~Martha Collins

These fresh and honest poems—about doubt, disconnection, love, emptiness, place, and addiction, among their many themes—seem particularly germane to our moment. Arising from deeply felt personal experiences and keen observations about art and the visual world, they also express universal hopes and revelations that make the multiple meanings of human existence all the more profound. ~Paul Hayes Tucker, Art Historian & Author

Kurt Eidsvig’s OxyContin for Breakfast demonstrates once again that he is a master of writing’s most challenging format: poetry. ~Richard Walter, author of Essentials of Screenwriting

1.
The Ice Cream Shoppe on West Broadway
in South Boston was the first to ban customers
from their restrooms. They served these big-ass
sundaes with long-handled spoons and we would
dig and swipe for the last dregs of gooey hot fudge,
of whipped cream and nuts, of syrupy-sloppy
marshmallow and caramel. We’d delay gratification,
balancing bright red cherries we’d saved
for the end of spoons.

2.
My beautiful grandmother, who died at one hundred
and three, kept more than a century of memories
jammed inside of bins and cans and drawers up
on Telegraph Hill. She held coins and kerchiefs, pans
and buttons too; needles, thimbles, quilt squares.
She held my hand, and beneath her skin she collected
big blue veins, swollen fat like fishing worms, and twisting,
tightening, shaking, dancing toward the floor. She trembled.

3.
Grandma had guitars, harmonicas and phone books.
She had music boxes and ironing boards and towel racks.
She had stuffed birds from Acapulco, an assortment
of holiday wreaths, 4 Volkswagens in the garage and 190
pie plates. She had boxes of prescription painkillers that shook
like new maracas when I played music in her bedroom, her bathroom—
in her nursing home closet too—in the months and years she lived
and died there in gasping prayers. I shook and shielded and snuck.
I scrounged and prayed on hands and knees myself. I hummed
and sang and slowed to nodding. All of these melodies I composed
for The OxyContin Lullabies.

4.
When Billy “Noodles” Campbell OD’d in the Ice Cream Shoppe,
me and Johnny held a lighter beneath his foot until it burned,
like we were cooking up a batch of Noodles for supper.
The Ice Cream Shoppe had stopped serving sundaes
by then because we just kept stealing spoons. We seared
his flesh until it turned black, back before they invented
Narcan. Noodles sat up and gasped, remembered he wasn’t
dead. He was alive.

6.
We were at a keg party at the park.
Someone said, Give your hands, here.
Like this would be the spot,
here, where Mary and me
were getting married, not
just sharing a pair of gloves,
or the same foggy breath
exhales, or love. In the distance
an old Paul’s Boutique CD
was skipping from cowbells
and laughter; this jumping
up and down with whispers
and heartbeats collapsing too.
They said, “Come on, put these
in your mouths and chew.”
One for me, and one for you.

“When Purdue Pharma introduced OxyContin in 1996,
it was aggressively marketed and highly promoted. Sales
grew from $48 million in 1996 to almost $1.1 billion
in 2000. The high availability of OxyContin correlated
with increased abuse, diversion, and addiction, and by 2004
OxyContin had become a leading drug of abuse
in the United States.”

9.
Every zombie and vampire movie got more serious,
or was reinvented, after South Boston discovered opioids,
then heroin.

Whitey Bulger ran away, and we leftovers staggered
and moaned for Andrew Square and Methadone
Mile for doses. It’s alive. It’s over. It’s overdoses.

Outside my front door on D Street, two blocks
from the projects, people stapled warnings
on telephone poles about OxyContin, about Fentanyl,
about missing cats.

We found the needles. We found the veins.
We found out way too late the differences between
suicide and homicide.

We found discarded destroyed remains
of spoons on the ground everywhere we looked.
I said to Johnny Blockbuster, “Company’s on its way.”

10.
My grandmother used to say, “Go back in that bathroom
and wash your hands before I put you over my knee
and hit you with a wooden spoon.”

In one little box alone, she had a sterling silver
collection of over 28 different spoons.

11.
Back then, they warned us all about spoons in jail.
Forget the knives and forks; they’re flimsy. Those big
long-handled spoons are what you need to watch for.
Break ‘em off, sharpen ‘em up, and make a point.
Go ahead and slide one down your pant leg.

12.
When Mary came out to visit me, she had track marks
on the backs of hands and bus maps in her pockets.
She hadn’t heard of eyelids yet. She’d chewed, then
smoked, then shot,

then quit. She’d found Jesus, then meetings, then collapsed
her veins. Then Mary prayed and found the backs of hands.
When I think of track marks I think of compact discs,
selecting tracks from one to twenty-eight. They told us they’d
never scratch or skip. They told us things were indestructible,
dependable and true. They spoon-fed us promises
about songs that wouldn’t end. My grandmother’s records, too.
I came-to one day in 1996, in 2018, and had a broken heart.

13.
Grandma had playing cards and wine glasses.
She had flowerpots and clothespins. She had
cherry jars and bourbon. She had photographs
of advertisements she swore could look like me.

♫ Love is like a faucet / It turns off and on ♬♪

A. Notorious mob boss and serial killer
Whitey Bulger has fled town.
B. Boston, Massachusetts has the highest density
of doctors per capita
of any place in the United States;
in the universe, the multiverse, this galaxy.
C. Some part of me will always be standing
outside Boston Medical Center
in April of ‘96 smoking my last cigarette
as the sun comes up.
D. The doctor says, “You fucking addicts.
You spend your life
getting high and then think you know
more than doctors do.”
E. I hear my head say “Run.”
F. The most important moment in my life
was when I realized there was nowhere
left to go.

15.
In Southie they called them OC’s. Some places
call them blues.

“Purdue learned from focus groups with physicians
in 1995 that they were worried about the abuse potential
of OxyContin. The company then gave false information
to its sales representatives that the drug had less potential
for addiction and abuse than other painkillers.”

Billie Holiday sings the blues:
♬♪Love will make you drink and gamble /
make you stay out all night long♬♪

You can make their veins invisible, they say;
Erase their map marks home, they say;
You can misplace and mistrace their blood, they say;
We got so many blues they’ll lose their way.
When a vampire looks in a mirror they only see
the blue light of tomorrow. Everything else is gone.

18.
My grandmother was superstitious. Every
time someone dropped a knife she said,
“Say a prayer right now or you’ll get sick.”
When she dropped a spoon she said,
“Company’s coming. Set an extra plate.”

19.
My grandmother said it was my job
if the house ever caught on fire
to grab the box of silver she’d hidden
beneath her bed and start to run.

The dented brass of pawned trumpets
and clink of collectible coins; the bent
spoons we presented as presents. I ran.
At night the CVS autodialer calls
to remind me of my prescriptions.
They send a congrats card about
my Nicorette in 2014. It says, “Never
stop quitting.”

20.
In 2018, gallery owner Fernando Luis Alvarez
was charged with a criminal misdemeanor
and a felony for placing a 10-foot-long 800-pound
spoon sculpture outside Purdue Pharmaceutical’s
headquarters in Stamford, Connecticut.

The sculpture, made by Boston-based artist
Domenic Esposito, was left in the driveway.
The police said the gift made it too hard
for company executives to enter and exit
their offices. It had to be removed.
The sculpture lives on today
in the Stamford impound lot. It’s alive.

21.
In 2011 after a nationwide manhunt
Whitey Bulger was arrested and charged
with 19 counts of murder.

23.
When we walked back to her apartment
Mary reached up and placed her needles
high above the kitchen cabinets. A subway
map lay crumpled on the floor. The lighter
burns beneath her feet had scabbed to twin
limps by then. One for you and one for me.

I said. “You left.”
There were tracks and scratch
marks on the floor, the places
I had been.

My grandmother always told me
God answers all our prayers. Sometimes
he just says no.

25.
Grandma had this tacky novelty spoon collection
in her china cabinet to commemorate places
she’d never been. Alberta, Canada had a maple leaf;
Our Nation’s Capital with George Washington’s profile
on the stem. Back then I hoped and prayed

that George’s wooden teeth were made of silver
or bronze, or anything of value
for the pawn shop down near Chinatown.

♬♪ Love will make you
do things/
that you know is wrong ♬♪

26.
In 2018 Mary Elizabeth Lynch died
of a blood infection from hypodermic needles
that had migrated into her coronary artery.
She didn’t die from overdose. Mary died
from a broken heart.
In 2018 I came-to. I flipped the spoon over
and looked there, upside down.

♬♪ If you’re in China, I’ll go to China /
I’ll never never let you free
Both day and night and night and day /
You’re gonna see a lot of me ♬♪

27.
In 2018 we drove down past West Broadway.
“Isn’t that the spot where the Ice Cream Shoppe
used to be?” I said. The place had gone full fusion:

“I thought that said Needles, not Noodles for a second”
I said, “R.I.P. to Billy Campbell.” Another noodle in the soup.
Johnny Blockbuster said, “I’m pretty sure nobody’s
trying to cook up dope with a pair of stolen chopsticks.”

My grandmother looked down next to her bedside
and saw me crawling on my hands and knees. A bunch
of spoons I stole kept spilling from my pockets, pouring
on the ground. They played a melody she knew by heart;
The OxyContin Lullabies.

My grandmother on her deathbed looked up and spoke
directly then to God. I heard her from the floor
and she almost sang “You better set another place up there.
We’re going to have more company.”