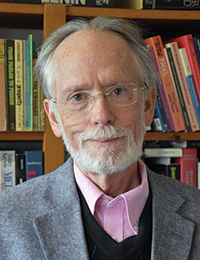 Jamie Sullivan did his graduate work at Creighton University and St. Louis University. He has taught writing and literature at Mount Marty College and the Federal Prison Camp in Yankton, South Dakota for many years. His poetry has appeared most recently in The Lake, Flyway, The Naugatuck River Review, and The Briar Cliff Review. Pack of Lies is his first full-length collection.

In Jamie Sullivan’s debut the wild “step like women from robes onto the edges of highway” and get “Madonna’s face tattooed just below a navel”. Queens, knaves, freaks and maybe an ace or two celebrate abandonment, heartache and life lost in cornfields, trailer parks, bottom-less bars and black coffee nights. These inimitable poems are gritty and gracious, intimate and loud. A Pack of Lies, like most love, rings so true. ~Jim Reese, author of Bone Chalk

In Pack of Lies, Jamie Sullivan offers poems that range from recollections of a man struck by lightning: “And Henry said it was the / strangest thing, a thud, like an unsnapping / and his eyes filled with a hum / and a singing went through / his right shoulder and / out his fingers / as if he had stretched / beyond the reach of his skin,” to the stark scene of a suicide: “Donovan jumped in January / at Riverside Park five miles / below the dam where / the churned water never freezes, leaving / a red cell phone like a rejected organ / on the snowy banks of the Missouri.” These powerful poems reflect on the endless mysteries that life continues to pose for us all. ~Neil Harrison

In Love on Foot

The fallen cottonwood limbs were
so white and Jasmine in red stockings
the air sweet in the willows.
The darkness, the darkness and Ganzi the cat
soft across the stones
snake in her mouth.

We shared a peach sitting on her bed
one day in Tekamah and a hot day in August felt
the peach-colored sunset and Julia’s hair and her breath in mine
cicadas landing on the window screen
and a luna moth come to earth
gentle as an eyelid closing.

She was Eastman, she was Snow, she was Watkins
and in Omaha we walked through sculpted mounds
berms and swales of a coalescing interstate
to eat sugar donuts and smoke Old Golds and talk
and talk and love sometimes in the ice of winter and black coffee nights.

And we walked and walked among earthmovers
where Cass St. and California St. and Webster
and Burt were disappearing, white wooden porches
and limestone steps and trellises laced with clematis
lifted away and orange day lilies where Lucy had waited
while lacewings orbited the streetlights.

At dawn exit ramps and entrance ramps emerged
sleek concrete curves looping and splaying away and
away in serpentine tangles to Utah and Maine and the Carolinas
and in her Chevy she tears the wrapper
from a Milky Way letting it snap out the window
and she sees hot blue sky open and open over and over.

We’ve told all our lies.
We know them, name them, mark them
queen, knave, joker, false ace
and move them on the table between us.

A new lie has a sharp heat
the blue seed on a welder’s torch.
The other lies re-assemble about it
curling forward and becoming truth.

Then we re-shuffle, poker faces adjusting.

The phone queeps in the dark
to tell me it’s dying.
The way back to sleep is a swim
into a sinkhole of blackness
where a switchboard operator
wants passwords usernames PINs.

She asks if I was ever born.
Then I’m getting emails and texts
from my dead brother Terry
saying he is great, down to
two joints a day and a few beers.
He’s finally pulling it together,

wants to tell me the whole story. Again.
I think of the suicide attempt
so confused we could pretend it was nothing.
Three missing days of whiskey and valium
and he walked out of the ER with a conman’s
smirk and a belly full of charcoal.

Like the time he was 15,
woke on the driveway
and came to the back door naked
with a brick in his hand.
No one said a thing. Sleepwalking we thought.
Then one Sunday night as he stared

into an old Star Trek episode waiting to be
streamed up, to come apart atom by atom
in a haze of glitter and be remade,
his blood stretched, his heart stopped.
His cat came through an open window
and dropped a dead junco at his feet.

The emails grow too faint to read,
electrons spinning into new orbits.
I hit the send button
having typed nothing,
and hit it again and again.
No brick falls, no door opens.

Pitts had a stringer of daughters
Brooklyn, Cheyanne, Solstice, and Babs.
(also two sons named Cody by different women).
Babs was the one you noticed.

By the age of five she was a free form
fit with enough snarl for three kids.
At fifteen she had the Madonna’s face
tattooed just below her navel
and could blow a smoke ring and spit through it.

In meeting Babs you learn she
has to have a finger on every button
a tongue in every socket
and before you sit and settle
a fork up your ass.

Then she had Britnee who later
pen-palled Charlie Manson and had
babies of her own as easy
as sliding peach halves out of a can.

Babs and Britnee spit and slapped
like a badger and skunk caught in the same trap.
They gouged and grappled while we watched
as if some cruel new law was being laid down.

They could write a fat book on Babs’ snakeball
of personality disorders
with flowcharts and mazes.
Babs’s been ready for reality TV a long time.
It ain’t her fault they ain’t found her.