This collection was published in conjunction with the 2003 MSR Chapbook Contest. 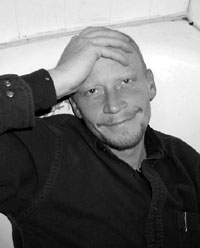 Martin Vest lives in Pocatello, ID with his wife Anne in a second-story apartment that was once a dance hall. He works in a thrift store where he recently demoted himself from assistant manager to simple clerk. He can play most of Beethoven’s 9th symphony on a Hohner blues harp, and is known around his hometown as (among other things) “that one guy who always wears the hat.” He is the author of two previous chapbooks: Dark Night of the Sybil (Acid Press, 1998) and Swimming the Eclipse (Kitty Litter Press, 2002). His poems have appeared in journals such as The New York Quarterly, TrafficEast, Disquieting Muses, and The Red Moon Anthology.

The Safe Invisibility of Saints

It’s hard to say now
when I turned and took this road;
a wild of cigarette-thickets in my lungs,
holding my breath
against the spark of whiskey
that will one day catch them fire.
Or when I first wore the feet
of Ichabod Crane
into the headless dark of a tavern
with the punched blood of my nose
three fingers of tin
hardening into silverware
at the back of my throat
for a breakfast of failing liver:

The lean white worms
of my face’s nerves twitch
in the wreckage beneath their scars—
the nerves of my mind,
squealing untied balloons
half-pinched, releasing their little wind
into a whirligig
of prescription slips and dander.

Every day she walks by my window
on her way home from high school—
A girl much too young
to see that I am not so old.
But even if I had her
what would I do?
What she calls promiscuity
I call foreplay—
acts she hasn’t yet imagined
I have long worn out
on a handful of common-law wives.
I wish I could go back
to the days when sex
was just sex.
Or she could come forward
ten years
through the tangled slop
of twisted men
she has yet to encounter—
through cigarettes and foreign beds,
a curtain of stretch-marks—
abandoned slang
and circular fashion . . .
It doesn’t take so long, really.
She’s already on her way
though she doesn’t know it.
A mere decade.

When we meet,
how much younger I will seem.

There Is Something About a Man

There is something about a man
reading a burning newspaper
at a dinner table.
He must be blind or else
how could he go on reading?
He must have a family, this man,
or else who will tell him goodnight?
How will he know when it’s time
to put out the paper
and go to bed?
And what of the candle
that started it all—
the homemade centerpiece
of rain-scented wax—
a downpour blazing at the end of a wick?
How long must a wife practice
to balance a cloud on the tip of her finger?
How quiet must she be, how steady?
There is something about a man,
with his legs crossed,
a black sock scrunched down
around the top of his polished shoe,
the face of his watch
casually reflecting the flame:
It will take more than bulletins on fire
to distract him from the news.