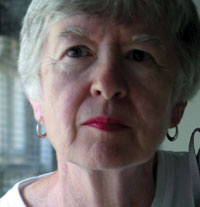 Ann Curran is a poet, writer, journalist, editor, photographer, cook, Ornish vegetarian, singer, tennis player, weight lifter, Catholic, wife and mother. She lives in Chatham Village on Mount Washington in Pittsburgh with her husband, Ed Wintermantel. Some of these poems grew out of courses taken at Carnegie Mellon University, where she was editor of Carnegie Mellon Magazine for 23 years. She worked previously for The Pittsburgh Catholic and Pittsburgh Post-Gazette. Always a freelance writer, she interviewed poets visiting the International Poetry Forum for The Pittsburgh Press, writing feature stories and reviews of readings. Poets she has interviewed include Maxine Kumin, Seamus Heaney, Czeslow Milosz, Ruth Stone and Allen Ginsberg.

She has visited Ireland every couple of years since 1968 and, because she believes that it is possible—and even beneficial—to love more than one person at a time as well as more than one place at a time, she holds both U.S. and Irish citizenship.

She wanted to be a stop sign
at three. Halloween, she became
a nighttime sky, quarter moon
atop her head, shooting stars,
Saturn splashed across her navy
night. Once she painted, pasted,
magic-markered wings too large
for a seven-year-old and told
the neighbors it was hard
to be a butterfly lifting
wings over curbs.

Now I deliver her, at thirteen,
to a high school placement test.
Knots of girls measure her—
summer blonde hair to argyle socks—
alarming in a red ski jacket.
She ignores St. Margaret’s Mustangs,
jockey-silks drawn together like bits
of metal round a charged pole.
She joins the herd with two
#2 pencils, brown-bag lunch,
skin-deep courage.

In the rain, I watch her down
the glass-walled corridor.
A quick, embarrassed smile
to a mother, whose eyes warm
in the cool, morning air.
At the desk, she removes
the red jacket with a flutter.
I lose her in the pastel clutter
of people getting pigeonholed.

chanting unknown words to a God
hidden behind incense and male
voices. But I breathed in beauty

in the rise of song, the fall of
petals, the Roman arches strong
as the promise of forever.

I believed in beauty first.
God was easy after that.

Many ascetic monks of the early Irish church, recognizing that their love for Ireland was so close to physical love, felt a penitential need to exile themselves from their lovely island.

—Brian de Breffney in The Land of Ireland

We dream in calendars.
I buy Ireland. Each week
I turn the page to see
where I would rather be.

A purple day in Galway.
Connemara calling
me to its rugged wastes,
its accidental lakes.

where a ring of ancient
stones stands undisturbed
by farmers hedging bets
against the older gods.

I’m even suckered by
a thatched-roof cottage
dug into a soft hillside
in Donegal, the top

The Atlantic bends trees
into a black blur.
The sea smacks Dun Laoghaire
with white anger. The taste

of salt rides every breeze.
In this white-washed world,
green beneath shattered churches,
wet beyond belief

I do not see small lives,
small places, grey towns,
grey faces. I see
where I began.