THIS IS A LIMITED EDITION TITLE. Only 250 SIGNED & NUMBERED copies have been printed. 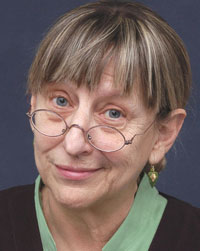 Phebe Davidson is the author of several published collections of poems, most recently The Surface of Things (David Robert Books, 2009) and Seven Mile (Main Street Rag Publishing Co., 2009). She is a contributing editor at Tar River Poetry and a staff writer for The Asheville Poetry Review as well as the founding editor of Palanquin Press. Her book reviews and poems appear regularly in a variety of print and electronic venues. Self-described as a recovering academic, she is a Distinguished Professor Emerita of the University of South Carolina Aiken and still up to her neck in poems. She lives in Westminster, SC with her husband Steve and their cat Fripp.

Phebe Davidson’s new collection puts the remote in your hand, pushes you back in an easy chair, and slips you a bowl of popcorn. What’s on? Mostly cop shows. What better so late at night? And who better to hang out with than your favorite detectives? Keep moving through the channels. You’re bound to find a hero to guide you through the slippery moral landscape. Plasma Justice works first as an enthusiastic homage to good bad TV, then again as a noirish empathetic walk into hard times and the choices that go with them. “Where / are the cops when you / need them? Where / are the men who fight fires / when the walls / get too hot to touch?”

Plasma Justice homes in on my late-night guilty pleasures: reading poetry and watching reruns of Law and Order. Davidson captures the shows–the quirkiness of Goren and Munch, the delight of coptalk over a bar, the batshit creepiness of an SVU “Perp.” But more than that, she finds the poetic justice in our love of these series–our deep desire for order and closure no matter the cost, and the messy human stories and vulnerabilities that make Jack McCoy’s deal on the table seem the only choice. Now, if they could only figure out how to get that “don don” sound every time I turn a page. . . .

A Note to Readers:

What comes on at three a.m.? Series that have been around. People watch. They drink. They doze. Their attention’s not overly focused, but they love these shows-cop shows where criminals actually get caught, courtroom dramas where the prosecutors understand how complicated good and evil are. Even the worst perp is someone’s father or mother or daughter or son, someone’s sister or brother, husband or wife. All of them-cops and lawyers, crooks too-have something to say about something: a lament for the chain of evidence, a snide remark about shoes, a sentimental accolade for a victim turned predator, a sardonic critique of marriage or style or the system of jurisprudence. John Munch, inexplicably, is everywhere. So am I, remote in hand, happy for the ride.

That’s the point. They’re invisible.
Just like the Nielson families.

He’s got it right.
There’s Lewis, Crosetti,
even John Munch,
who never, ever shuts up.

They take the calls and roll.
They walk the scenes.
They bitch about the ME
assigned to the case, the mood

of the wits, the pointless
rain that started falling
after they left the squad room,
that is intensifying even

as they turn up their collars
and that any second will be
running down the backs
of their necks. They’re those guys,

canvassing neighborhoods,
throwing their weight around
whenever they can. Leaning
on suspects, O.K. with survivors.

Sorry for your loss.
Falsone amazes himself.
He doesn’t think about this stuff:
Meldrick snapping his brim,

smiling at uniforms soaked
to the skin. Something
strange and wolfish in his grin.
Another stranger’s blood

washing into a storm drain.
The way the city cleans itself up.
They’re those guys.
He shrugs. Those guys

An Irishman, His Drink

The Irish make their own room.

Finnegan only worked one case,
already cold when he came on board.
His choice is Jameson’s–grain to glass–
more now than before he quit.

Not much point in worrying.
Hell, his wife’s been dead for years.
The city of Baltimore’s gone her way,
handbasket, crinolines, cheap cologne.

He eyes the bar stock lined on its shelf,
takes note of the glass at its back.
His own mug stares out every day
when he shaves at the bathroom sink.

If he isn’t careful, his features will blur.
He’ll remember the wife he hated so long,
poor Johnny shut up in a satin-lined box,
young Connor laid under the sod.

His family’s cluttered with firemen, cops.
He wants a drink & he wants it now–
Jameson’s, Bushmill’s, Tulley Dew–
On the next shelf a bottle of Haig & Haig–

The bar is crowded. He shoulders his way
inch by dogged inch–
He plants his foot on the polished rail.
He’ll drink anything in a pinch.

Sometimes you just get lucky.

Who doesn’t love the old guys?
Joe Fontana with his silver hair.
John Munch these last few years,
punctuation marks around his mouth.

They got no wind left. No legs.
But you been in this city twenty–
maybe twenty-five–years.
You see the way they barrel-ass

down a crappy street, praying for
a blind alley to slow the sonofabitch down
but running all the same. They never quit.
And it’s been a long week.

You’re watching TV. You’re almost
falling asleep when you look out your window
and damned if it isn’t Lennie Briscoe.
He’s solid as a rock, his feet planted wide

on the sidewalk. He’s got a good two-
handed grip on his gun, and he’s looking dead-on
at some guy holding a bag of stolen grapefruits.
You’re straining and straining to hear.

What you want is a Briscoe wisecrack
to carry you through the night, but he’s three
stories down, & you miss it. Jesus!

Christ on a crutch! He was here.

Be the first to review “Plasma Justice” Click here to cancel reply.