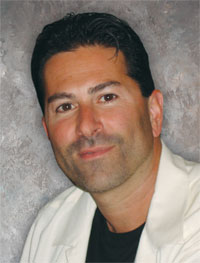 Neil Carpathios attended the University of Iowa Writers’ Workshop, and has since lived and worked in Ohio. He has taught creative writing and literature at various universities and currently is a professor at Walsh University in Canton. He also teaches English at Jackson High School in Massillon. His previous collections are: I The Father (Millenium Press), The Weight Of The Heart (Blue Light Press), God’s Experiment (winner of The Ledge competition), Greatest Hits (Pudding House), and In The Womb Of Kisses (Spare Change Press). He has been awarded numerous prizes for his work, most recently a second Individual Artist Fellowship from the Ohio Arts Council and a nomination for a Pushcart Prize.

God thinks of all the men and women
He’s created since Eden. He wonders
what went wrong.

It’s about time Sharon Olds met her match. In Playground of Flesh, Neil Carpathios plunges into our primal preoccupations with death and desire with the shocking exuberance of Olds, and his own dark and delicious language. In his compelling visitations to the foul rag and bone shop he’s like the praying mantis who knows the female will eat him, but is “too mad with desire / to stop, even headless.” I can think of few poets who could serve as more reliable guides to the confusing and beautiful terrain of the heart.

These are stunning poems. At once philosophical and plainspoken, they walk the line between pain and bliss with unsettling ease. Sometimes humorous, often sexy, they describe the landscape of desire, of what it means to live, and live fully, in the body.
There is a kind of tragic sensibility here, a willingness to see the human vessel as both a cadaver beneath a doctor’s knife and a lover’s paradise. Neil Carpathios finely articulates that which is most sacred, and yet most human. He is nothing short of a master of his craft.

The Smell Of Death

Being a surgeon’s son has perks.
You get familiar with the smell of death
when he walks in after work
scrubbed clean after dicing bodies,
sewing skin. You play detective,
see if you can find the slightest
clue: blood under the nails,
a stain on the sleeve.
You hang on every word
in case he lets slip some scrap,
like “cadaver” or “EKG gone flat.”
When he greets your mother
you watch his hands cup her chin
and guide her face to his to kiss,
same hands you know earlier
sifted someone’s soul like sand
through his fingers in a gaping hole
inside a chest. He hugs you close,
you breathe his daily smell.
You feel his body, your body
pressed, you wonder what swirls
inside like vapor in a jar,
and when he looks at you,
you search the eyes for what
they’ve seen, convinced the smell
of death is Old Spice and sweat.

Summers home from college I worked
where corpses were kept on steel cots
in crinkly plastic bags. I baby-sat bodies,
assigned each a name and number
for medical students who came in spattered coats
in clots of three around each slab,
unzipped their bag and said hello.
They’d read the tag tied with string to a toe
the name I’d given as carefully as any parent
names a child: Orpheus-80, Galatia-67, Demeter-22 —
names a corpse deserved, I thought,

then with scissors they’d snip skin above the breast
hanging over the corpse’s arm
revealing meat, a neat hole cut for the nipple
which sat
like a cherry on a sundae.

They’d saw ribs the way you would
a log, taking turns, arms tiring,
then pried open the chest
with vice-like screws. Mist shot out —
the corpse’s soul,
or body’s belch of air and heat —
as from an uncorked bottle
of champagne.

Up to their elbows in muck,
like children slopping in mud,
they’d dig out organs, dump in a metal tub.
They’d catalogue each part we pass through
this life with, all of it
sloshing inside our clothes.

I’d imagine spirits of cadavers hovering
near the ceiling, looking down, amused at us
in our playground of flesh. I’d sit in the corner
pretending to read but pictured my head attached
to the bodies, my eyes closed, faking my death
just to have someone’s hands cup my heart
like a prize tomato.

In the lab I remember the baby in the jar
crammed like sausage,
in formaldehyde preserved,
legs and arms twisted, jammed,
hands balled in tiny fists,
feet curled.
Dad got me the job
which sounded better than saying
McDonald’s or cutting lawns
to girls in tight jeans at Joe’s pool hall.
I’d brag, sound matter of fact,
watch their amazement, disgust,
but always respect. I’d tell them
other jars held other things:
a liver, lungs, pancreas, heart.
On shelves lined-up like books,
strange souvenirs the doctors kept,
maybe to remind them their jobs
involved parts of themselves.
I’d say I pour blood into tubes,
cork them with rubber stops,
stick labels with patients’ names.
I’d describe the antiseptic smell,
squeak of shoes on floors scrubbed clean,
doctors inviting me to lunch.
I’d buy the girls beers and call it
a strange museum, which they thought
poetic. Later, making out
behind the hall in my car or pressed up
against bricks, they never knew I sometimes
still saw the little face squinched to the glass
as if trying to see out a window.