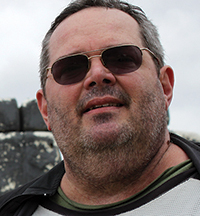 Bill Glose is a combat veteran and former paratrooper. Now a civilian, he seeks out literary grist through intriguing pursuits, such as walking across Virginia and participating in a world-record-setting skinny dip. The author of four previous poetry collections, most recently Child of the Movies (Finishing Line Press, 2019), Glose was named the Daily Press Poet Laureate in 2011 and featured by NPR on The Writer’s Almanac in 2017. His poems have appeared in numerous journals, including The Missouri Review, Rattle, Poet Lore, Narrative Magazine, and The Sun. His website (www.BillGlose.com) includes a page of helpful information for writers.

Winning a war is glory; fighting the war is gory. Bill lived it and survived to write about it in his powerful style. When he unloads wartime experiences in well-crafted narratives it brings tears of recall to his eyes – and to his audiences’. In an area that is home to many fine poets, Bill Glose has emerged to be among the best. When you read this, I’m certain you will agree.  ~Ed Lull, former submarine officer in the US Navy, former President of the Poetry Society of Virginia, and author of Where Giants Walked, Creating Form Poetry: A Poet’s Handbook, and The Sailors: Birth of a Navy

Postscript to War updates and adds to the genre of war literature, as storytelling and as a lyrical account of being a paratrooper in The Gulf War. Through often startling and powerful imagery, Glose evokes a surprising range of emotional tone. In spite of grim honesty, these poems do not acquiesce to gratuitous blood and guts. His language is informed, concise and sensitive, yet his concerns are humanity’s concerns— everything we demand of superlative poetry.  ~Frederick Wilbur, author of As Pus Floats the Splinter Out

During a time when many have compared the global struggle to defeat COVID-19 to a war, Bill Glose’s book is especially relevant. His “postscript” focuses on what came after his service in the first Iraq War—the painful memories of violence and loss as well as the happy memories of camaraderie among soldiers. His poems also recall the innocence and idealism that precedes war. These gritty, passionate, well-crafted recollections of war are destined to endure.  ~Henry W. Hart, Poet Laureate of Virginia, Hickman Professor of Humanities at the College of William and Mary, author Familiar Ghosts, Background Radiation, The Life of Robert Frost: A Critical Biography, and James Dickey: The World as a Lie

Where they came from, no one knew,
these segmented, scabrous creatures
shaken from our boots.
So foreign-seeming to us foreigners,
who thought we were anything but.

Who was first to snap them up in Tupperware?
I can’t recall. Only how each backed away
with pincers raised, tail curled
into a venom-spiked question mark.

What we did was place two in circles
inscribed by ammo crates and watch them fight.

Which would live and which would die?
We bet on them instead of ourselves,
letters written “just in case”
burning like coals in our pockets.

When orders sent us scuttling into Iraq,
we set them free and oiled our weapons,
each man swimming in an ocean of questions.
Leaders pointed to destinations on maps
inscribed with grease-marker circles.
Only answer we would ever get.

Outside our tents,
wind-whipped brown
lances every sliver
of exposed skin.

like the moaning of a bassoon.
Truth is like the scouring grit
of wind, precious lies stripped away
to leave one naked

as a newborn calf. Sand inside
our goggles, our gloves, our underwear,
the interior mechanisms of our guns,
bolts cracked open to reveal

powder as fine as regolith
scooped from the moon, a surface
without atmosphere, without sound.
Every granule loves to tell the story

of how it once belonged to a mountain,
before the pulverizing sledge of time,
before the yowl of wind eroded
every falsehood to which it clung.

What the Bomb Wants

The bomb never dreams of Maui vacations,
of climbing ancient volcanoes to peer
into pools of lava. Why beauty exists
in one eruption and not another
could exasperate the bomb but doesn’t.
It is busy counting seconds
until its annunciation
upon an unsuspecting crowd.

Spend time in the company of bombs
and you start to think like one yourself.
Bag and tag ears and toes,
amorphous chunks and splintered bones.
Guess which tab fits which slot.

Shoving shocked and curious onlookers
back from the perimeter, your mind
ticks toward detonation,
taking in the robes, the hands,
the dark-eyed faces, wondering
which is thankful for your presence,
which wants you dead.

Not all bombs have wires and batteries,
triggers connected to cell phone ringers.
Some attach to all you swallow
and hope to forget, biding time
until their sudden explosion.

Reason is secondary to a bomb. Resting
on a fulcrum, it waits for gravity to shift,
for the scale to totter and drop its weight,
for the chance to do the only thing it knows.

As a soldier, I was always certain of my verbs,
their crisp edges of black and white.
Kill. Capture. Destroy.

Then I entered homes we destroyed,
confetti of photo albums strewn
through wreckage,

wreathed in scents of those we’d killed,
their blackened bodies frozen
in pleading postures.

And all those conscripts we captured
then herded into concertina corrals,
skeletal husks

of teachers, tradesmen, shopkeepers,
all guarded by corn-fed boys
losing their faith.

A civilian now, I kick back in a leather
Barcalounger to watch the news,
the same mistakes

resurrected day after day. Generals and politicians
pry open the locked chambers
of my heart,

soothing salve of soundbites promising
that all our past mistakes had
been successes,

video from reconnaissance drones, they trot out
new-and-improved strategies to conquer
shifting targets.

If this were a real conversation, I would share
those tiny wisdoms gleaned from
all my verbs,

past, present, and future. For I can tell,
from their unflinching glint in blue eyes,
they believe it possible

to decipher the language of fate,
the conditional nature of every word
it speaks.