Prayer Book for the Midwestern Agnostic 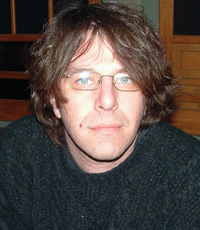 Roy Seeger moved to Aiken, SC in 2008 where he is an Instructor of English at the University of South Carolina Aiken. His poetry collection The Boy Whose Hands Were Birds was the winner of the 2008 Main Street Rag Poetry Book Contest. His poems have appeared in Greensboro Review, storySouth, The Laurel Review, Hunger Mountain as well as other journals.

Roy Seeger’s poems are remarkable. Disquieting and disruptive, they reveal a world where connection is not what we think it is. In this elusive, illusory terrain, typography illuminates, sounds echo, and images refract. Birds abound with meaning, and whoever we may have been at the outset, at the last we are one with Seeger’s Midwestern Agnostic. Like him, we are left with the poet’s heartbreaking, ironic assertion. We are, for now, enough.

Roy Seeger writes the poetry of a permanently confused man, a man “drowning in a room / of fumbled versions of myself,” finding life to be “a rhapsody of drive-thru combinations,” constantly aware of “the misused ashtray of my days // collecting change.” Metaphor gives him his best chance at intermittent relief from perplexity, though on this earth that relief may never become “a beautiful stillness.”

It may be hard to believe, but this collection seems to be exactly what its title claims. “Attentiveness,” Malebranche said, “is the natural prayer of the soul,” and in these poems Roy Seeger turns an especially attentive eye and ear to everything—from small birds and loose change to Hogan’s Heroes and Taxi Driver and Scooby Doo. And the result often feels something like prayer as much as poem—like a small green shoot breaking the soil of a gray desolation.

—Dan Albergotti (author of The Boatloads and Millennial Teeth)

And so the body betrays itself—you
know better than anyone the law
of actions & reactions, but there
you are, a switchboard with every circuit
on overload. We could draw lines all day,
we could be fucking Matisses
& nothing would change. No words
we say will change what we say
of history. Say this is the story of a girl
who looks like her mother.
She started over with everything new, but say
this time as a blonde, this time
completely different. It’s immaculate,
this new version of herself glowing,
teeth rendered a touch smaller.
It gets so even my dreams exhaust me—
in this one, she’s growing smaller
as I approach the horizon.
The background music is classical, mostly strings
punctuated by a tuba blurting “Me! Me! Me!”
Then a tenor horn points into the shadows,
threatens to put out every light in the sky.

Because what we imagine keeps us from harm does,
I keep, in my pocket,

a railroad-flattened nickel
& a packet of salt. And so this is life:

a rhapsody of drive-thru combinations,
a ticker-tape of receipts

crumpled on the empty passenger’s seat,
the misused ashtray of my days

collecting change. And to protect this bounty
overnight—a string tied

to the car’s unlockable door, draped over a low
tree limb & tied to (of all things)

a copper bell— to warn me, to draw me in
to this precursive dawn

before the sun rises to melt frosted surfaces.
And to whoever tripped

And so the god of pent-up sorrow
returned to us, reawakened
as a dead barn swallow
whose moldering feathers curled

away from the sidewalk in a mockery
of flight, its only song—
too late, too late. And yes
here we are: different versions

of the same ghost, yes
collaborating on songs that pay
homage to what’s best left to
the consolation of the here-

after—life & what irrational hope
we offer to this broken husk of bird.
And voices return it to a life
of irrational angles & terrible yes!