Raft Made of Seagull Feathers 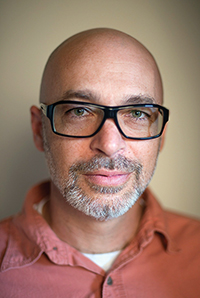 Scott Brennan, originally from St. Louis, Missouri, is a writer and visual artist living in Miami, Florida. His poetry, photography, visual art, and essays have appeared in a number of magazines, including Smithsonian, Harvard Review, Notre Dame Review, Gettysburg Review, The Sewanee Review, The Journal, The Berkeley Journal of Sociology, among others. He attended Truman State University (BA English) and The University of Florida (MFA Creative Writing).

There’s nothing quite like hearing a new, fresh, clear voice in the often off-key chorus of contemporary poetry. Scott Brennan combines a straightforward tone with an agile knack for associative hopping. The result is a debut collection bursting with smart, genial poems laced with surprises. ~Billy Collins

The best lyric poets share with their readers life in all of its conflicted dimensions—physical, psychological, intellectual, spiritual. No small feat. In Raft Made from Seagull Feathers, Scott Brennan achieves this rare thing. The book, which coheres so beautifully, is, at the same time wide-ranging. From the luminous opening poem, “Architeuthis Clarkei, the Giant Squid,” to the lush, nuanced, heartbreaking “Italian,” to the wickedly funny “Notes on the Removal of the Human Heart,” to the exquisite and devastating “Broken by the Flood”—these poems and so many others plunge us into lived experience. Mature, clear-eyed, and musical, this collection, pitching wry humor against searing loss, acquaints us with the saga of the aging schoolteacher “Grey,” with visual art (high, low, and imagined!), with the sensuous landscape and culture of Italy, with the rise and fall of a marriage, and perhaps most of all with the sea—its strangeness and unpredictable nature and sublime beauty. ~Ashley Mace Havrid

Scott Brennan’s Raft Made of Seagull Feathers interweaves personal, literary, and historic tales with deft skill and heartfelt concern, as his speakers search for the thing that will unlock the world and reveal its true shape. That unlocking never happens, but the search continues. These are not poems to comfort you in the middle of the night. These are poems to unsettle your comfort. These are poems that worship the holy act of creation while also questioning what it all amounts to, after all, when happiness is a fleeting sunset on the Gulf, or a mission to knock ripe mangoes to the ground. Brennan’s poems inhabit everyone from Meriwether Lewis to Andrea Piazza to Ahab, attacking gigantic myths and figures in monologues once funny, erudite, and sad. But the poems also zoom into a life’s minutiae and whisper the things we usually aren’t courageous enough to admit: “Now I am trying to break your heart;” “I have allowed everything to fall to ruin;” “I turned my back to you.” This is the book of someone who has lived and read and felt deeply, and it deserves your attention. ~P. Scott Cunningham

None
yet caught,
though five or six

wash up each year,
too late, lamps
burnt out,

with the current hangs
tentacle lures, but,
once stranded,

it seems to say. Not much
happened. The
end. I poke

with a stick
to see
what moves. Easily,

of an egg, this
blind eye
rolled. Nobody

walks the strand. The sky,
it’s as dull as the squid.
Another lost giant,

another Gulliver,
I think, but this one,
here,

two sheep, three sheep. . .
One can see,
in the distance,

a small town,
the white birds perched
on the black cliffs.

Andrea Piazza in His Studio

Piazza stretching his canvas now,
Piazza mixing his paint—the umber
for the uniform of the soldier,

the lavender for his fistful of flowers.
Piazza opening the shutters to let the light in,
to let the sea breeze in. (It whistles

through the slats like an asthmatic for his dog.)
Piazza at the window having a smoke.
Piazza on the sofa taking a nap, his mouth open,

snoring. Piazza dreaming, eyes left
then right. His wristwatch ticks.
The clock on the mantle changes

from three to four. Piazza waking up
to a knock on the door. Piazza turning the knob
to find nobody there, the hallway empty,

except for a cat. It arches its back, hisses.
Piazza turning as the wind fills the curtains,
a giant bridal gown without the bride.

In the Design District

The windfall mangoes on the walks are ripe
in this appreciating urbanscape
with rows of houses and shop spaces for rent,
the real estate not as cheap as we want
but in tier after tier of potential,
buildings for revision,
perhaps an art gallery here, a coffeehouse there,
or maybe a day spa or a furniture showroom
with a name like Old Siam or Unique Domain.

The neighborhood is shaded by royal palms,
though one of the storms has blown a few down,
the sea breeze still capable of seducing
each squinting newcomer in a U-haul
who hopes something fresh can still be written
in the caked, colorless sand.

The macaw in Luna Star Café shouts
“Outside!” and “Rain!” It flicks water
into the cup of its beak with a black,
thumb-like tongue. The beak can crack
a walnut shell or a chicken bone.
“Pretty bird!” it calls. Then, “Treat!” It pokes
its head through the cage for a scratch,
the irises luminous green, but the pupils
dilate, and I pull away. Opening wide,
zeroing in–the telescopic eyes of a parrot
with an old woman’s voice, a dragon’s feet.