($3 if ordered from the MSR Online Bookstore) 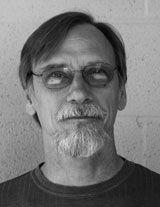 Bill Wesse
Bill Wesse is a former cold war USN submariner, a software mechanic (27 years with Microsoft), an occasional and erratic writer, and an advocate for people affected by mental illness. He detests whole wheat paper napery, and lives in Matthews, NC with his wife Lyn and several rescue cats. He’s also a former partner at Main Street Rag and has had his work published by Iodine Poetry Journal, Independence Boulevard, and Thrift.

For Bill Wesse there are no absolutes, at least my in reading of his unique work as he begins with “One thing like another — / how green paint visibly peels from dry wood, / exposing the true definition of gray, / the universal and apparently causeless extinction of frogs.” Maybe I’m stretching the metaphor, but Wesse does seem to expose the definition of gray as he explores the world around him with the eye and reflection of a philosopher, yet he shifts from “the wedding of time and nothingness” to the “(taste) of warming dregs of bitter lager / foam subsiding like piss in the gutter,” shifting from the epistemological to the existential as he displays an affinity for the small yet larger questions and the bigger picture of things throughout this collection. His work can be biting yet playful at times from his stream of consciousness reflected in “A Shipwreck in Wyoming” to his lighter feel in “The Angry Ghost of William Carlos Williams.” In a way he evokes Plato’s quarrel between philosophy and poetry, the tension in the fiction of Camus and Andrew Vachss, yet in the end Wesse gives us “One more light. / One more yawn, / One more circle in the friendly silence.” Read this collection. If I may borrow from Dylan Thomas, it will help you understand yourself and the world around you.

The Universal and Apparently Causeless Extinction of Frogs

One thing like another —
how green paint visibly peels from dry wood,
exposing the true definition of gray,
the universal and apparently causeless extinction of frogs.

An abandoned bowler hat molders on the closet shelf,
an empty yellow dress deflates atop the threadbare quilt
one chilly April morning, washed in clean yellow sunlight —
an oxidized aluminum spoon, also illuminated,
reflects a cold pizza, folded back upon itself.

A metal runner borders an immense carpet,
whose musty fragrance obscures
the clean and bitter smell of the salt Pacific,
a reminder of the non-evolution of horsetail grasses
and inedible horseshoe crabs concealed in the shallows.

A foggy sea blends into the invisible horizon:
there is a lack of a boat to take me to that place,
in the subtractive manner that memory uses to create perfection
(or how that cubist girl walked down all the stairs at once).

It is impossible for that salt water
to completely evaporate from canvas shoes,
and notice how your canvas toes
wrinkle in the dampness.

A neglected cut-rate dinner nearly fills an open number 8 can,
teardrop blue flames outgas above a chipped porcelain stove,
nearby the original Houdini-proof icebox
with moveable handles and an integral freezer
that will not close upon the glaciated crust of ancient rime.

Everlasting grunted warnings sound at dusk,
resounding from the throats of lowland horns,
and propagate through endless fogs,
where dry rot has already consumed the boardwalk.

This is a place to never be again,
at the wedding of time and nothingness:

In the Hospital for Dreams

Somewhere closer than skin,
a door swings open open once more,
allowing the occasional draft to trail
casual fingers chill across the nape of the neck,

to remind an earward curving cheek
that yet another red surprise awaits.

Already in a hesitant line of one or more,
alone on the tan shoreline by a blue-gray sea
of naturally antiseptic linoleum,

sunk to the chin in some disconspicuous fog,
the mingled stringencies of isopropyl and formaldehyde
pass arrogantly between those faces and my silences.

By the middle toe of the left foot
a disconnected spatter of pale blood,
or murky plasma, has dried marooned:
an island on a polished sea of wax.

Up against the farthest wall,
the sharps disposal unit waits to receive
another special delivery
addressed to our casual mistakes.

An untied balloon that fizzles to a halt,
Depleted and puckered atop
The disarranged bedding of an empty gurney.

Somewhere near the grasping hand,
A well-oiled door swings shut.

The First Ever Zero Gravity Meal

while miles outside the Baikonur cosmodrome,
a chapped, reddened hand bends a bare
and tattered stem into a furrow of wintering earth.

We are digging in her resting place again.

It is said a bark resounded within the stifling can
stuck atop the Sapwood rocket’s second stage shell
where that most human of sacrifices was bedded down:

No more running free in winter streets for little barker.
No more begging scraps from the neighborhood butcher.
Just a few mouthfuls of the first ever zero gravity meal
and a parade of lonely heartbeats in the dark,
after the slow realization that no answer would come
to the once-good natured yapping.

In the tenth day of fitful confinements,
the inevitable heat began to mount
as the booster warmed in the upper mesosphere,
at the wide-eyed commencement of that carnival leap
into a fatal halo of refiner’s fire.

Perhaps the thin sound of rushing air
whistled through the silent, padded walls
as a final call to tail thumping
anticipations of returning home —
perhaps not.

Laika, did the hand that locked your cradle
caress your mongrel throat
before the silver bullet shot into the endless deep?

The Angry Ghost
of William Carlos Williams
Rises Up Behind Me

so much depends
upon

having dreams
in which

one is not
menaced

If you would like to read more of Rebus Mundi by Bill Wesse, order your copy today.