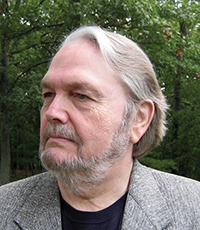 Philip St. Clair has published eight collections of poetry. His awards include the Bullis Prize from Poetry Northwest and fellowships from the National Endowment for the Arts and the Kentucky Arts Council. He has loaded aircraft in the Military Air Transport Service, mopped floors in a student union, tended bar in an Elks club, worked at the editor’s trade (both in-house and freelance), and taught at Kent State University, Bowling Green State University, Southern Illinois University, and Ashland Community and Technical College. He lives with his wife Christina in Ashland, Kentucky.

Philip St. Clair pulls readers right into his worlds, with a deft flick of color, a slower glimpse of souls. He shows us a woman driving a car—“the ball of her foot/ throbbing from all that power” and we drive to the next poem, following a quest to find God in the dark skies. I travel with Phillip, gladly, up to the stars and back again. ~Cat Pleska, Riding on Comets: a memoir

In this latest collection of poems—many based on the working class experience—Philip St. Clair has written new work that is poignant, straightforward, imaginative, and also nuanced and surprising. These are poems to be read again and again. ~Eliot Parker, award-winning author of A Knife’s Edge

Many of the poems in Philip St. Clair’s sure-handed and wonderful new book are stories of loss: the boy who crashed his motorcycle and crushed his leg, “which had to come off right away,” the woman whose husband turned 50 and left, forever, to “the Sunny South of Florida,” the man on a flight to Chicago who died soon after take-off, slumping on the speaker’s shoulder at touch down. But St. Clair can play other notes too. Two of the strongest poems in the collection are the hilarious “Poker,” inspired by a New Yorker cover featuring seven former U.S. presidents in a not-so-friendly poker game, and “Big Dogs with Money,” the canines splitting their lottery ticket winnings and spending some happy doggy time on the town. Red Cup, Green Lawn is a book you’ll love and want to return to. ~Jeff Worley, Kentucky Poet Laureate, 2019-2020

Philip St. Clair is the noir detective staking out the neighborhood, writing poems about people who would never read them, mocking, sympathizing, honoring. Read him to know the pleasures of a knifing phrase sudden as a shark; read him to follow narratives that might out-twist O Henry or break your heart; read him to slyly sneak up on hope and spirit. Read and be changed. ~J. Tarwood, author of What The Waking See as well as And For The Mouth A Flower

A young boy is in the bed of a small gray Nissan pickup on 101 to Ventura:
he has wrapped himself in a blanket;
he lies on a thin mattress and looks up at the sky. It is dusk, and the washes
of pale pink and pale mauve
that color all of southern California have deepened to pastel. His parents
must have told him
to keep his head down and keep still, for he lies there immobile, arms stiff
at his side, in a wide-eyed trance.
Now he has escaped from that Fifties rock-‘n’-roll on the oldies station
his parents play in the cab
and the highway that always rushes at him to vanish past his ears
like the video game he hates
and his parents’ never-ending talk: their jobs and the rent money
and the spiteful and ignorant things
the people they know are doing all the time. Now the green route signs
are flashing over him
much too fast to be read: the streetlights are white-hot comets whose orbits
are bright straight lines
and the full moon rolls over him on a path from the left front headlight
to the right rear taillight.
And as he looks at the patterns of stars that are light years removed
from the frenzy just over his head,
he thinks they could be skeletons and imagines them with muscle and flesh:
then he looks for the best ones
and lines them up and gives them helmets and shoulder pads and jerseys,
and when the truck hooks a sharp right
to the exit ramp near home, they circle each other, keep their distance —
how wary they are, how brilliant their numbers.

An old man and an old woman sit together on a green wooden bench
in front of the local rest home, staring at rush hour traffic.
The man sees a beat-up Chevy with a loud muffler stop at a red light
so he tells her about the time the phone rang at one AM
and when he ran downstairs to answer it he damn near broke his big toe
on the leg of the sofa. It was his brother
all drunked up calling from the beer garden to tell him that the war
was over but it really wasn’t over and his wife
got real angry: she said she was going to call his brother up on the phone
and say right to his face just what she thought.
The woman watches him as he tells his story, and when he has finished,
she reaches out to him with her fingernail,
gently scrapes a bit of egg yolk from his sleeve. The man looks at her
with an expression of affection and amazement
but she takes no notice. The woman sees a truck with a Pepsi-Cola logo
make a left turn so she tells him about the first house
she and her husband ever owned. It was nice and it was near the river
but she never really liked it:
she was afraid the water would rise too high and wash everything away.
She didn’t want her boys swimming
down there, and once she told them that if they ever came back drowned
they’d get a whipping: the boys
got to laughing so hard that she laughed too. But that next year the river
rose up to the bottom step so they moved to town.
The woman plucks a hankie out of her purse, dabs at her mouth. Suddenly
a gust of wind snatches it out of her hand
and rolls it toward the highway—the man gets up and shambles after it.
“Come back! Oh, come back!” she cries, but he does not hear.

I first met Bobby Jark in 1968: field jacket, blue jeans,
two-tone cowboy boots, hunched over the bar
at the Hard Times with a shot of VO and a fishbowl of draft–
an ex-GI back in the college town where he grew up.
He was a two-tour Vietnam vet unable to make it outside,
couldn’t hold a job, couldn’t keep the wife and kid.
Liberal-arts types who hung out there stayed away from him,
said he kept a pistol tucked in the small of his back,
but he didn’t frighten me: the neighbor down the street
went to France in 1917 and fought in the Argonne
and the guy who ran the Sunoco station marched with Patton
to Bastogne and my cousin’s husband got shot
in Korea and I got sent to Florida for the Cuban Missile Crisis.
When I went to college on the GI Bill I got to know
some other Vietnam vets but none of them seemed as needy
as Bobby Jark, who once told me, close to tears
in a booth at the back of the bar, that he started to really like
the killing he had to do. In 1970 I got accepted
into grad school on a teaching assistantship: I drifted away
from the Hard Times but I couldn’t get serious
about those comprehensive exams for the Ph.D. program.
I scored just enough to get my Masters, and then
it was pickup bartending and two sections of adjunct comp
while the semesters rolled over into academic years.
I had my pride: I thought those teaching-English-abroad gigs
were nothing but exile for second-raters, but once,
after a maudlin weekend re-reading The Alexandria Quartet,
I air-mailed my resume straight into the heart of Teheran:
they never replied. This was before they kicked out the Shah
and set up the Ayatollah as Leader of the Revolution
but it was after someone told me Bobby Jark had shot himself
with that Colt Commander he’d picked up in Saigon.