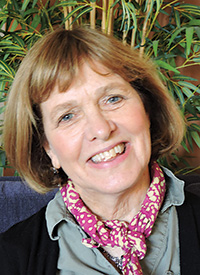 Gail Hosking holds an MFA from Bennington College and taught at Rochester Institute of Technology for fifteen years. Her work has been anthologized in several books and her poems and essays have been published in such places as River Teeth, Timberline Review, Lillith Magazine, Camera Obscura and Post Road. She had a special mention in The Pushcart Prize Anthology and was a finalist for several poetry and essay contests. Her other books include the memoir Snake’s Daughter and the poetry chapbook The Tug.

Gail Hosking’s Retrieval examines the collateral damage of war and its legacy on those who are left to tell about it. Guided by the whispers of absent loved ones—a father killed in action, the weary mother who was left to soldier on—Hosking navigates the rough waters of memory to arrive at “a calm settling inside me, my heart/opening like the rushing river.” ~Sarah Freligh

My father put together survival kits, stashed
bandages and sulfur tablets
into shoe polish tins, inserted razor
blade and match like a puzzle,
his tongue between his teeth
concentrating like a character
with his script of danger, his story of men
in uniform searching for one
specific thing that might save
what was already lost. I watched
as he slipped in a round of chocolate,
believing there would always be some
item that would make a difference.

While soldiers do push-ups on parade grounds
and sign papers of mission first, my mother
hangs diapers on community clotheslines
at Smoke Bomb Hill. Picnics on a rifle range,
parachute silk turned into bedspreads, men
rarely out of uniform. A soldier’s pay
will have to do, my father writes her
from the Language School in Monterey.
She drinks coffee in trailer parks
with other wives, all of them waiting
for payday, deployment, mail. Promises
disappear with her black eye, rubbed
like polish my father brushed
into his boots, assurances stored with the bedroom
gun collection. One night at the Enlisted Men’s Club
she takes that first drink and never returns—crazy
as that sounds. With each swallow hope
travels over the fortress walls, to some dance
she always imagined, some place
she wants to call home. Some peace.

Notes From the Underground

When I pick up written notes
after phone calls from the other men,
I recognize I’m holding the dead. The ones
in the field with my dad that day, the ones
who knew the war was run by politicians
but went anyway because that’s what soldiers do.
The ones who help paint a picture—a case of hand grenades
under my dad’s cot, how he touched your shoulder
when he talked to make sure he had your full attention,
spoke with the Cambodes in their language.
His immaculate uniform, his high-pitched laugh—
it’s all there scribbled on paper.

In a leafless forest, not a bird
in sight, I am unable to invent
forms to accommodate that loss,
or to throw the notes out as though
I might bring my dad back just by keeping them
together with a paper clip. As though it’s me
and me alone who must remember. And for what?
Viet Nam is passé, an editor tells me.
But these men, I want to say, these men.
When I see that the Silver Fox
in Alabama has died, why do I weep? Why
do I need to tell someone I don’t even know
how the team house at Long Binh caught on fire
until it got to my father’s room, how he made a run
for it just in time. How a stranger identified
my father’s body—what was left of it—waited
for the plane to pick them up, zipped him in a bag.

There’s no getting anything back from the dead.
Their memories are mine now.
The poet who never went to war,
the woman walking in a crowd,
seeing it all like a movie that keeps playing,
the one still staring out the window,
trees poking up through the snow,
hearing a requiem that refuses to end.

On the Bus to Da Nang

On the hairpin turns of Hoi Van Pass
a former soldier tells me there are no
syllables in Vietnamese. Be sure to notice
the mountains above the South China Sea, sounds
of geese and thorn bills. He points
like an expert to the rice paddies
on our right and the endless varieties
of jungle green. Bent pines
like the coast of California. He mentions
Marines arrived below on Red Beach in ’65,
how they stayed until the end of the war, somewhere
north of Happy Valley and GI Plateau. The only remnant
left, a stone wall of a PX, its foundation
like the forts I created as a child.

Outside the window, a woman older
than that memory carries heavy bags of bread,
head topped with a sedge hat, her clothes the same
black pajamas my father wore sitting on the floor
in southern Illinois. I look for what I share
in this nucleus of place, desperate for parts
to add up, some poetics of understanding.
Desperate for the pieces of war to become words
I can borrow and then speak.