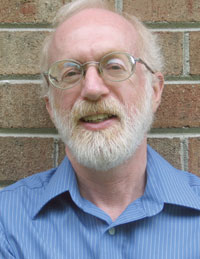 Eric A. Weil, son of a high school music teacher from New York City and a graphic artist from Boston, grew up near Cleveland, Ohio. He taught handicapped children for two years in Ohio’s Amish country, then moved to North Carolina, where he finished an MFA, and later a Ph.D., at UNC Greensboro. He is an associate professor of English at Elizabeth City State University. He and his wife, Anne, have two grown children.

… This poet shows in both story-poem and charged lyric that he knows his subject matter to its heart’s core. He knows too the poet’s obligation of respect for what he writes about and for how he writes it. Admirable!

Was it when the red world
grew larger than the blue world
shrinking behind us? Or was it
setting foot in the drifted dust
of the ancient red oceans
of our dreams when “home”
underwent some cosmic shift?
We rover-rambled, planted our flag
above our war-wracked planet’s
“Plaque of Peace,” stuttered
humble words for history books,
snapped thousands of photos.
We’ve stowed gear, stored rocks,
filed scrapings that scientists
and the mad, lonely public hope
will reveal life. Which is worse —
to discover that we’re alone,
or that we’re not? Maybe
we weren’t, but now we are.
What the red emptiness means
is unknowable, absence the only sign.
After the roar, the computer plots
trajectory, times the rocket burns.
Months of blackness lie ahead,
a weightless return to a fractured
world damp with blood. Here’s
my news: that thin, rosy sky
with two moons claimed me.
I have become the life we seek.

Behind my eyelids, I can do anything.
In dreams I’m walking, but the flash opens
my eyes to my sad mother. Better dead
than a burden. Better to bleed in the desert,
remembered with a folded triangle. I saw it
just before it hit our truck. The future
she hoped for me is gone. I cut loose
my girl, saw her face — relief. Strange,
how it looked like Jack’s last breath.
The flowers are better saved for the dead,
for Jack, whose guts steamed in my lap.
She presses her chest as if she’s holding in
her heart. My old man moved his gun,
I take a pain pill and wait for dreams.

I voted for you, Mr. President.
You sent my son to your war
and got him paralyzed. Thanks
for the nice letter. “Sacrifice.”
The word is empty, the vase
after the flowers have dried
to trash. He sleeps, says
it’s the only time he walks.
His mother (hardly the scent
of “wife” remains) stumbles
robotic through her days. I have
to work, I want to work, I must
be strong, for them. The son
I raised is gone, Mr. President,
the grandsons I imagined, gone.
I pulled my tour in Vietnam
unscathed for this? He didn’t die,
but he disappeared with the dead.
Last night I heard him drag
his useless legs to my desk,
searching for my old sidearm
like a drunk pawing kitchen cabinets
for more booze. I sold my gun.

I stare at my camellias behind the garden.
My life moves sluggishly, a river of sighs,
my paraplegic son asleep upstairs. Explosions,
nightmares. In the kitchen, dishes wait.
I have a secret, small flame in my breast,
my packed fist presses against the hurt.
I force myself through housework,
return to my camellias, blooming yellow
as lost dreams, white as gauze, pink as scars.
When my husband arrives, I kiss him
and serve a silent, untasted dinner for three.

FOR MY STUDENT, MURDERED
BY HER BOYFRIEND

Four days, beetles and blueflies
began the job of turning you into forest,
a more substantial transformation

than any in the poems and stories
we read. Four times, the moon
pulled the stars over your face

like a sheet which the sun peeled back,
until a hunter stumbled on your body.
City girl, stranger to thick trees and brush,

in breathless rest nuzzled by sowbugs,
perhaps you thought the leafy canopy
was a heaven greeting you, merciful

evergreen arms. Perhaps the journeys
of Odysseus and Dante, even while
your dreams, like fledged wrens,

fled your dulled eyes, brought
some comfort with their human hope
that the imagined death is worse.