PLEASE NOTE: Ordering in advance of the release date does not mean the book will ship before the date posted above. 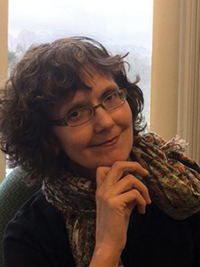 Sharon Ackerman holds an M.Ed from the University of Virginia and lives near the Blue Ridge Mountains of central Virginia. She spent childhood summers visiting southeast Kentucky where her ancestors established themselves over hundreds of years. Her poems, written from the perspective of being a child of the Appalachian Migration, are built upon the cadences and stories and natural elements of the region. Sharon’s poems have appeared in the Northern Virginia Review, Atlanta Review, Poetry Virginia, Heartwood Literary Magazine, Streetlight Magazine, and several anthologies. She is the winner of the Hippocrates Poetry in Medicine international contest, London 2019 and is the current poetry editor for Streetlight Magazine.

Sharon Ackerman’s Revised Light is a search for meaning in the gathered fragments of what has gone missing from our lives. From the loved ones we have lost to a sense of place skillfully crafted from the lush, often sensual imagery from the heart of Appalachia, Ackerman’s is a world where who we are and where we are from are the same, time being the only thing that separates the two, time and the hope (from “Ode to the Missing Piece”) that if one of these fragments “went missing//the whole picture wouldn’t vanish.” ~James Alan Riley, author of Broken Frequencies: a book of poems

“For what is faith but hickory smoke/and continuity, one of these hills running/into the next, never-ending?” Sharon Ackerman asks in her gorgeous new collection, centered on the Appalachian Mountain community of her grandparents. Novelist Pat Conroy contends our history is our geography, and Ackerman maps her childhood here in these lyrics, recording every detail of that world. It’s the ground of her making, despite where she has lived for most of her life. “The ground has final say,” she says, and so it does, and it “…calls out names to the verge/where stars disappear/and return young again.” No matter where you call home, these poems call you there, with a longing like no other. ~ Rita Sims Quillen, author of Wayland and Some Notes You Hold

Below the reach of the sun’s
eye, leaves a foot thick
long past their quivering
towards light, cover
a man’s bent pocketknife
dropped years ago,
barbed wire sunk and circled
around it. Worn at one end,
a trace of the thumb
that worried it to dirt,
rooves of fallen limbs over its glint
numb with rust. One blade glows
like it still has a pulse,
reminding of things imbedded
so deeply they are seldom
unmoored, but remain on the forest’s
threshing floor while a man
searches for what he’ll always miss,
what he knows is still there.

Of Mountains and Memory

Nineteen summers, one reunion
and a funeral mark the times
I’ve crossed Black Mountain.
It is early November, red maple’s torch
defies winter’s call, hobblebush
or elderberry blaze, bartering
for last light. A full frost moon
climbs the summit out of breath,
hovers once risen over the old
blood stains of Harlan county.
I still hear tinny gospel sung
above a man’s open casket, un-breaking
the circle where a family wept
for time that wouldn’t grow back,
not one inch of it.
Embalmed, his mouth curved
like a cat’s, the last they’d see
of him in this world
except in dreams or half-melted
shadows cast among hardwoods
and creeper. Gone as the dark
panther, extinct from this hill
though there are always the few
who claim to see the vanished
animal, eyes like yellow headlights
trailing slowly away.

Hiraeth is a Welsh concept of longing for home. Many Welsh people claim ‘hiraeth’ is a word which cannot be translated.

Neither sickness nor longing
but a remembered shape
held as petrified forests hold trees.

Beneath the tides, hazel and birch
four thousand years old
anchor the shore like granite,

My father’s voice calls from a back door
though he is long passed.
Between his summons and my ear,
an acreage untranslated

but whose timbre I’ve heard in the bay
where a downed gull decays. Wing darkened
and drenched, a form waits to fill again.

Merch is the word rising from its bones;
ocean and daughter. Speaking as a skeleton
speaks through shining water.

People come home in the evening
to the grackle’s cry, windows
match-struck one by one, a gravel road
broken by small lights of gathering.
At our tables we speak the ancient tongue of family
and listen casually as lilies
who’ve grown thickly together, flaring
open, nothing between themselves and sky.

People return at sunset in diurnal habit
shedding manners and clothes, children taller
than the last mark on the wall.
Night creatures weave their slow songs
between tines of clattering forks,
as basil scents of a kitchen
fill the dusk, scoring the heart,
telling us we are older than we know.