Ringing in Your Ears / Matthew Fiander

Ringing in Your Ears

An Advance Sale Discount price of $10 (+ shipping) is available HERE prior to press time. This price is not available anywhere else or by check. The check price is $14/book (which includes shipping) and should be sent to: Main Street Rag, PO BOX 690100, Charlotte, NC 28227-7001. 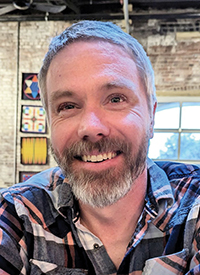 Matthew Fiander was born and raised in Weymouth, Massachusetts. His fiction has appeared in Story Magazine, Zone 3, Willow Springs, The Massachusetts Review, South Carolina Review, South Dakota Review, Reckon Review, and elsewhere. He has also published articles in The New York Times and Our State Magazine, and was a long-time music writer and editor for the online magazine, PopMatters. He currently lives and works in Winston Salem, North Carolina. Ringing in Your Ears is his first novel.

A character-driven drama and a twisty page-turner, Ringing in Your Ears has everything you’re looking for: thrills, surprises, lyrical prose, and a sprinkle of 90’s music nostalgia. Brilliantly plotted and paced, Fiander is a writer to watch.  ~Meagan Lucas, author of Songbirds and Stray Dogs and Here in the Dark, Editor in Chief of Reckon Review

I don’t know if you ever had days like this, or if youth is immune to them, but there are times where the pain triangulates. It tracks you. Attacks from all angles. Just tries to flat mow you down. Death by a thousand cuts. That kind of thing.

Yesterday was one of those days. Mom called, the first cut. Not her, what she found.

She and Dad are selling the house, finally. “We’ve made our point,” is how she put it. “But we found a tote of cassettes I thought you might want. It was buried,” she began.

“Second drawer of my childhood dresser, back-left corner, the clown-nose red one, tucked into the back of my bedroom closet.”

“Of course you remember,” she said. Because she thinks I have a photographic memory, but I’ve never called it that. Because once you label it, you have to live up to it. Everyone expects you to remember everything. And what if I don’t? That’s what I said to Mom and Dad when I was young and what I say to myself, and to you I guess, now. What if I just remember in visuals? Is that the same as photographic, as eidetic?

I’m losing the thread. Or stalling, because those tapes are the main point here. Your tapes. And Mom is sending them to me because she couldn’t throw them out. Because I couldn’t say no.

I got off the phone with Mom and was picturing that brown-paper wrapped package of all your old tapes flying its way to me, and what I didn’t tell Mom as we spoke was what shone harsh and bright on my computer screen. The ones and zeroes, some form filled out on some website by a woman named Brittany Holden, Dorset High Class of ’92, a girl I did not know and do not remember — no image there at all — who sent me an electronic invitation to a 30-year reunion. And, as you know, if you can know, it is not my reunion. It is yours.

But I’ve received the form electronic invitation with one small note from Brittany added to the bottom. “We’re planning a tribute,” it read. “We thought you could say a few words.”

They didn’t even bother to use your name.

At least Mom’s call and the invitation were up-front attacks, the grief walking right up to the front door. The tapes stuck, flooded my head, shouted over each other.

As if pain needed to creep in through the window to place this last thin blade between the ribs.

And no, of course I’m not going to that reunion, but who doesn’t think about what they would say if given the chance? What story they would tell?

This is the story I would tell, the one I should have told that church full of people two decades ago. Yes it’s a baseball story, but it’s not about me. I promise. It’s about you. About us. I was too lost then to work out what to say. But these are the words I should have echoed off the cold brick walls of that church:

It was my 15th birthday and we went to a Red Sox-Angels game. We nearly missed the opening pitch because Dad misplaced the tickets. (Mom told him to retrace his steps. “What for?” he said and turned to me. “Blue where’d you last see them?”) You, me, Mom, and Dad squeezed into bleacher seats for a night game at Fenway. The hard seats reminded me of the bones in my body. Next to me you fidgeted, turning at a half-drunk shout from behind us in the second inning, idly tracking vendors through the aisles, sitting up when the crowd roared for a Wade Boggs double in the third, leaving for the bathroom twice before the fourth. Mom and Dad chatted quietly on the other side of me, clapping politely along with the crowd at the odd, good play. I didn’t hold it against any of you; baseball was my love, not yours. But you all came. We ate Fenway Franks and you, Christine, bought me a program. We’re here, I told myself, but I kept drifting away from the game to look at the Green Monster, standing sentinel and solitary over left field, its slack netting swaying above it in the night.

I kept score on the insert enclosed in the program. Wally Joyner ended the top of the fifth for the Angels with a ground-out to second. I marked it in the scoring sheet. 4-3.

“What’s that, Lou?” You asked as you sat back down. I showed you the sheet, and you didn’t shift anxiously, didn’t scan the crowd or yawn. I walked you through some plays. The Boggs double — one box with a line to first base, another to second, 2B written in pencil in the corner. Dave Winfield’s sac fly to right — F-9 in the box, but above that I shaded in Junior Felix’s box, who tagged from third to score the first run of the game. Jody Reed’s double play (6-4-3) after Luis Rivera walked (pencil line to first, BB in the corner).

“I get it,” you said. “So you can keep the game in order, so you can remember what happened when. No, not what, how.”

“Exactly,” I said. We scored the rest of the game together. I don’t remember who won, what shape the cluster of batted balls and strikes and plays and errors and runs and outs took. You were two years older than me and drifting away into parties and a boyfriend and the near future of college. Our orbits had shifted, widened. But there, in the bleachers at Fenway, on my birthday, we huddled our heads together. We talked and laughed and circled each other just a bit tighter. I marked every moment of it down. Kept track as best I could.

The church full of people, or reunion-goers doped up with nostalgia, they wouldn’t get it. But it’s the story they should have heard, one small shard in the mosaic of your life they never got to see.

The tapes, the invitation, the phone call, the childhood home sold. Small, everyday weapons, the blades of shovels that so easily dig up the loose soil of the past. No, digging unearths. Digging finds. But you’re still lost to me. Even all these years later. These people who can’t see memory, who don’t crowd their mind up with pictures, when they lose something, they retrace their steps.

If I retrace my steps, if I pull apart that how piece by piece, maybe I can finally find you.

I know what you’d say. You’d tell me I already know what happened. Why go through it all again? Why rehash it all? And why does it feel like it’s happening to you for the first time all over again when you do?

Those questions make me see one version of you, you just before it all happened, in bed with the stereo on, staring at the cover of the new tape you’d been listening to all week — Buffalo Tom, that weathered man in the sunken chair. You sang along, but sometimes your words didn’t sync up with the singer’s.

“You never read the lyric sheet,” I said.

You nodded. “I just listen over and over.”

“So you learn them on your own.”

“I mean, I don’t hear the same words every time,” you said. “I’m sure I hear them wrong, which just means different from who wrote them.”

“Why not find out the right words? If you love the song, don’t you want to know all about it?”

She shook her head. “There’s knowing and there’s knowing. I’m looking for the songs I can’t shake. Ones I can never quite pin down, that change, leave me searching. The songs that feel like prayer.”

“A little deep for this late at night, isn’t it?”

You smiled. “You asked.”

You shrugged. “Hell if I know.” We both laughed. We listened together in silence.

The words, whispery but powerful, seeped into my skin. “It’s that line, isn’t it?”

I saw your jaw set faintly. You quelled the urge to shush me. “What line?”

“That one he just sang, about Jesus Christ, that’s what made you think of prayer.”

You shrugged. “If you need a straight path, sis.”

“Who’s the other guy he mentioned? I didn’t catch it.”

“Search me.” You sat up in the bed. “I have no idea, but every time I hear it, I think something different. I see a different face, hear a different name. For that guy, for Jesus, for the voice singing. I wait for the song to tell me something new. That’s prayer, isn’t it, the same repeated words waiting for a new response?”

So there’s your answer, from your own mouth. Maybe that’s what this is. My own prayer, me playing the same song on repeat, waiting for something to change, waiting for you to appear in it all, to return.

That’s one answer. Or maybe it’s that every time I remember what happened, it feels like I’m forgetting all over again. The images — images of you, Christine, the stripped gears turning the dull machine in my head people call memory — blurring, fading away. The more I stare at them, the more I conjure you to the surface.

If you’d like to read the rest of this story, order Ringing in Your Ears and have it delivered to your door upon publication.