Rise from the River

($12 if order from the MSR Online Bookstore)

What would you do if you found yourself pregnant after being brutally raped?  Abort?  Carry the baby for nine solid months of everyday reminders of your night from hell and then adopt it out as if the nightmare never happened?  Keep the baby and raise it as if it wasn’t a product of unthinkable violence and invasion?

On a fall evening, 24-year old single mother Rainey Milbright walks through a park past curfew with her four-year old daughter, Tish.  A shadow steps out of the bushes.  Rainey knows what he is after.  Quickly, she tells Tish to run back to the playground, then she turns to face her attacker.  She is brutally raped.  Tish, who comes back, observes it all.

The reader follows Rainey through the next ten weeks as she struggles with the resulting pregnancy. Rainey is no stranger to the surprise of unplanned pregnancy, nor is she stranger to the joys and challenges that a child can bring.  She is also no stranger to abortion; Rainey became pregnant at the age of fifteen and aborted.  But this time, this isn’t simply an unplanned pregnancy; it’s a violent one, the result of a rape by a total stranger.  The book details Rainey’s battle as she fights with herself, her guilt, her grief and her own healing process as she tries to figure out the right thing to do.

Rise From The River is a brave novel, addressing many social and taboo issues, treating them with honesty and compassion.  Readers will go through this ordeal with Rainey, and come out of it with a new perspective, a deeper realization and a greater appreciation for the strength and resilience of women. 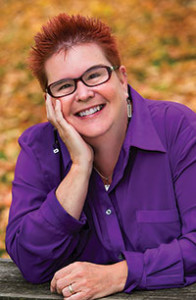 KATHIE GIORGIO’s short stories and poems have appeared in over 100 literary magazines and in many anthologies. She’s been nominated for the Million Writer Award and for the Best of the Net anthology and has been interviewed for articles in Poets & Writers magazine. She is the director and founder of AllWriters’ Workplace & Workshop, an international creative writing studio. She also teaches for Writers’ Digest and serves on their advisory board. Rise From The River is her fourth book. Her previous books are The Home For Wayward Clocks (novel), Learning To Tell (A Life)Time (novel), and Enlarged Hearts (short stories). All were published by and available through Main Street Rag. The Home For Wayward Clocks received the Outstanding Achievement award by the Wisconsin Library Association Literary Awards Committee and was nominated for the Paterson Fiction Award. It’s sequel, Learning To Tell (A Life)Time, debuted to a standing-room only audience at the 2013 Southeast Wisconsin Festival of Books where Kathie was the welcoming Keynote. Enlarged Hearts was selected as one of the 99 Summer Must-Reads in 2012 by the Milwaukee Journal Sentinel.

A skillful and nuanced story of the aftermath of a violent rape. The story builds as the main and secondary characters come to understand what has really happened—to the rape victim, to her young daughter, to her dear friend, and to her parents. A smart and heartfelt examination of complex issues of religion and morality. But it’s primarily a story of the quest by the very strong, though very hurt, Rainey Milbright, to find her way back to herself and her beautiful little family. –Martha Bergland, author of Farm Under A Lake and Idle Curiosity

Conception: Formation of a viable zygote by the union of the male sperm and the female ovum, usually during intercourse; fertilization.
Impregnation.

When Rainey Milbright slipped with her daughter into the dark park, she laughed, a quiet and deliciously evil laugh, and she felt like a child herself. “We’re not supposed to be doing this,” she whispered to Tish. “It’s against the rules. The park is closed, but just this once, this one time only, I’m going to let you do something naughty. Only because we’ll get home faster. We stayed too late at the custard stand. You’ve got school tomorrow.”

Rainey tucked Tish’s sweaty palm in hers and encouraged her to hurry. It was after dark and the park that ran along the Fox Riverwalk was supposed to be empty of visitors. Only the police, invisible in their black uniforms, skimmed through at measured intervals on their bicycles, scouting for intruders. Rainey hoped she would hear the smooth whine of their bike tires before they saw her. She would jump into the bushes, hide her daughter under the shelter of her shoulders, or stammer some lie about not knowing the rules, which were posted on large brown signs, lettered in gold, at each entrance to the park. Tish, she knew, would be delighted to be escorted home by the police. Rainey wondered if they would let the little girl balance on their handlebars, ride above their pumping legs. Tish’s smile and excited scream of laughter would almost make it worth getting caught.

The dark settled around them and the steady scuff of Tish’s sneakers against the pavement gave a rhythmic percussion to the soft drone of the Fox River. The quiet, the whisper of the river, and Rainey’s own surreptitiousness reminded her of the times she went night-swimming in college. Sneaking out of the dorm into a warm and muggy Missouri night, gliding with friends across sidewalks and parking lots to the lake, discarding clothes in silver moonlight. Slippery-skinned bodies startled in the cold splash of evening-cooled water, and always the necessary silence. Just shared smiles and suppressed giggles.
Rainey glanced at her daughter, the result of one of those nights. An underwater soft-moon mating that left Rainey on her own. She was the one who instigated night-swimming during finals week in the particularly hot spring of her sophomore year. From that time on, she’d accepted her responsibility for first the conception, then the raising of her daughter.

“Look,” she whispered now and Tish obediently looked where Rainey pointed. “Look how different everything is at night. See the swings? What do they look like to you?”

Tish shivered and Rainey felt the tremble of thoughts spreading from her daughter’s eyes to her brain to her mouth. “Vines,” Tish said finally. “They’re like vines in the jungle.”

“And the slide is an elephant!” Rainey said, happy to make the park a jungle in the middle of a Wisconsin fall, happy to make it green and humid and heavy with the sounds of birds and stampeding animals.

Tish smiled. “And the climbing structure…it’s a…it’s a…herd of camels.”

With her words, the lush green jungle turned to the brown of a desert. Rainey squeezed Tish’s hand and marveled at how a four-year old could use a sophisticated phrase like “climbing structure” alongside an impossible twist of imagination.

Earlier that night, they walked to the frozen custard stand, walked instead of drove because the air was cool and fresh and the leaves crackled much more sweetly under sneakers than tires. They slurped ice cream cones while sitting on a picnic bench. Tish’s vanilla formed a drippy beard and mustache that oozed onto her shirt, and the taste of last summer mixed well with the brilliant fall sunset. Tish jabbered about each new color in the sky, comparing it to pumpkins and tomatoes and cotton candy, and Rainey just couldn’t interrupt the steady stream of words and exploding sky to tell her daughter they needed to go home, to return to the routine of bath time and bed. When they finally threw away their cone wrappers and left, it was past dark. Rainey considered taking the bus home, circling around instead of cutting through the park the way they came, on the path that was the easiest, fastest way back. But it was late and there was still Tish’s bath and the every-night struggle into pajamas and through tooth-brushing. There was also the quickly decreasing time for Rainey’s own sleep before she left Tish next door with Doris, her landlady and babysitter, and rushed off to work in the morning. So Rainey chose the Riverwalk; she chose to break the rules.

They continued on, changing bushes to sand dunes, trees to pyramids, and it seemed to Rainey that the night went from cool to overwhelmingly hot. She panted and Tish panted with her, and they looked ahead for an oasis where there would be water and the sweetness of shade, even though all around them, it was already dark and a river flowed beside them, flecked with moonshine.

Rainey was certain she saw him first, before Tish did; the shadow that Rainey thought was a policeman stepping out of the bushes, a brave sheik after desert smugglers. But there was something about his posture, his body looming large, as he stood spread-eagled over the path, and there was nothing in his face that shone out of the blackness. Before he even took a step toward her, Rainey knew, and she grabbed her daughter’s shoulder.

“Tish,” she whispered. “Tish, run back to the climbing structure. Climb to the highest part where the little house is and sit there and don’t move until I come get you.”

“Mama?” Tish’s head swiveled between Rainey and the man that was moving closer.

And she did. She was a good girl, she almost always did what Rainey told her to do. Her footsteps rattled back up the path, but then Rainey thought she heard Tish stop. She tried to look over her shoulder, to see if Tish was still moving, still running, but the man was on Rainey then, shoving her off the path through the bushes to a little clearing right next to the river. The soft rush of the water grew suddenly louder as he pushed her to her knees.

If readers would like to read the rest of the story, order Rise from the River by Kathie Giorgio.