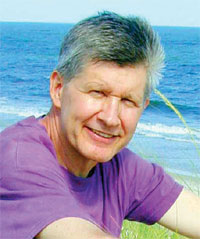 Mike Schneider is a former lawyer who works as a science writer and lives with himself in the historic South Side neighborhood of Pittsburgh. His poems in Rooster derive from a pastoral childhood in central Pennsylvania farm country and his relationship with his father, the Jehovah-like figure of his early life.

Schneider’s free-lance journalism is widely published in Pittsburgh publications and he received a 2003-04 Creative Artists Stipend in Arts Commentary from the Pennsylvania Council on the Arts for his essay-reviews on art and politics in The New People, a monthly newspaper of the Thomas Merton Center of Pittsburgh. In concert with the national Poets Against the War movement, he organized a February 2003 reading in Pittsburgh’s downtown Market Square at which 27 Pittsburgh-area poets (in 15 degree cold) expressed opposition to war in Iraq.

Some of the journals in which his poems have appeared include 5 AM, Antietam Review, Atlanta Review, Heart, The Ledge, Main Street Rag, Notre Dame Review, Sycamore Review, Paper Street, Poet Lore and Poetry. His poems have also appeared in several anthologies. Among them: Larger than Life (Black Moss Press, 2000), The 2001 Emily Dickinson Award Anthology (West Universities Press, 2002), and An Eye for an Eye Makes the Whole World Blind: Poets on 9/11 (Oakland, CA: Regent Press, 2002).

How can you lie there and snooze
when my father comes to roost
at dawn with his campfire guitar?
Nights in the kitchen, he’d croon
silvery moons, ragtime cowboys.
Then before the sun he’d rise,
sit with a mug of thick coffee
in silence, pack wax-papered
sandwiches, carefully wrapped
the night before, into his lunchbox —
black, a broken handle he’d fixed
with pliers and wire. He’d lift it,
cross Centre Hall Mountain, 14 years
walking the cell blocks, Rockview
State Pen, locked doors, sullen
men. Watched them till the cells
of his throat broke from their regulated life
into the unrepentant paroxysm of freedom
that choked and claimed him
long before he showed me
how to write this poem.
The dead stay with us in dream.
Awakened, I sit here getting a grip.
The woman he loved, my mother, alone
in the stone house where he withered —
thin, ghastly shadow. You
asleep beside me. Would I have the nerve
if you’re gone to go on lifting myself, weight
of the colorless sky? Would I play
that painted cowboy guitar, picking
the bass notes with my thumb
like a man who speaks no empty words
and sings the old songs? He opens
his throat to crow like a golden rooster
when the sky is pink and yellow and green.

Foam dripping from my chin
I’m slugging down fire-brewed Strohs
clear to the good-thing bottom of my mug
and there’s Ted Turner, the millionaire
yachtsman, looking right at me
from a Cutty Sark napkin.
Ramrod solid, tough as God’s truth,
Here’s to gut feelings
and those who still follow them,
he says through salt spray, a rippling jib.

Yeah, I say to myself
you only go round once,
and one more to the waitress
hiding behind her withered eyes,
puffy, like it hurt to get up this morning,
makeup layered over telltale purple —

tale that’s told when anger rises
from the belly, flashes red, lashes out —
factory man, the boss’s bad-day bullshit,
my father, fathers before him,
ramrod solid, tough as God’s truth,
strong as big wind and rain and blows
that fall when they fall, down the line
of gut feelings, those who still follow them.

Drop your underwear, he says
and lean across that chair.
I bare my rounded pound
of flesh. He loosens
from his slacks the leather
strap, lifts it up. Down
it slaps, a losing hand
of cards laid flat, read ‘em
and weep. Keep count,
he says. Two, three, slash
marks on my chalkboard,
black, no eraser. Four, five—
they sting like a hive of hornets.
The trick: be cold inside, hold on
tight as Sunday shoes, numb
as my thumb in cool blue
jelly, the plum of his eye.
Six. Soon I’ll be fixed.
Then I’ll grow up and shoot
a big gun. Lucky seven
rhymes with heaven. Eight
unlocks the pearly gate, cracks
the damn, I’m sobbing, a wretch.
This hurts me more than you,
he croaks, choked up and wet.
But a lesson had to be taught.
Yes boss. I love you too.
Teach me the laws to live by—
Get a good job. Cash the check.
Pay taxes. There is no Santa Claus.
Say goodnight, some quiet mending,
happily-ever-afters never ending.