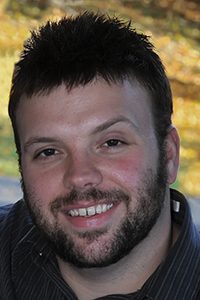 Kevin J. McDaniel is the author of two chapbooks, At the Foot of a Mountain (Old Seventy Creek Press, 2018) and Family Talks, (Finishing Line Press, 2017). He lives in Pulaski, Virginia, with his wife, daughters, and their menagerie of pets. His poems have appeared in the Anthology of Appalachian Writers, Artemis Journal, Broad River Review, Hawk & Whippoorwill, Heartland Review, The Cape Rock, The Main Street Rag, The Ocean State Review, The Offbeat, among others.

Kevin McDaniel is keen to learn why he’s here—to know why any of us matter in our radical small towns where birth is slopping around cut folds and a tornado can be created in a mason jar to dazzle the vespers crowd. The ghosts in Rubbernecking feel like cousins haunting daily mysteries with a higher path so hard to tread. ~Barrett Warner, author of Why Is It So Hard to Kill You?

Kevin McDaniel’s new poetry collection, Rubbernecking, charms me—growing up in small town Appalachian neighborhoods, early friendships and family habits become religious rituals. These poems are so rich with character sketches, story lines and landscapes it is difficult to summarize. Though community struggles are complex and real on a daily basis, there is something joyous about facing hardships together in a world rich with heritage, nicknames, fast cars and rumors of moonshine. McDaniel also has a penchant for legend, hometown dramas and the ekphrastic need to capture paintings with his words. These poems are so alive with sharp sensory images and skillful endings. Take this journey for yourself, find your own life in his poems. ~Bill Brown

Kevin J. McDaniel’s poems are oblique, integral engagements with the day-to-day detritus of life. In Rubbernecking, his luminous debut, syntax and image swerve to uncover profound insights into our collective existence. Where a philosophical lobster, “Depressed in an acrylic corner, / accepts his fate”; where people tell “[s]tories about tearing an old dish rag in half / at midnight at a fork in the road…” McDaniel’s poems call attention to detail, to the art of living. ~Charles Kell, author of Cage of Lit Glass (forthcoming 2019), chosen by Kimiko Hahn as the winner of the 2018 Autumn House Press Poetry Prize, and associate editor of The Ocean State Review.

In Rubbernecking, poet Kevin McDaniel, master of imagery, takes his reader on an amped-up ride. In souped-up cars, old station wagons and buses—homage to his father—he builds a kaleidoscopic crazy-quilt. His rubbernecking takes in “a wasp belligerently headbutt[ing] the glass,” “a lone buckeye bend[ing] in a boisterous wind,” “a buck hidden in brush studying an orange butterfly.” He arrives, appropriately, at his childhood home, hears “Debbie’s clippers humming during a buzz cut.” ~Nancy Dillingham, author of 1950: Poems and Like Headlines: New and Selected Poems

Kevin McDaniel is an Appalachian poet who clings tight to his cultural traditions the way he clings to the cross that contains his father’s ashes. Kevin holds onto memories in his poems. Discover them as you read! Discover his place, family, and acquaintances captured in his words! Catch his belief in God during a tornado! His poems are nailed on the page to endure beyond fence posts and a bluebird box he put to one. ~Rudy Thomas, author, poet, and editor at Old Seventy Creek Press.

Preparations for a Child

Clouds checkered
salmon sky like patches
on a homemade quilt.
Tina Turner belted out
What’s Love Got to Do With It?

where nurses
huddled to hedge bets—
who could tap
a dehydrated vein
illuminated by
infrared.

I tried
to deduce the color
of a leaf shimmering outside
the tinted window
when suddenly I heard
your heart harmonize rhythms
on a monitor.

Doctors read
your mother’s rap sheet
of medical procedures,
which included a C-section
that pulled you into
this world
that you didn’t
ask for.

When I hid death

in a shoebox
I broke hard
ground
with a rusty shovel

The wooden handle
planted splinters in my
hands
I dug deep

where cardboard
now gives
rest
to a furry critter that

Feeling Change Before the Fall

The sun doesn’t act
the same as in July or August
when it blisters the mower’s arms
and leaves crimson welts
behind knee caps.

Its touch is gradual
like a lukewarm massage
with fingers pressing
up and down a spinal column
before patting the nape
of the neck.

We walk
meandering trails
under blue bellies
of billowy clouds
hastily draped over maples
showing premature yellows and browns
that we pause under
to visualize reds and oranges
that will come.

We prefer
they shower their drooping tapestries
down on us
at once
instead of one by one
since we, too, can feel
the blight that falls
on them.