Two elite endurance athletes and their child survive a plane crash in the remote wilderness of northern Quebec. With no rescue expected, one of them laces up his trail shoes and sets off for help. As a medical professional and an experienced ultrarunner, Dan understands what the human body can be made to do, and he’s ready for the stages of biological breakdown he encounters, but he underestimates the landscape before him. 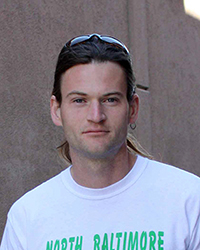 Dave Essinger’s recent work appears in Gargoyle, Mud Season Review, Midwestern Gothic, and elsewhere, and he received a Notable mention in The Best American Sports Writing 2014 for his essay “Hallucinating in Suburbia,” winner of Sport Literate’s creative nonfiction contest. He received his MFA from the School of the Art Institute of Chicago, and is a fiction reader for Slice magazine and General Editor of the AWP Intro Journals Project. He’s not fast, but has been running ultras with his wife, Alice, for ten years now, and still regularly tries to run for too long against everyone’s better judgment. He currently teaches creative writing and edits the literary magazine Slippery Elm at the University of Findlay, in Ohio.

Dave Essinger slowly scatters bits and pieces for the reader to assemble—from the start…to the moment by moment challenge of covering ground in a challenging wilderness. The book brings the reader to pauses of both ‘Wonder if I could do that’ and ‘I would not have lasted that far.’ In the end I was left wishing for another fifty or sixty pages; for now my imagination will suffice. —John Morelock, author of Run Gently Out There

After a plane crash in a remote Canadian wilderness, the athlete-hero of Dave Essinger’s riveting debut novel faces the race of his life—to save his wife, his daughter, and himself. Dan’s past is fraught with sinuous turns and compelling complexity, but his present path is straight and clear: survival. We follow his every stride, sometimes as breathless as he is, as he runs toward rescue—or disaster. —Mark Brazaitis, author of The Incurables: Stories, Truth Poker, and Julia & Rodrigo.

For his debut novel, Essinger takes his protagonist, a competitive runner, and pits him against the brutal powers of Mother Nature. The only finish line for Dan in this race is the thin, nearly invisible, strip between life and death. Just following the daunting course he takes on is a twenty-nail-biting experience. ~Carol Anshaw, author of Lucky in the Corner, Seven Moves, Aquamarine, and Carry the One.

In front, the pilot was still harnessed in, surprisingly fine hair hanging down from his head. As Dan moved toward him, the man jerked his arms spastically.

“Where are we,” Dan demanded. “How far is it to—” Then he saw the extent of it, the smashed disarray of the cockpit. The plane had skidded forward, upside down. The plastic of the windshield was crazed and fractured. Rocks and brown grasses and chunks of frozen mud spilled through the side windows. The instrument panel and the firewall behind had given like French doors against the bulk of the engine as the nose of the plane had crumpled.

The whole front of the pilot’s shirt was sticky with blood where a lichened branch, flashed up one side with new wood, protruded from his chest just beside the sternum. A thick rivulet of blood streaked upward from the man’s collar, along the jugular toward his ear.

Dan told him he was going to live, he was going to be all right. It was a lie, but he could think of nothing else to say. “There’s a, a, an emergency beacon, or something, right?”

“A search party, then,” Dan said. “They’ll come for us. We’ll get you to a hospital. You’re going to live through this.”

The pilot shook his head. “You really don’t—out here, nothing’s—” It sounded like he croaked the word, “Saffron,” and Dan thought he was delirious, already gone. Then he said it again and Dan understood: “Sat phone.” He coughed and waved weakly at his chest, tapping at what looked like a bulky regular cell phone. “Help me get.”

Gingerly but quickly, Dan reached past the man’s trembling hand into the mess of blood and withdrew the satellite phone from his vest pocket. Its plastic surface was slick with blood, and as Dan turned it over, sparkling shards of plastic fell into his hand. Green and gold circuitry was visible, and he held the phone dumbly.

After a second or more of silence, the pilot spoke first. “I’m so sorry,” he said. “Your daughter. How old?”

Blood bubbled from the pilot’s lips. So sorry, he mouthed again silently, shaking his head. Fuck you, Dan wanted to tell him, but then he understood that the man was dying, not in minutes but right now, as he watched. His anger dissolved and all he felt was relief, at being useless. The dying man’s eyes searched his, and Dan remained blank, offering neither forgiveness nor accusation. Dan sifted his emotions carefully for anything he was supposed to feel, any omitted duty that would rear up as guilt later, but he truly didn’t know this man. He was not responsible for his misfortune.

The pilot’s chest convulsed then, and a gout of blood burst from his mouth. Dan thought it had missed him at first, but on looking closer, fine red specks of the man’s last breath had delicately sprayed both of his upturned hands.