Sailing with the Pleiades 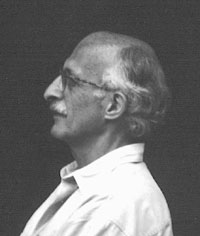 Norbert Hirschhorn is a physician specializing in the public health of women, children and communities in the USA and the Third World. In 1993 he was commended by President Bill Clinton as an “American Health Hero.”

Across a wooded trail, shrouded in oak
and maple: rusted rails, overgrown ties,
and there the remnants of a dining car –
an exquisite tooled frame hollowed out by
cycles of ice, sun, reverting to earth,
its molecules ground down by mice and moles.

Also I by angel-hand designed, wonder
now how to keep whole. Like Osiris,
I’ve shredded myself in every city.
As I vex my wife with this late-life terror,
she turns me to another crossing:

At the Palestine-Israel checkpoint:
barbed wire runs, strip searches,
a heavy rain, dark field clotted with mud,
January’s wind gnawing the cheek,
an Arab day worker, almost old, hard used,
awaiting his ride after eighteen hours
of putting bread on the table.
Every reason to be mean.
He saw my wife standing there,
small, bedraggled, going the other way.
The man gave her, gave her, his umbrella.

Pay attention. We’re all just passing through.
We leave so much, so little:
atoms, poems, that umbrella.

WHAT ARE THE ODDS OF BEING BORN?

The soul remembering its loneliness
Shudders in many cradles. –W.B. Yeats

Rain,
a long walk in the woods,
nine months of nausea,
me.

What were my odds of being born?
She ripened four hundred eggs,
her mother the same, her grandmother…
all the way back to the non-begot
when Self was not.

The philtrum is the cleft
above the upper lip.
Mother said it was God’s thumb-press — a stigma —
to make me disremember
my soul-forlorn state.

Self
perhaps like quantum weirdness —
(there) (not there) until it quickens.
Someone laughing with orgasm
at two in the morning.

Some are wheat and some are chaff,
but for all, perhaps, one other chance.
Am I that other chance —

SAILING WITH THE PLEIADES

Even as I jog the lanes of New Haven,
speeds up to three one-thousandths
a kilometer a second, saying hi there!
to the flower seller, the one-armed peddler,
the pan handler, the cop, and
caretaker Bill of the Grove Street Cemetery –

Earth twirls me on its hip, west to east,
gyrating through seasons, and Sun pilots
its argosy of planets, asteroids around
the Milky Way — two hundred fifty million years
to make one tour — while my dear little galaxy

sails on: silent, ghostly, accelerating
in free fall toward that terrible crystal:
God.
God? Who created Himself from Nothing?

But he’s running away from us,
nearly the speed of light;
ahhh let him go, trouble from the start,
or where was he when we needed him most?

And another thing:
the way a tide in Hokkaido cancels
a wave on Cape Cod,
consider that I am alone this night,
running the lanes of the graveyard,
abandoned at the speed of thought,
eyes shut tight, not moving at all.