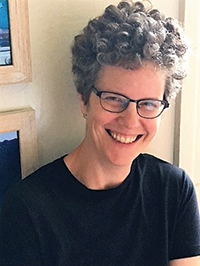 Heather McNaugher teaches literature and writing at her alma mater, Chatham University, where she is also poetry editor of The Fourth River. She is the author of System of Hideouts and two poetry chapbooks, Panic & Joy and Double Life. Her poems have most recently appeared in Oyster River Pages, Pittsburgh Poetry Review, and The Cossack Review, and her nonfiction in Fourth Genre. She’s lived in Seattle and Brooklyn and received her Ph.D. in English from The State University of New York at Binghamton. A nostalgic librarian, she once worked for the Carnegie Library of Pittsburgh, where you will find her on a weekly basis wandering among the novels.

I don’t want a brain surgeon who claims med school was a piece of cake, and I don’t want the news about life on this earth from someone who hasn’t been abraded by its grit. Thank god for Heather McNaugher, who is engaged in the ancient profession of naming all the things we can hardly stand, which includes love just as much as its various unseemly sentries. How can pain dazzle like this, just from being pinned to the page? That’s exactly what this book is up to, and McNaugher calls it like it is: “Some days are a dog/you want to put down.” Like all powerful narratives, these poems revolve around those single, still moments where the dime drops, the word you can’t say rings out, and it’s possible to look full in the face of the desperate truth. And grace is here, too, which this book so rightly observes. ~Sarah Smith

Heather McNaugher’s second full-length collection paints a portrait of growing up smart and queer and full of desire. This speaker knows “at the bottom of everything is rape.” I love the violence and vulnerability and old school vinyl in this book. Most of all, I trust this voice: lost in adolescent obsession or grad school “before the internet stole from us/material reality,” drunk or sobered up or swooning in the “tranny bathroom.” Take these wise poems as a tonic for our times. ~Julia Spicher Kasdorf, author Shale Play

What I love most about these poems is how they zoom in on the kind of longing that doesn’t waver with the passing of time. Time heals everything, except when it doesn’t: “The person I conjure behind me at sinks / is you and will go on being you, your hand every night / a lie I believe.” McNaugher juxtaposes the devastating nature of heartbreak with the sexy chaos of desire: “Would you rather / spend forever in separate rooms but be able to talk? Or / in the same room permitted only to touch?” Do you feel yourself getting hot? This collection sets my heart in my throat and holds it there. ~Lisa Summe

You Wouldn’t Do It

In spite of the bed, the creek-
bed that is, poured out for us
like a new planet, bony and staring,
water yet to be discovered.
We had yet to be discovered, small horses,
escaped. Pulling over us was
the homespun sweater of night.
Into this I followed. You,
who would not slow, turn, do it.
Who would not stop abruptly
that I might crash-land there.
We were Capricorns, and so
you would not do it but would instead
plunder the night in slow circles. Me—
following and cautioning, following
and cautioning, afraid
of the dark and afraid
of wasting it. At the mouth of the field
we were fishtailed goats, plodding
and slick from all the everything
but touching. We were women
and you would not do it
in spite of the clearing before us.

I am 16 when she catches me
at the bookcase. 16 years
my mother’s waited for this.

“This one,” she says, beside me now,
closer than we’ve been in months.
I’ve grown, every inch taller
more like my father. She points
to a dull brown jacketless hardback.
October Light. John Gardner.
“You’ll like this one. He takes a shot-gun
and shoots the television on the first page.”

Ask me where I get my sense of humor,
my uproarious inappropriate laughter
as leading men
lose their minds.
2363 Sherbrook Street
on a too-long Sunday afternoon,
the light through the blinds striping us
with dust.

Jerry doesn’t ask for my Advantage® Card, my Wellness+ card,
my Co-op Card or my Extra-Care® Card.
He won’t ask would I like to donate my bag refund to Pit-bulls,
who are just misunderstood, and did I find everything I need today.
Jerry could give a fat fuck what I need.
He might even charge me a dollar more
for all the years he’s charged me a dollar less.
At Jerry’s for 15 bucks I procure the weekend’s entertainment:
Learning to Crawl, Hounds of Love, The Affordable Floors,
Depeche Mode, Echo and the Bunnymen.
Jerry rings me up. He thinks I have faggot taste
and I do. Throughout Jerry’s the speakers belch the bus exhaust
of men, the proud sweaty arm-pit farts of men, the Hanks,
the Willies, the Johnnies, the Billies and Busters—
Jerry’s expands by a million more albums
every time I’m in there. Like fucking Bleak House,
how every time you read it there’s more. Dude’s writing
from the grave. Dickens would’ve dug Jerry’s.
They’re in there now doing lines off liner notes,
Luksusowa shots and Iron City chasers, groupies
long on make-up, short on shorts. Chuck feels up
the turntable—Tex Ritter, all gun smoke and bluster.
The neon pulses—Open—but the door tonight is locked.