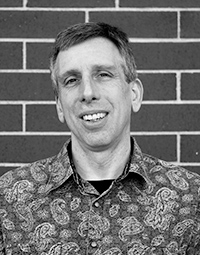 Robert Lee Kendrick grew up in Illinois and Iowa, but now calls South Carolina home. After earning his M.A. from Illinois State University and his Ph.D. from the University of South Carolina, he held a number of jobs, ranging from house painter to pizza driver to grocery store worker to line cook. He now lives in Clemson with his wife and their dog. He is the author of two previous collections, Winter Skin (Main Street Rag Publishing) and What Once Burst With Brilliance (Iris Press). His poems appear in Birmingham Poetry Review, Valparaiso Poetry Review, Atlanta Review, Tar River Poetry, Louisiana Literature, and elsewhere.

Robert Lee Kendrick’s Shape the Bent Straight mines the familiar tropes of Appalachian literature–violence, pills, dangerous relatives, the legacy of the past–to tell the story of Jacob, who is both haunted and repelled by his heritage. This novel-in-verse follows Jacob as he flees the place and the people he is familiar with to find his own way. While the story compels, Kendrick never lets his language sag. This is a world where “frost stings” and a novice cook “floats on the smell from the pot.” Whether he describes a cook chopping meat or a workshop, Kendrick’s lines ring with the hard music of authenticity. You might read this quickly for the story it tells, but you will return over and over to linger in the spell these lines cast. ~Al Maginnes, author of The Next Place and Music From Small Towns

Shape the Bent Straight is an evocative book, wherein each poem is composed of lines that are clipped and terse but “that gleam like the delicate beads / on the gutter and rails.” These lines ultimately tell a touching story, whose young protagonist must sacrifice everything–his family, his home, his sense of self–for what he believes is right, never losing the knowledge of what it means to be a brother, a son, a human being. ~David Armand

Shape the Bent Straight acknowledges the genuine brutality in the natural world and the human-made worlds that inhabit it. These connected narrative poems guide us through the lives of troubled people, but they also evoke powerful emotions of the traditional lyric. With these harrowing and beautiful poems, Kendrick achieves a unique and luminous voice. ~William Wright

Like an autopsied artery, a rent branch
lies across blacktop. Young wood brittles

in sun. Late ragweed and foxglove sweeten
November, their blooms shucked to wind.

As he sits on his truck’s front bumper,
Jacob Blanton, seventeen, sharpens a knife,

breathing in time with slow strokes on the whetstone.
Across the length of Oconee County, his brother Daniel

lies in a hospital bed, bruises on his torso and legs
turning purple, his swollen face, an eggplant —

the work of some tweaker’s aluminum bat. A weed-choked lot,
abandoned garage. Their cousin Isaac is tracking a name.

Soon, a drive over the bridge, axe handles and steel
in the night. A seat in that Jeep already waits for Jacob.

Jacob can still hear his brother’s words in middle school:
Stop being a pussy and fight, ’cause I won’t do it for you.

Sidestep when you can, back down when you have to —
what Jacob has lived by since. Blend in to the back row,

the hallway. Keep to his room when their mother’s not home,
the creek or the woods when she is. Clock in to Vaquero’s

on time, wash dishes, mop up, return to the house
where his mother may be face down on the couch

from Xanax or plastic jug whiskey, or pacing the floor
from meth. Put his head on desks at school, if he goes,

eat the free lunch by himself, take the detentions
and in-school suspensions without raising fuss —

He’ll rather wear loser than outlaw or junkie
until he can find something else that fits.

Right now, he has to take brother. His mother,
Isaac, expect him to strike wood or metal

against another man’s flesh, crush skin, crack bone,
repeat blows until the measure is taken, and then some.

Jacob remembers the time at thirteen
when he lay on dirt, his flailed punches, failed kicks,

decided he’d take. He imagines the weight
in his hand. Eyes closed to not see the blow land.

The barrel’s blunt thud. The sting in his palm. Quicksand
in his gut. In his mouth, something like smoke, and salt.

As he stares at the dry roots clutching the bank,
he knows he will not pay a share of this debt.

The seed didn’t choose its own soil,
just drove taproot down where it landed.

Pulls what it can from loose dirt,
or falls into what’s left of the water.

Afternoon shadows reach towards the creek,
marking the last hour of sunlight. Give it the choice,

it’d get off that ledge and find better ground.
The refusal will cost him his brother, his mother

his bed. He watches the trees drop first leaves.
Storing strength. Hardening up for the winter.

Always the same stash place for Daniel –
a surplus .45 cartridge box under his bed.

Under two buck knives in sheaths,
a half-dozen copies of Swank and Club:

a sandwich bag rolled with a rubber band,
filled with his stash of Xanax and oxy —

The two things he knows how to save,
Jacob thinks, his jackass idea of a bank.

Make that fucker pay, his mother snarled
through a veil of black tangles and cigarette

smoke  this morning, before she walked
to her boyfriend Tom’s truck, unsteady,

as if the soil slid like floodwater. Pills and no sleep.
Get more hours from Vasquez, she mumbled. Hospital bills.

Jacob knows she will not look for work.
Not with her baby –  her Daniel – hurt.

Jacob will ask for more shifts, ask Mr. Vasquez
to add the new money, to what he has held the last year.

A half-ass excuse for a bank, Jacob knows:
each check signed over to Vasquez for cash,

some set away for a deposit, first month’s rent,
maybe Tri-County Tech. No stubs or statements

for his mother or Tom or Daniel to see.
Five hundred or more in this bag. Isaac

can hit what the hospital gives him. Sell
if he’s smart. Or share with mother and Tom,

most likely. Their choice. Jacob has heard
there’s a man near Pine Mountain who’ll buy

what you’ve got, his arms covered with dragons.
This afternoon, Daniel’s room at Oconee.

This evening, work. This night, across the state
line to Pine Mountain. Warnings of early snow.

Jacob turns the bag in his hand. Cartridge
box still open. He shoves the pills in his field coat.

Box closed. Back under the bed. He will open
it one more time, to replace what he stole.

He won’t stay in this room he shares with his brother,
doesn’t know how he’ll sleep tonight, or the next,

or the numbered nights after Daniel unlatches
the box. But the money. Everyone set.

He locks the front door behind him. He will turn
the knob in the morning dark, walk lightly,

unlatch the box without sound, without light,
tuck the cash under the boob mags, lie on his bed

seven feet from the theft, look into black over his head,
wait for the day’s shouting, his mother’s curse,

Back bent, head down, he opens the truck
that’s still in his mother’s name, that tonight he’ll drive

over curved gravel roads, though snow, to a screen door
opened by dragons, to the birthright bought and sold.

Boone’s Creek slides over rocks,
gravity-locked on its mark. Obeys

the path of least resistance,
runs straight when it can,

bends when it has to, until it finds
a thin patch of rushes, dumps itself

in the Seneca River. If I squeezed
the moon like a trigger, Jacob thinks,

the sky would smother its own empty click.
Purple hooks under his eyes, nose crooked

like the creek. The water’s cold riffle.
A rat carcass drying on rock. Picked clean

at night, wind lifting hide from the bones.

A dish rack. A sleeping bag. A surplus wool
blanket so he won’t have to sit on the floor.

A lamp. Braxton furrows his freckles,
shook his head. Good luck getting girls over.

Jacob laughs. I’ve never seen any panties
’round here. Ain’t going to have time for that

They sit on Braxton’s couch, tap their ashes
in soda cans. Culinary? You can’t cook toast.

And, you’re going to burn out. Jacob has worked
out the timing. Tech during the day. Nap. Vaquero’s.

Nap. Stop a Minit. Nap. Maybe five hours
of sleep. Then the weekend. Get his head right,

just a thing to be done. I got this, Jacob says.
I’m gonna cook – and not fucking crystal.

A trailer just outside Seneca. Some friend
of Braxton’s father, willing to take

a few hundred rent – less than market,
but Mr. Ross promised him Jacob was good.

Tomorrow, Jacob will take his one box,
the lamp, unlock the door to his single-wide.

You sure you’ll hike Diesel
until you can put up a pen?

He can’t look at the dog when he says this.
Yeah, Braxton says. I’ll let him run squirrels.

Get his head right. Stop a Minit at midnight.
Braxton will be out to raise hell with others

from work, then sleep in the New Year.
Jacob will clock out at seven. Move the box.

An extra Stop a Minit from noon
until five. Sleep. Back at midnight.

The first El Torros and M-95s
boom in the dark. Roman candles howl,