Side Effects of Wanting / Mary Salisbury

Side Effects of Wanting 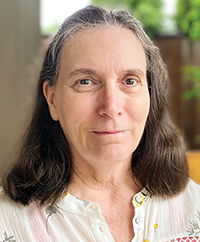 Mary Salisbury’s short fiction has been published in Cutthroat’s Truth to Power, The Whitefish Review, Cutthroat: A Journal of the Arts, and Flash Fiction Magazine. Salisbury’s essay on writing was featured in Fiction Southeast. Two of Salisbury’s chapbooks, Come What May, and Scarlet Rain Boots, were published by Finishing Line Press, and her poetry has appeared in Calyx. Salisbury is an Oregon Literary Arts Fellowship recipient and a graduate of Pacific University’s MFA in writing program.

Side Effects, Mary Salisbury’s impressive debut collection, introduces a writer whose voice compels and enchants, its quiet and subtle vibrancy pitch perfect, story after story, and intensified by the quietness that surrounds each. Stories of love, longing, and loss, and behind each the writer’s charitable heart, and an observing eye that misses nothing. ~Jack Driscoll, author of The Goat Fish and the Lover’s Knot

Compelling and remarkably honest, Side Effects of Wanting investigates the sharper edges of our unique emotional landscapes in a series of exciting, accessible stories that explore both the strengths and frailties of the human condition in its varied aspects—personal identity, grief, fractured relationships, the ghosts of the past, transformation, and slowly mending hearts. Weaving together small-town stories filled with secrets, hardships, and that ever-present ache of almost becoming the person you want to be, Mary Salisbury tenderly renders heartbreaking narratives in which characters reach out to be loved, to be understood, and to finally feel safe. ~John Sibley Williams, author of As One Fire Consumes Another

Mary Salisbury’s stories are infused with the precision of a poet and the wisdom of a deep thinker, amounting to some of the best stories I’ve read about milestone matters of the heart, everyday regrets with life-altering outcomes, and the painful nuances of long-haul love. Side Effects of Wanting not only invites us in, it lets us laugh and cry while we watch on the edge of our seats as lovers, siblings, parents, and co-workers face private, universally relatable conundrums head-on. ~Katey Schultz, author of Still Come Home

Sheryl was glad to get to the lunchroom before the kids did. She checked to see whether the fruit bar was stocked with grapes and oranges and apple slices. Two women wearing aprons and hairnets guarded the Plexiglas awning covering the steaming food, ready with spatulas and tongs. Today was Pizza Wednesday and for those who didn’t want pizza, a stack of turkey sandwiches stood waiting in saran wrap.

The room began to fill with a line of kindergartners, followed by first through third grade. Their voices chirped from table to table despite the school’s rule for restraint; nothing could stem this rush, every moment coming quick, something new up ahead.

If you had the yearning, and Sheryl did, you could feed off their unbridled joy, walk in close and let the rays warm you. Don had told her last night he’d lost another bid. This being the third job lost in the last six months. He did interior finish work, and what few houses were still being built, had hundreds scrambling for the bid. She’d already asked for more hours first thing this morning, but there were no extra hours to be had.

Sheryl made sixty dollars a day, five days a week. Maybe she could put up a sign at the local library and advertise childcare on weekends. All she’d ever known was taking care of children, first her own, then those of others. Almost thirty years of children now.

Hers and Don’s had gone to college, and all three had the long-term prospect of good jobs; they wouldn’t be making ten dollars an hour. Wasn’t that the whole point? Make life better for your children?

“Teacher, can I go?” Sheryl turned, to hands raised and little bodies wriggling, plates either empty, or food spread in clumps to make them seem so. “You can go,” she said, setting free child after child. Off they flew to the playground.

She wiped the tables down before beginning her playground duty. Outside, she walked the length of the green field, scanning the cluster of boys playing football and the clutch of girls gathered along the edge engaged in dance routines. Rick’s sixth grade class was already out, meaning she’d missed him.

A dense early morning fog had burned off to a soft blue haze. The old brick storage shed at the end of the field emerged, lit by the sun. Though it was only the first week of February, she could tell there’d be an early trembling toward spring, and the children seemed to sense it too, their jumps light and high as kangaroos.

“Teacher, watch us,” the girls cried. Sheryl long ago learned that to all children adults working for the school were teachers. She didn’t correct them, didn’t say, I’m just a playground monitor.

She gazed across the field and noticed a pack of boys chasing three girls. They pursued the girls at great speed, the girls squealing, wisps of blond and brown hair flying, until they retreated into the bathroom. Sheryl followed and called for them to come out. Last week a sixth grader was caught smoking in there.

When she had her own children she’d been fortunate enough to stay home with them, working weekends shelving books in the library, bringing armfuls of picture books home to read aloud. Those days made these days bearable: The memory of security and love.

Now she and Don were barely keeping their heads above water, and the grim awareness of debt was like a feral cat lurking nearby. They had to do something. But what? Sheryl had checked this morning before leaving for work: $32.23 in the bank. The numbers, how they formed a reversed pattern, seemed significant. She clung to hope, clutching invisible strings of chance.

Don had lost work before, but it felt different this time. People were even losing houses. He’d just turned sixty. She’d warned him years ago about losing the safety of company work, and how they had fought over his determination to do sub-contracting. A tax consultant had issued warnings about quarterly taxes and getting behind. No such thing as unemployment checks for the self-employed.
No point remembering what was.

The group of sixth-grade boys—Rick’s boys—playing football, waved her over. One on the ground pointed to another saying, “Teacher, he pushed me.” Turned out the one on the ground, Joey, had called the other boy, Carl, the “B” word. Bastard? Bitch?

“Come with me boys,” she said, and they did. She was pleased when the children did what she asked. Every now and then there’d be a scuffle, but the threat of sending them to the office ensured their compliance. She led them to the center of the field and said, “There’s no swearing or name calling. Understood? Play fair. If you play fair it all works out.”

Was that really true? Hadn’t she and Don played fair? Made a family, purchased a house, paid their bills, worked hard and saved. Now the whole country was looking for work, a hundred people scrambling for the same job, no fairness about it.

The sun burst through the last grip of fog and warmed the back of Sheryl’s neck. She’d started to wear her hair up in a loose bun. The children had flung their coats and sweaters off and they lay in colorful heaps, glittering on swings and on the gravel under the climbing structures. When the bell clanged, Sheryl called, “Get your coats,” to the throngs of children running to form classroom lines. Later in the day she’d gather any leftovers, dropping them in tubs bound for the office.
She joined the children as their teachers came to collect them. An older man filling in as a substitute teacher, Rick, was among them, and Sheryl pushed ahead of the children to tell him about the scuffle between Joey and Carl.

Last Monday, the day they first met, Rick had lingered on the grassy field. The first robins had swooped in, their orange breasts like lanterns in the fog, trumpeting their fleshy foretelling of spring. Just then, the sun broke through, laying silver streaks on the grass as the robins rooted around. She and Rick took in the scene and Sheryl said how much she appreciated birds, especially robins, and he nodded his understanding.

He had a way with children—a quiet forcefulness—they liked him and wanted to please him, she could see that at once.

And she felt it too, like the thawing of the icy fog, spreading warmth through her. Could this be hopefulness? Instead of shame—though there was plenty of that—she had felt a sudden quickening, as if a small bird inside her was yet to take flight.

Now he listened with concern as she relayed the scene with Joey and Carl. “Did you send them to the office?”

“I’ll come out next recess and check on them. Thank you Sheryl.”

Her shift ended in an hour, and she usually alternated between helping in the kindergarten class and sorting through teacher requests in the workroom. Sheryl and two other playground monitors went into the workroom to begin to process teacher orders for cut outs or copies. The women often talked about their families, but today, Sheryl contributed little, not wanting to reveal the misfortune of Don losing work again. Down here, at ground level, everyone was living close to the bone and sometimes it was better to seek sympathy elsewhere, if at all. As she made copies, Sheryl decided she’d stop by the library after work and ask if they needed help on weekends. No harm in asking.

If you’ve enjoyed this part of the story, “Ground Level,” and would like to read how it ends along with other stories included in SIDE EFFECTS OF WANTING, order your copy today.