Runner up in the 2014 MSR Poetry Book Award 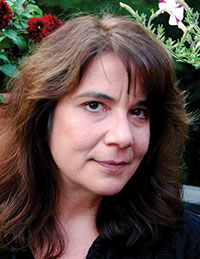 won the 1997 Slipstream Poetry Chapbook Prize for Gravel, the 2001 Word Press Poetry Prize for her full-length collection Rare Space and the 1997 Chicago Literary Awards Her second book, Liquid Like This, was published by Word Press in 2008. Leslie’s poems appear in Dogwood, Jubilat, PANK, Pearl, Poetry Magazine, New Ohio Review and more. She is managing editor of HEArt — Human Equity through Art — and works as a copywriter in Pittsburgh where she lives with her daughter Silas. More at lamcilroy.org.

In SLAG, Leslie Anne Mcilroy is operating on all cylinders. She packs her lines with hard syncopation—sharp, clear physical sensations stacked one on top of the other to create a tough, honest, often unforgiving landscape, a landscape dominated by the body, the human body. SLAG immerses us in the physical world—frank, sometimes brutal—dealing with both damage and survival, where pleasure and pain struggle against each other. These poems remind me of sexy, sassy blues songs amped with defiance and strength. They linger long after the last note. — Jim Daniels, author of Birthmarks, winner of the 2014 Binghamton University Milt Kessler Poetry Book Award

SLAG is a book that dares you to be as honest in reading the poems as the author was in writing them. Nothing timid here — no retreat and no stingy reticence. Both scalding and beautifully considered, these poems move like something in pursuit, running after us. We all know how tempting it is to ignore those cracks in the foundation that refuse to be fixed, but we do so at the risk of falling through and living beneath ourselves. Mcilroy ignores nothing; living beneath, not an option. If life is sometimes hot grease in the face, SLAG holds the poems that still see everything and don’t flinch. — Tim Seibles, author of Fast Animal, National Book Award Finalist

Leslie Anne Mcilroy’s remarkable book is as tough and finely wrought as iron. SLAG is the hard-edged beauty of pool halls, strip clubs and rust, dive bars and miner’s dust. Desire looms large in these poems—these bodies on fire—laced with blood, spit and scars. They meet the most difficult subjects head-on and refuse to flinch: rape, abuse, illness, violence, near-death. But most of all, SLAG is a fiercely dazzling song of survival and strength — “a blessing on your lips you wipe away with a fist.” — Erika Meitner, author of Ideal Cities, winner of the 2009 National Poetry Series Competition

One blue hour simmers on the stove, steam rising
like a slow train up and over the mill line —
still-life burnt in coal, black heat, skin cold-split
in the third shift. The radiator hisses.

Flurries dance on the wind in spun madness. She
presses her hands to the hot pipes, looks out across
the Pittsburgh grey, soaking it in, spreading it like a blanket
across her memory — thick like miner’s dust, an iron door.

She wears gloves to bed, wakes to the itch of wool,
startled by how her fingers feel like someone else’s,
how rough they’ve grown — like a man’s — inside
her winter skin. She pictures the man, bright within

her childhood dream-head like the light at the end
of a shaft. He is twice her size and she can’t see
around him. Warm bourbon breath that melts the snow
before it lands. The game will be in the big wooden house,

the kitchen floor freshly mopped though no one lives there.
She will like the game because he made it up just for her.
She puts her hands in his flannel pockets and follows.
The sky is wide, the day endless. Somewhere a kettle whistles.

The man’s fingers are dry and hot as he teaches her
how to play. When he kisses her, she kisses back.
It is freezing without her gloves and underwear, but his hands
are a furnace and that is enough. He doesn’t ask her

not to tell. Instead, he points to the smokestacks
across the river still burning, says how the blue fire
from the molten ore can singe your skin off, leave you
cold like steel. Tells her she’ll never feel anything like it.

Don’t trust the hand on the heart,
the heart, a fickle wind, the fist
thumping too hard on the chest,
heart pumping too hard inside
with what’s been/not been done —
the foolish, unfair, the heartbreak
and bad luck. The fingers flinching
as they fall to the thin & empty pocket.

Trust the eyes, mostly, the travel
to another city/another/to see
something outside the self.
The lights from the barroom
draw a simple map to follow,
but you can’t fit this in a shot
glass and no matter how many
times the door swings open,
it will be another regular
like you in the wrong town.
Trust me on this. Smoke.

We are lonely for a friend
calling from a sea city,
for a day when love isn’t
something we don’t have
enough of, like money or time.
We are black winds that once
took the night someplace sexy
but now just stir themselves
darker still and settle. We are
lonely and the only thing
that will save us is a poem.

But the poem, it has to have heart,
because if it’s just the gesture
or the memory of that looker
in Detroit, if it’s just a free drink,
or kisses like candy, a badass night
when you meet yourself in Erie
and you’re still cool, if it doesn’t say
anything about your eyes looking back
in the men’s room mirror that know
nothing of this greasy, smoky din —
a fire small, yet hot and grace —
if it doesn’t know that you can’t
beat the stars down with a stick,
then, it’s not a poem, it’s just
the promise of one.

It Was All a Dream

We begin the journey
back, all hot air, inflated
with hope, weighted
with want, the leaving,
the return still circling
with its yellow brick
desire, its just
around the bend.

I give you my heart
to carry, you give me
courage to walk away.
We are both smart
enough not to get hit
by the house. But what
of poppies, of slippers
of sorcery? They’ve been
slept in, worn, and died
for — the wand,
how it sparkles.

How else might we
find our way, know
our rainbow sorrow?
Me with my dog,
you and your stormy
mended fence,
a tornado of
want, want, want,
no place to land,
just straw and metal
and no place like.

Nobody is scared
of the monkeys
or even fire.
We have already
melted and to come
back from that
is a kind of wizardry,
a kind of pulling
the curtain down.