Something is Bound to Break / Peter Neil Carroll

Something is Bound to Break 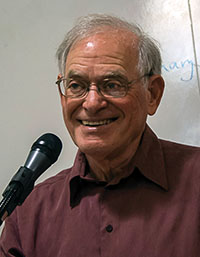 Peter Neil Carroll has published over twenty books, including five previous collections of poetry: An Elegy for Lovers (Main Street Rag, 2017); The Truth Lies on Earth; Fracking Dakota: Poems for a Wounded Land; A Child Turns Back to Wave: Poetry of Lost Places which won the Prize Americana; and Riverborne: A Mississippi Requiem. His poetry has appeared in many journals and online. He is also author of the memoir, Keeping Time: Memory, Nostalgia & the Art of History. He is currently Poetry Moderator for Portside.org and lives in Northern California with writer/photographer Jeannette Ferrary.

There is no subject too large for Peter Carroll, a strong and unusual poet who writes with intelligence, with certainty, with wisdom, and with a strong and compelling voice. The poems in this collection are worth reading again and again. ~Esther Cohen, Breakfast with Allen Ginsberg

Poetry is hard. Consider the world we live in, consider these magnificent poems by Peter Neil Carroll. I admire his courage to tackle the intimate and the distant. I admire the way his poems hunger after words without being self-indulgent or over-the-top. His language is vivid and specific and sensory and intelligent. These are poems of beautiful precision, deep seeing and knowing, rhythm and music and song and singing. ~Joseph Zaccardi

Something’s Bound to Break, Peter Carroll’s most personal book to date, offers us a writer at the peak of his powers. In episodes from a long, eventful life he portrays the human condition in all its grandeur and folly. Childhood, romance, the phantasmagoric maze of New York City, everything that touches him becomes an opportunity for wisdom. Something’s Bound to Break will leave you laughing, enlightened and asking for more. ~Lee Rossi

When the customs officer at Newark
pulled me aside to ask what I do, I told him
I’m a poet. You write jingles? he replied.

Luckily, I live with a sensible woman who
has a real job at a Silicon Valley company
producing high-tech heat-shrinkable plastics.

Already the big shots are working out whom
to bed when the party runs dry, before they
retreat to their wives raising virtual children.

Unsure of my welcome, I keep to the edges, mind
my business, which is to say take mental notes
for a poem I will write someday on male privilege

until one of the suits notices me standing alone,
approaches with a handshake. Quickly I explain
my ticket of admission and he scans the room

to find the woman I live with. She’s from Brooklyn,
he tells me, as if I didn’t know, which is his own
home town and goes on to relate his rags-to-riches

spiel. He is affable. I take a chance and ask what
he does. He smiles, he winks, enjoying the question,
concedes he’s CEO of this Fortune 500 business.

What about you, he gets around to asking, amused
as if he knows the answer. A poet I admit. His eyes
narrow, measuring carefully. That’s what’s great

about America, he says, invoking his wisdom, you
can be anything you want—an opera singer, an artist,
a poet—as long as you don’t expect to be paid for it.

Maybe because my father fixed
pocket watches and antique clocks
I never carry a timepiece.
The one watch I cherish
belonged to my mother’s father,
a gold stemwinder attached
to a chain that he held close
to my face, springing open the lid
to bump my nose.
That watch has ancestral history
not for its age or rarity
but how my grandpa used it
for so much more than telling
the time. A glazier in New York
who earned $5 a week for six days
of labor, he had no means to pay
the fare to bring his wife (my grandma)
from Minsk. Obviously he could not
afford a gold watch. But he bought this one
on the installment plan for 50 cents down
and quickly pawned the watch for $50
to cover grandma’s passage. Afterwards
he kept up the payments and managed
to redeem the pawn. Whereupon grandma
announced she wanted to return to Minsk
unless he brought her parents to America,
prompting him to refinance the watch.
But for that delicate object, the only thing
of value he ever owned besides his tools,
he would have been another lonely immigrant
in a lonely city
and I would be nothing at all.

Shouldering window glass, an unlit
cigarette in his lips,
a youth enters a side street,
Minsk, 1904.

The aproned shop girl Mata
watches him pass. He doesn’t know
yet but in time he’ll marry her
and in more time
become my grandpa.

Minsk, another stop on his road.
The itinerant glazier stays, he says,
for Mata’s cooking and the revolution.
But when he’s nearly killed
at a protest meeting, he leaves
immediately for the promised land.

Poor then and ever after,
stealing ship’s food, he arrives
in New York, marvels at insatiable skyscrapers,
their greed for glass. His trade lives
in his hands, his skin split from splinters,
bones shattered by faulty ladders.

What he found in America he told
ever after, his recurring dream—awakening
inside a vault filled with pennies—stuffing
his pockets—entering another room piled
with nickels—leaving behind pennies,
taking nickels, then with dimes in the next room,
reaching quarters, dumping again, re-filling—
then, he says, I woke up with empty pockets.