The Advance Sale Discount price for this title has expired. Those who prefer to pay by check, the price is $22/book (which includes shipping and sales tax) and should be sent to: Main Street Rag, PO BOX 690100, Charlotte, NC 28227-7001. 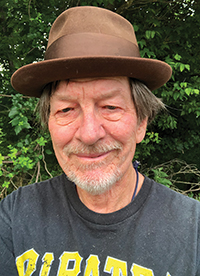 Rick Campbell is a poet and essayist living on Alligator Point, Florida. His most recent collection of poems is Provenance (Blue Horse Press.) He’s published six other poetry books: Gunshot, Peacock, Dog; The History of Steel; Dixmont; Setting the World in Order; The Traveler’s Companion, and A Day’s Work. His poems and essays have appeared many journals and anthologies, including The Georgia Review, Fourth River, Kestrel, Alabama Literary Review, and Prairie Schooner. He’s won a Pushcart Prize and a NEA Fellowship in Poetry. He teaches in the Sierra Nevada University MFA Program

Famously, baseball is a game that proceeds without a clock. The essays in Rick Campbell’s circadian cyclic, Sometimes the Light, extemporize on all kinds of time and times (including baseball’s), concretizing Time as the hidden component of Place. Baseball, too, is a pastoral game where the ball doesn’t do the scoring. Campbell’s vision is vastly peripheral while minutely focused. These illuminating and illuminated essays range far-afield but always land with that keen eye on ball. ~Michael Martone, Author of The Complete Writings of Art Smith, The Bird Boy of Fort Wayne, Edited by Michael Martone, and The Moon Over Wapakoneta

Rick Campbell’s memoir, Sometimes the Light, unpacks the journey of a lifetime through a series of meditative essays, with each revealing a fascinating interior life while casting a measured eye on the world around him. It’s a patient book, written with a deft touch, one that refuses to glance away from the difficult and messy human lives we lead, the bruised and broken and beautiful world we live in. And as much as this book is rooted in a deep contemplation of landscape and place (as we travel with Campbell through the pages of Sometimes the Light—to Pennsylvania and Florida and beyond), we’ll find that these meditations guide us into the interior landscapes of our own lives, where the past is alive, and bright, and waiting for us to see it once more. ~Brian Turner

My People, My People: Riding the Rails in Coach

Everybody loves the sound of a train in the distance

Chicago, Union Station
I rolled my cheap thrift store luggage into the overcrowded and intentionally ugly waiting area for the Capitol Limited, east bound, Chicago to DC. I wondered what was limited about the route—service, style, class, chairs in the boarding area? The lack of empty chairs, and the prospect of sitting next to anyone I saw there, made leaning against a pillar seem a good option. In 20 or 30 minutes the train should board, but there were no Amtrak personnel around to answer questions or check tickets. There was no line in front of the gate. At least a hundred people were milling around, ready, I guessed, to rush to the door when the call to board was made.

The gates were not really gates but portals, sort of openings in the wide wall. A woman’s voice was screaming last call for a train at another gate over a very bad PA system. She called last call five times, and still, some 30 minutes later people were still rushing through the hole in the wall.

I heard a loud thump on the other side of my pillar and when I looked around to see what happened a man was lying on the floor. He had fallen off the bench as he slept. He sat up, confused, way drunk, and seemed surprised to find himself on the floor, and maybe surprised too that he was in the train station. It was clear that he was not going to ride any trains tonight.

While he was on the floor, people’s reactions were many and varied. Some laughed, some just said “oh.” When he tried to stand and wobbled around, some said “a drunk” and turned back to what they were doing—which was mostly just waiting for a train. The man’s stuff was scattered around him, hat on one side, his paper sacks and plastic bags on both sides of him. A woman tried to help him up, but it was so hard for him to rise and gather his stuff that she had to give up. Eventually, the man stood, walked three steps and fell again. This second fall earned him more laughter but no help. I had been riding trains for 12 days, and I had lost any interest or sympathy for train people. I went back to leaning on my column and kept it between me and almost everyone else. Drunks fall a lot. We all assumed he was drunk and chances were very good that he was, but if he was a disheveled man with a serious medical condition that affected his balance, would we have afforded him more sympathy and help?

He shuffled past my pillar, and it seemed that he was leaving the gate area, but about 10 minutes later there was another thump as he fell again. He was closer to me now, maybe as punishment for my elitism. He rose again—it was like a prize fight with a very crappy prize. The ref should have stopped it after the third time he fell; it was clear he was in no condition to go on, but there was no ref, no one in his corner either. Why was he here? If he was homeless then Union Station was certainly a warmer place to crash than Chicago’s streets, but why at the gate? No chairs, nowhere to spread out. There were probably fewer cops around here; the almost absent Amtrak personnel seemed to be in charge of the gate’s crowd. He fell again and this one was bad. He hit his head on one of the poles that hold the ropes that the lines of people snake through. He was bleeding around his mouth. Stay down, I thought. Stay down, there’s no sense going on with this. Someone will surely stop the fight now that there’s blood. The security guy came over to him. Where had he been the first three times the drunk man fell? Security spoke into his secret agent lapel mike and then said to the drunk, “how you doin’ buddy.” Which is security speak for we are going to get your sorry, drunk ass self out of here. The man could not or would not answer. Maybe he did not know how he was doing. Honestly, sadly, I just wanted him out of here too.

I was waiting for a train.

To read the rest of this and other essays in Sometimes the Light, order your copy today and have it delivered to your house when it is released in February/March 2022