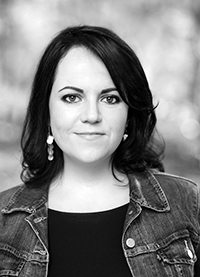 Meagan Lucas’ recent work appears in: The Same, The New Southern Fugitives, and Still: The Journal. She won the 2017 Scythe Prize for fiction. Meagan teaches composition at Asheville-Buncombe Technical Community College, and is the Fiction Editor at Barren Magazine. Born and raised in Northern Ontario, Canada, she now lives in the mountains of North Carolina with her husband and their two small children.

Meagan Lucas is a brave new voice in Southern fiction. Songbirds & Stray Dogs packs a double shot of grit and heart, with a story stretching from the beaches of the Carolina Lowcountry to the Land of the Sky and a heroine who doesn’t know the word quit. An unflinching portrait of motherhood, trauma, and the family we make along the way. ~Taylor Brown, author of Gods of Howl Mountain

Meagan Lucas has woven a lush and heartwarming story of well-meaning people trying to find their way in a world that can seem fractured beyond repair. Thrust into difficult circumstances beyond their control, Jolene, Chuck, and Cash wrestle with how to escape the past and forge a path forward. From devastating setbacks to the uplifting conclusion, every moment of their memorable journey brings us closer to these characters’ true selves. ~Heather Bell Adams, author of Maranatha Road

A wonderful story of the strength of the human spirit. As a reader, I repeatedly asked myself, “Could I ever muster the courage Jolene displayed time and time again? Would I just give up?” Ms. Lucas’s book will touch your heart and soul. It will inspire you to look at every day’s life challenges a little bit differently. ~Rodney Page, author of Macon – The Novel, The Indomitable Ms. Smythe, The Fourth Partner, Murcheson County, and Powers Not Delegated

Jolene stared out the passenger window, her hands fisted next to the spread of her thighs, holding apologies in her mouth. The car rocked violently, up then down, hard. Her head hit the head rest and the tender flesh of her lower lip crunched between her crooked teeth. Warm fluid filled her mouth, pooling hot and rusty under her tongue. She needed to spit. She longed to pull out her lip and survey the damage, but there wasn’t time. Aunt Rachel was in a hurry, racing over the potholed downtown streets. She was going to be late for her prayer meeting. She was doing Jolene a favor by dropping her off. Years of favors had worn Rachel’s patience thin. Jolene imagined each one a straw in a pile. She didn’t know which one would be the end, so she rationed herself, asking for Rachel’s help only when there was no other way. Jolene couldn’t handle the roll of her aunt’s eyes or the accompanying sigh, the inconvenience of Jolene’s pain.

If she kept her lips pressed tightly together, she could wait until her aunt stopped the car to spit out the blood. It was simple, she just needed to keep her mouth closed. Jolene could hear her aunt’s gasps and moans as the bottom of her old beater scraped the uneven pavement. Rachel hadn’t noticed Jolene’s squeak of pain, nor her silence. The silence wasn’t new.

“Y’all are going to a movie? Are these nice girls you’re meeting? Do I know them? Church girls, right?”

Jolene looked at her aunt to see if these were questions she had to answer. She found Rachel’s brown eyes on her, so she nodded. That seemed to be enough. Rachel turned back to the road, but not before another pothole rocked the car. Jolene’s mouth throbbed. Her lip felt swollen, hot. She ran her tongue against the broken meat and couldn’t help but think about the fragility of skin, of bones and blood. You could break your body with something that grew inside you. You could self destruct. The only thing to stop you was pain. Sometimes she thought pain wouldn’t be enough.

Rachel pulled into the parking lot of the dollar theater and yanked the parking brake. The regular brake wasn’t enough anymore to ensure that the car wouldn’t roll. The ratchet sound was Jolene’s signal to move. Jumping out, she smiled with her mouth closed, as usual, and waved at her aunt before moving quickly away from the vehicle. She was being rude and she would hear about it. After making Rachel late for church, she could at least have had the decency to say good-bye properly. Her jaw ached with the tension of clenching. A headache snuck in behind her ears. Palms sweating, she headed for the theater door.

“Jolene!” Rachel called from the car.

Jolene’s heart beat hard and fast in her chest. She was caught. Her stomach rolled as she swallowed the mouthful of blood and licked her dry lips in preparation. She turned back to Rachel and waited for the question, nausea welling in her gut.

“Remember who you belong to!” Rachel called. Then drove away, arm waving out the window. Jolene sighed, Rachel wasn’t even looking at her.

Her aunt meant Jesus. That’s who Jolene belonged to. It seemed be one of those loose ownerships, Jolene thought, spitting out the contents of her mouth. Like a co-op, or a condo association; part-time ownership anyway, the kind where no one really takes responsibility for any of the problems or upkeep. There was blood, bright red and spots of pink foam, on the pavement.

She’d told Rachel she was meeting girlfriends, but that had been a lie. She just needed Rachel to think she had friends. Nice friends: girls who went to church with their parents on Sunday, and volunteered with children or old people. Jolene couldn’t break her aunt’s heart by telling her that girls like that didn’t want to be friends with the orphan dropped on her spinster aunt’s doorstep. The doorstep of a tiny cottage that the aunt cleaned houses to pay for. It didn’t help that the girl was plain, her absent mother a junkie, the aunt fat, and that none of them had ever owned anything even vaguely trendy. Jolene had heard some of those supposedly nice girls talking once, in middle school, through the stall in the bathroom when they didn’t know she was there. They’d laughed about how wide her ass looked in the gypsy skirts that her aunt had found in the attic and given her. Jolene had thought she looked cool, retro, and maybe a little bohemian. She was wrong.

Jolene longed to tell Rachel that going to church didn’t make someone less likely to notice that she’d never been to a dentist, her shoes were a little boy’s size, or comment on the fact that her lunches were always leftovers from Rachel’s gig cleaning restaurants. “No one else gets fried chicken from Bitty’s for lunch every other day,” Rachel would say. “You should feel special. People come from all over South Carolina for that cornbread.”

High school was a couple years behind her, but even now, alone, Jolene’s cheeks were hot with shame. She’d emerged from school with no one she’d call a friend. She’d hidden her embarrassment over not being invited to a single graduation party by working as much as possible. She was too busy to have friends, she told Aunt Rachel, knowing that her aunt understood the desire to work and respected Jolene’s rigor. Jolene knew that was one thing that made her aunt proud. It might be the only thing. Lately though Rachel had been obsessed with Jolene’s lack of social life imploring her to make more friends than “that old colored lady, and that no good boy.”

Jolene could feel her pulse in her lip. The last thing she wanted was more attention drawn to her mouth. She sat on the steps of the theater and waited for David. She watched the couples arriving for their dates and smiled. The stream of people headed into the theater waned and Jolene wondered what time it was. She tried to remember what time he’d said to meet. She didn’t want to miss the previews. The trailers were tiny snippets of hope, slivers of promised excitement to come. She pressed her fingers to her lip; it was hot and puffy. She wondered if he would be able to tell. She pulled her lip smacker from her purse and tenderly slicked her mouth. She pushed her hair behind her ears and then pulled it back out again. Her knees bounced. She was about to go inside and ask to use their phone when David’s truck roared into the parking lot. She watched him crank closed the window as she ran across the pavement.

She met him just as he exited the truck. “Hi,” she bubbled as she threw her arms around his neck.

Jolene’s skin hummed when he called her that. David was the most beautiful person she’d ever seen, and the idea that he was attracted to her still made her dizzy with disbelief. “We’d better be quick or we’ll miss Return of the Jedi!”

“I changed my mind. Brought us a picnic, for the beach.” He pulled a bucket of chicken and a six pack out of the back of the truck and winked. The deep dimple in his left cheek riveted her. “Grab that blanket, wouldja?”

They crossed the street and headed out the beachwalk to the dunes. She watched the muscles of his back move beneath his t-shirt, the setting sun reflecting copper in his curls. David led her to a secluded spot beside some sea oats and Jolene spread the blanket. She’d never been on a romantic picnic before. He handed her a beer. The sky was turning lavender, and lines of purple and tangerine decorated the horizon and reflected in the calm water. Jolene could see movement just beyond the waves. She watched to see if the dolphins would break the surface.

“What’s so interesting out there?” He crushed his empty and threw it in the dune grass.

He landed next to her heavily. She heard the tinkling of sand hitting the top of her beer.

“Dolphins ain’t that interesting. People think they’re smart, but they ain’t. We have to pull them out of our nets all the time. They look fucking disgusting, all tore up and shit. Not smart enough to avoid a shrimp net means they’re not that fucking smart.”

“Like what? About bloody dolphins with their flippers ripped off?” His mouth was on her neck but the image of ravaged dolphins made her skin crawl.

“I know you don’t like that stuff. But you’re dating a fulltime sailor now, you’re going to have to get used to it.”

Jolene pushed him away just enough to look into his face. “I am? You got the job?”

“You’re looking at the newest, and handsomest, deckhand on the Bevy Sue. Congratulate me, gorgeous.”

“Oh! This is a celebration picnic then,” she said, climbing into his lap and melting into his chest. “I have good news, too!” she said, waiting for him to ask her to explain, but instead his hands slid beneath her dress and his mouth found the spot beneath her ear that made her knees rubbery. She pulled away and raised her eyebrows.

“It’s okay,” he said, not for the first time, pushing her down onto the blanket.

If you want to read the rest of the story, but the book!