The Advance Sale Discount price for this title has expired. For those who prefer to pay by check the price is $22/book (which includes shipping + tax) and should be sent to: Main Street Rag, PO BOX 690100, Charlotte, NC 28227-7001. 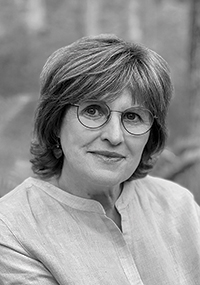 Patti Meredith’s stories have appeared in Appalachian Heritage, Still: The Journal, and Mulberry Fork Review. She holds an MFA in Creative Writing from the University of Memphis, and has also studied at Hindman Settlement School, Table Rock Writers Conference, and the Mountain Heritage Literary Festival. She tries to never miss a Darnell Arnoult writing workshop and is a member of Kitchen Table Writers. Patti grew up in Galax, Virginia. After graduating from Virginia Tech, she worked in production and marketing for commercial and public television. She refined her talents as a trailing spouse in North Carolina, South Carolina, Alabama, Tennessee, and Louisiana. Patti, her husband, Lee, and their springer spaniel, Maggie, have now settled in Chapel Hill.

An astute and stunning novel. I am fascinated by the mix of comedy and sorrow, delivered by a keenly observant writer. Fern’s sweeping emotions will linger in your mind. Vivid with the cadences of a particular time and place—North Carolina in the 1990’s—South of Heaven presents a dazzling comparison of fiery, idealized, long-ago love, versus the more complex experience of love in middle age. ~Cary Holladay, Brides in the Sky: Stories and a Novella

Wise and funny, Patti Meredith’s story of love and possibility and emus is about coming to terms with life’s twists and turns and finding bits of Heaven wherever you are. An enchanting debut from a natural-born storyteller, you’ll laugh and cry and find your heart just a little bigger by the last page. ~Sonja Livingston, author of Ghostbread

With an impeccable ear for dialogue, an artist’s eye for detail, and deep understanding of the push and pull of family, Meredith gives us South of Heaven—a celebration of growth and survival when confronted by mistakes and denial and, ultimately, how people can be transformed by acceptance and the astonishing surprises we should all be looking for. A beautiful read! ~Darnell Arnoult, author of Sufficient Grace and Galaxie Wagon

Time lingered more than passed in the Sandhills of North Carolina, where no ancient mountains or ocean tides marked the days. The Sandhills lay low, midway between. Flat land where, in summer, acres of lank-leafed tobacco flourished in spite of its fall from grace.

A venetian blind sagged over the front window of the Citizen-Times. Fern McQueen was careful with the tattered pull. Every morning she expected the string to unravel in her hand.

Across the way on the courthouse lawn, her son sat on a granite bench tucked beneath a white oak, a memorial to her husband, Mac, missing in action since the Vietnam War. Dean visited the bench most mornings before clocking in at Frank’s Garage. “We talk, Mama,” he said. “In my head.” Fern had tried to dissuade her son from telling people about these “talks,” knowing it only brought about more pity from the town of Carthage. But Dean was Dean. Her boy had no secrets.

Fern had never held out hope Mac would be found alive. She’d known he was gone, maybe even before the earnest men in stiff uniforms said missing in action. That was twenty-six years ago.

A woman whose husband had been lost on the same mission as Mac recently sent Fern a letter claiming to know about an excavation site in Laos. She said news would be coming soon. Fern had gotten other letters through the years from groups asking her to sign petitions, join their efforts. She never had. Fern believed Mac going missing was a misery dealt by the hand of God. A misery she’d brought upon herself. She’d thrown all the letters away.

With the dogwoods declaring spring, tired Christmas lights still dangled from worn cords along the flat roofline of Moore County’s sandstone courthouse. The lights remained year-round, being too much trouble to take down and put back up. Surely the strands had been replaced, but in Fern’s mind, they were the same ones that glowed red and green years ago on that snowy December night that changed everything.

It was as if every way she turned, a monument stood to all she could not undo.

Fern stepped back from the window so as not to be seen by other early risers making their way to work. She knew plenty in town thought her standoffish, but she was mostly only wary of attention.

She fiddled with the tortoiseshell clip slipping from her hair. Forty-six was too old for a ponytail. Too old for hair that fell halfway down her back. But Fern had never gotten around to cutting it. Premature gray sneaked through the black like an omen. Soon she would wind her hair in a bun, declare herself a crone, and be done with it.

She settled into her unsteady chair that was more apt to tilt than swivel. She felt a strain in her wrist when she typed at her shiny new IBM computer, reminding her that despite the idle nature of time, change could come. She’d refused the sleek metal furniture sent over from the home office in Southern Pines. “Come on, lady, get with it. It’s 1998,” the delivery man had said.

“I’m not trading solid wood for that,” she’d told him.

Her new boss, a boy nearly half her age and a recent graduate of the University of North Carolina, had instigated the upgrade. The Carthage bureau for the Citizen-Times was a two-person operation, and his side of the room reminded Fern of a spaceship cockpit with that chrome-legged desk and black mesh chair she wouldn’t trust. Her great-grandfather had built this building across from the courthouse for a dry goods store, and to her relief, the pine floors, tin-tile ceiling, and what she couldn’t help but believe was the scent of her grandmother’s rosewater perfume overcame Robert Clayton Yarborough II’s vision for the future.

Fern lit a Salem Light. Robert was an occasional smoker, and without discussion they had struck a bargain to break company rules. Another of his positive qualities was he rarely showed up before ten o’clock, giving Fern plenty of uninterrupted thinking time. She’d been worried when her old boss retired, but Robert had turned out to be fairly entertaining. She’d never seen anyone get so excited over a school board meeting, even though he had yet to remember exactly when and where the meetings were held. “Job security,” she told her best friend, Carol Ann. “He may have a high-priced diploma, but I’ve got sense enough to use a calendar.”

She found her daily e-mail from Thompson Funeral Home to get a start on the obituaries. Eileen Robinson. Good riddance. Eileen had been one of her daddy’s high school girlfriends and hadn’t liked it one bit when he eloped with Matilda Moore from Red Springs. Fern suspected Eileen had made it her mission to spread the worst gossip about her parents, not that either of them ever missed a chance to cause a scene.

Now gossip sold newspapers. Even the front page of the Citizen-Times featured a picture of President Clinton and that pretty intern. Stories about the President’s alleged affairs printed in black and white on the front page rattled Fern. That kind of mess had been going on since the beginning of time. How come reporters wanted to talk about it all of a sudden? Robert maintained revealing the scandal “broke new ground for freedom of speech and ushered in a new era of accountability.”

She’d asked him if he was familiar with the National Enquirer.

“We’re talking about the truth, Fern,” he’d said. “Everybody knows he’s a hound dog. I can’t believe you’re defending him.”

It wasn’t the hound dog she was defending. She pitied the girl, her dalliance in twenty-four-point font for all to see. Fern recognized innocence in her young starstruck brown eyes. Innocence and need. A cruel combination. Fern knew how a young mistake could mark a life.

The bell over the front door jangled and a broad-shouldered man in a light gray suit stepped inside. His smile made it seem like they already shared a joke. “Too early?”

Fern covered her ashtray with yesterday’s paper. No need to flaunt a bad habit. “A little, but come on in.” She believed in dressing for comfort, and it wasn’t like her to judge, but she thought the man’s suit would benefit from a steam iron.

He reached out a hand when she came from behind her desk. “Roy Puckett, pastor at New Hope Methodist.”

She’d seen him at his mailbox. “Fern McQueen. I live across the road from you.” To her way of thinking, preachers were all a bunch of hypocrites, but Roy Puckett’s round innocent face and curly brown hair hindered her cynical side.

“Barrett House. I read the historical marker.” His accent confirmed the church’s claim he came from Charleston. A widower with a young daughter, the press release said. Fern lived with her eighty-year-old aunt, and there was a time Belle would have insisted on carrying her new neighbors a cake, but with her aunt’s mind slipping, those days were gone.

As tall as he was, Fern stood eye-to-eye with the preacher. “My sister Leona says if we don’t paint soon the preservation people are going to take back their sign.”

“Looks fine to me. I don’t care to see the old places all shined up. It’s unnatural.” He held out an envelope. “My Faith Corner column. You probably prefer what I believe they call a floppy disc, but I’m having trouble with my computer.” He looked up at the ceiling, then back to her. “It’s not entirely the computer’s fault. Truth is, I’m still in the dark ages.”

“You’ll be right at home around here,” Fern said. “I feel lucky not to get these things on stone slabs.”

To read the rest of South of Heaven, order your copy today and have it delivered to your house when it is released in June/July, 2022