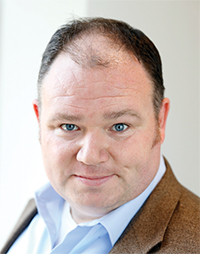 Colin Dodds grew up in Massachusetts and lived in California briefly, before finishing his education in New York City. Since then, he’s made his living as a journalist, editor, copywriter and video producer. Over the last seven years, his poetry has appeared in hundreds of publications, among them Easy Street, Gravel Literary Magazine, and West Trade Review, and has been nominated for the Pushcart Prize and the Best of the Net Anthology. He also writes novels and screenplays, has directed a short film, and built a twelve-foot-high pyramid out of PVC pipe, plywood and zip ties. Colin lives in New York City with his wife and daughter. You can find more of his work at thecolindodds.com.

When I read Colin’s work, one of his own lines comes to mind: “What persists / is glad amazement.” His work consistently delights with humor, inventiveness, a blessed dose of sarcasm and, yes, wisdom (despite his best intentions). We are all “born for that other thing,” and this is that other thing. — Sharon Mesmer, author of Greetings From My Girlie Leisure Place (Bloof Books, 2015)

Spokes of an Uneven Wheel speaks for noses out of joint, joints out of town, and entire towns out of luck. And we are there too, among the overcast of characters. Like a singer songwriter who’s masterpiece depends on laryngitis and a guitar in the pawnshop, in total exile from easy street. But exile from is also exile to, where despite the bleak economics, overbooked disappointment calendars, and a landscape of scapegoats, we prevail together. — Brendan Lorber, author, If this is paradise why are we still driving?

Mercy in the Wilderness

Knotted rat carcass and severed wing on the pavement
Blinding sun and roaring wind
Skies made of dragons, words of snakes

There is, in the day’s tantrums and truisms,
a peering like moonlight through a keyhole
tumblers of tangled foliage
We freeze where we stand when for a moment
the mechanism engages turns and clicks

There is mercy in the wilderness

Coney Island after a Bad Week

The seagulls are aligned, the ocean has all day
The train stutters like the stanched retch
of a rainbow about to spill its guts

Beside the boardwalk
two thousand years of sneering discontinuity
squints through a hard-candy diadem
Or was that a wink?

Like the bible and the eternal cities—
only for a while, but more so
In fast nickels and slow dimes
the price of seeing so steep
that no trick is cheap

But who wouldn’t pay?

Dirty shoes have polished clean a path
in the dirty linoleum where construction workers
reenact old arguments with Lou Ferrigno
Go ahead, chase me, Lou!
while baseball and the other ways
they trick little boys into civilization
play all night

Heads like helmets of a demobilized army
Faces borrowed, blended by hardship and rain
sweetened by old cheats called virtues

Unsounded inside God’s best idea, going on
making no sense, woodgrain of our smoke
sidewalk of our spit, plaster of our neglect
The old song, the old three dimensions
same as wherever we were taking a break from