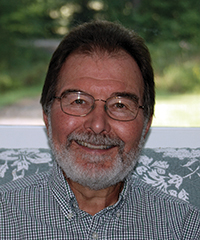 George Longenecker lives in Middlesex, Vermont where he’s inspired by the weather, the phases of the moon and stories in the news. He taught at Vermont Technical College, where he was Professor and Chair of the Department of English, Humanities and Social Sciences. Now he writes, travels, hikes and skis. His poems have been published in many journals, including Atlanta Review, Haight Ashbury Literary Journal, Isthmus, The Main Street Rag, Paterson Review, Poetry Quarterly, Saranac Review, Whale Road Review and War, Literature & the Arts.

George Longenecker’s STAR ROUTE is an en excellent and moving collection. It’s rare to find a poet who writes knowledgeably and in precise detail about nature but also turns his craft to poems about married love, our constant wars, about the death of children, of strangers, of friends, of our destruction of the planet and each other. Here is a poet with intelligence, craft and heart. –Marge Piercy

George Longenecker writes as both stargazer and Earthling, shifting back and forth in his local chronicles between cosmic wonder and immense particulars. Both car fenders and stars shine with equal glow in these poems. His parallax vision coalesces into a single yet complex outlook that captures his human vista—both inscrutable distance and exquisite minutiae. The more details Longenecker gets down, both animate and inanimate, the more tender he becomes in his awareness as a minute mortal with a wide eye and fragile hand. “Planets and stars fall to the horizon,” he writes in “It Doesn’t Matter Much on Juppiter, “A storm blows on Jupiter/ older than all of our history—/ Love, I hope we can survive/ for one more night.” –Chard deNiord

Just three lights shine on the opposite shore,
at ten the waxing moon is only a dim sliver,
sky still too bright to see stars.

All night the Milky Way brightens the sky
from Idaho south to Utah,
a plane blinks red,
a single satellite moves east to west.
All the rest is stars.

In desert sky shine stars light-years old,
eons from now somebody
may be watching our star,
by then we’ll probably be gone
(maybe we’ll have blown ourselves away)
it’s hardly important to the Milky Way

whether our star shines or not—
twilight comes by four,
across the lake a porch light comes on,
already the Milky Way is floating into dawn,
already one white pelican flies low over Bear Lake,
all the rest is stars.

She lived on the Star Route,
Bliss Pond Road,
her dented rural mailbox
one of two on the corner by a sugar maple.

Let me kiss you, she said.
I missed my turn and drove
all the way to Libra; November stars
flared between black branches.
Somewhere between Bliss Pond and Orion,
I turned and followed the right road home.

Let me kiss you, she said,
and I stayed longer.

Some nights we still spread
our wings and fly west
past Orion, wings tip to tip,
Libra to Pisces, along the Star Route,
up over the Pleiades,
blue star dust sparks in her eyes—

Let me kiss you, she says
and we swoop so low over the pond
that our feathers
touch stars in the water.

Imagine earth below us, she says,
I think of a stone slab atop Mount Hunger,
where I’ve napped in warm sun;
she says to look for balance in life,
I think of stone balancing for eons—
then I think of hunger, remember my dream,
a hotel I can’t get out of,
a dining room I can’t find, student papers
piling forever higher,
but I want to think of birds—
yellow throat warblers
that balance on tiny branches;
branch out, she says,
then we chant om,
I hear warblers sing;
think inside your body,
she says, as we breathe deeply,
I think of my heart as electrical resistance,
hear ohm, feel it beating,
imagine myself a warbler,
heartbeat five times faster;
we move into tree pose, I balance, feel my heart pump,
think of silly clichés—heartache, heartsick;
I’m balancing on a pine branch,
resting on warm stone,
my heart beats so slowly and perfectly,
I’m barely aware I’m here.

Horns wail through Ogallala and Omaha—
trains pass over buried bones of mastodons,
hauling fossiliferous fuel through the Nebraska night.

Diesel engines call each other—
the coal trains’ long lament,
a requiem for fossils exhumed and delivered,
through Nebraska in the night.

Train whistles in the night—
the burning of the earth,
ancient species transformed into electricity
in power plant furnaces—
bright lights of Lincoln and Omaha
lit by dinosaurs riding long coal trains.

In a requiem for extinction,
trains howl in the Nebraska night.