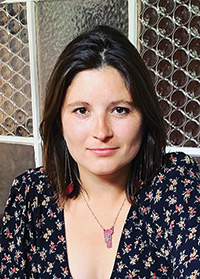 Erika Nichols-Frazer is the author of the memoir Feed Me: A Story of Food, Love and Mental Illness (Casper Press, 2022). She edited the anthology A Tether to This World: Stories & Poems About Recovery (Main Street Rag, 2021). She has an MFA from the Bennington Writing Seminars. She lives in Vermont, where she is a staff writer at a community newspaper.

Staring Too Closely, Erika Nichols-Frazer’s powerful new collection shows us how life can bring us to breaking, especially when our bodies and minds betray. But sandwiched between such troubles are also moments of triumph and transcendence – simple joys and abundance that surround and sustain us in the face of pain and loss. Nichols-Frazer, by celebrating our full human experience, reminds us that even grief can be “a rudder slicing through the murk.”  ~AE Hines

Ordinary things—
the way your hair falls to one side,
your glasses fogging up over a mug of dark coffee,
the sweet earthy crunch of a carrot you grew and pulled from ground.

There are days like this, good days. I want you to know that.

What I want to tell you is this:
I am a poor approximation of myself.

I want you to say it, I want to hear it in your voice:

I’ve dumped the water from the vases
in my passenger seat to keep them from
spilling. She’s given me three today.

She refuses the hospital food then claims
they’re starving her, so I’ve taken to bringing
her favorite foods—guacamole, chevre
with chives, pizza, dark chocolate.

The flowers keep coming, expensive and
colorful arrangements with ribbons
and cards from clients, colleagues,
family, even my office and writing group.

She’s sure the nurses are stealing
them, so she keeps giving me
vases to bring home to my apartment,

which is cluttered with them and the
sickly-sweet smell of hospital.

And then it’s the photographs of my
brother and me that I tacked to her bulletin
board. She makes me take them down and put
them in her purse because, she says,
she’s going home any day now.

At least she knows where she is,
is getting most of the basic questions
right: when, who, where.

In the ICU she answered
We’re in Prague; we flew here
and we are at a summer concert in the meadow
and skiing in Colorado.

She doesn’t know Mother’s Day is this weekend.
We got permission to cram seven of us into her room
and bring her grilled asparagus, guacamole, salmon.

Here is what I tell people who ask about my Mother’s Day plans:

My mother is in the hospital. My mother fell down the stairs.
My mother split her head open, cracked her jaw, wrist,
bruised bones, spine, eye. My mother sustained a
traumatic brain injury.

Here is what I do not tell them:

I indulge her delusions daily, nod wide-eyed and
tight-lipped while she says she was sleeping
at the bottom of the wooden stairs (in a puddle
of her own blood), or ‒ even more improbably ‒

That my father was the one who fell down the stairs,
my father who called 9-1-1, who held her small and
broken body in his arms, howling. It’s a conspiracy,
she claims; he’s trying to get rid of her.

My heart breaks every day.

Mother’s Day Is Coming
Is Your Mother Special? Buy Her Flowers!

And I cry so hard I have to pull over.

On your way to the middle, you pass Neptune.
You don’t notice it at first.
It isn’t there until one day it just is, and you think,
has my house always been this red?

You are 30,000 feet above the clouds spitting at angels.
You are looking down on your house wrapped in flames.
where it was now it isn’t, who cares.

You are speeding down rollercoaster Route 89 when your radar gun
warns you the cops are coming half a flash too late.

Neptune is Double Jeopardy, early parole,
getting off on a technicality;
It’s all in the fine print.

The groundhog’s shadow taunts him in
flashbacks and never-ending reruns, scratched disks and
déjà vu running on a loop.

Neptune is utterly forgettable, regrettable,
another face without a name or a name without a face,
so-and-so you met that time at that bar or party or wherever,
with whom you hush-slurred close trading tragedies,
who was even listening anyway,
you were just waiting, impatient to fuck.

Neptune is no-man’s land, out of bounds,
across the border, outer limits, fault!

It’s like trying to remember your dreams;
it’s always hanging off the tip of your tongue.
Neptune isn’t even the main event on the home field.
It’s the opener for the opening band, just a few
lonely people swaying with their eyes closed.

Neptune is that place you go
when you crave darkness
and your own name sounds foreign
and you need to know that someone is alive, somewhere.

The breath is heavy with silence and repentance:
White noise heat lightning.

A pillow scream catches the lifeforce slowly leaking
out of your inert body, sandwiched between
utopia’s balls & the devil’s anus.

The azurelean tides of salt & bile,
tears collect in freshwater pools in the shallow end,
thin ice skims the surface and lures you
down
to a stop-motion flow.

Neptune is dried up, dug out, stripped.
Neptune feasts in drought and deluge
Dousing crops they diluted, modified
gentrified and calcified.

It’s an overdue meltdown,
the temper tantrum of a petulant god
Painting the sky salacious.

It’s the seven circles of purgatory, laid with
lost causes & false hopes
Superstitions and obsolete traditions.
Eyes watch you constantly,
The color of a storm at sea.

He salted our wombs
and poisoned our children from the inside out.
don’t ask, don’t tell
forced our daughters into Blackwaters and back alleys.

Sharpen your tongues and swords.
Neptune is the farthest point from Nirvana.

Neptune was built on contradiction.
It’s a place where everyone has been but
no one knows how to get there.
It hides behind a curtain of
anonymity
to give the illusion of safe.

It’s like a bad trip: you swear
this has all happened before and
you’re trapped behind the looking glass
buried in language barriers and generation gaps,
cracks in time and unfounded theories
Mired in Super PACs and dirty deals,
spams and scams and rip-offs
loopholes and endless filibusters.

Neptune is that suspicious gel that oozed
out of the eight-ball we smashed,
Ask Again Later, Outlook not so good,
cheap black plastic and poison on cream-colored carpet.

Neptune is missed boats, fallen stars,
a tree crashing in the eternal forest, and
no one ever hears it.