Stories OFF the Garden Path

Twelve stories veer left or right-light or dark-on a garden path that splits. The darker path includes stories reminiscent of Roald Dahl’s while those on the light path are simply light-hearted. The reader may expect to find humor, cold or warm, in most of these stories. Shades are permitted, too: Stories that are both light and dark. 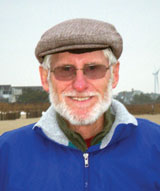 Carl F. Thompson, Jr.
Carl F. Thompson, Jr. is a short-story writer now at work on his first novel. He is a retired federal employee who lives with his wife Patricia in Annandale, Virginia, and at Rehoboth Beach, Delaware. A 1969 graduate of the University of North Carolina at Chapel Hill, he is a U.S. Army veteran, where he served as an upper air meteorological observer (a “balloon jockey”) in Vietnam. He began writing fiction post-retirement. His short stories have appeared in The Main Street Rag, The Potomac Review, The William and Mary Review, Phantasmagoria, Thema, descant, The New Orphic Review, and elsewhere. He tied for second place in Main Street Rag’s 2004 Fiction Contest and was a runner up in MSR’s 2003 Fiction Contest. Garden Path is his first book of fiction.

The quirky, gem-like stories collected in Carl F. Thompson, Jr.’s Stories OFF the Garden Path remind us that the singular pleasure of a well-wrought tale is hard to come by these days. With the grace of a master, Thompson blends the familiar with the strange, and a sublime, uncanny charm prevails-even in those stories firmly grounded in reality. Each of these fine tales delivers on its promise to uncover secrets of desire and pride, leaving us free to savor Thompson’s classic wit and instinct for detail, which makes Stories OFF the Garden Path something of a sentimental rarity; this is a book to curl up with and enjoy.

–Laura Ellen Scott, Fiction Editor for Prick of the Spindle

I met him in a coffee shop. Nothing fancy, a smudge: Klinger’s Café. Solvents for the Soul, its signboard said. An oddity anywhere else, but not in this part of town, where nothing kept shape but the darkness.

Outside it was dead-winter cold. I’d turned my collar up. My feet clicked against December’s grey slate of street. Hands in pockets, my breath steaming like the soul of coffee itself–then rattling overhead, this solicitous sign, a siren in wind. Solvents for the Soul, indeed. Not Solutions, not–even better–Indulgences. But I had no business rewriting it even for amusement’s sake. Doctor’s orders.

Tinkling of doorbell as I stepped inside. Dwarf-sized shop, rent presumably anemic: Five Formica-topped tables, three with customers. Two ratty-looking booths, their once semi-plush cushions long ago squeezed flat by the heft of donut dunkers. Both occupied, one by a stout and grungy twosome, the second by a man with his face buried under hunched shoulders, an innocuous grey head.

Young lad behind the counter: twenty-one or -two, white-smocked, flush-cheeked, a mild but honest-looking smile. Behind him a blackboard fashioned the “Solvents” by geography: Roman Forum, Parisian Culture, British Biscuit, others, each bearing small, semi-legible chalk-work scribbles meant to convey this or that quality, “baldy obstreperous,” “sumptuously seductive;” you get the idea–pretension in a dive.

Buenos Aires Cappuccino Collegial, my first request, was unavailable: the cappuccino machine needed mending; they’d asked a month ago, but repair was regrettably slow. They did have Greenwich Candelabra, however. “It tastes pretty much like tiramisu,” the boy advised.

“Just what I want at nine a.m.,” I said, “dessert.” When he looked at me uncertainly I added, “Yes, yes, that’ll be fine.” Two dollars, but with half-price refills. “And the coffee cake, too, please.”

I took a table close to the front, a chair obliquely facing the window. I now effectively presented my back to everyone in the room except the loner in the front booth, who also faced the window. My choices (besides eat and drink) were to (1) read someone’s discarded business section of the newspaper (others were similarly reading what may have been a communally shared paper), (2) stare past the fog of winter sunlight caught in its transit of grimy window, or (3) errantly look at the man in the booth, who, from my advantage, sat in profile.

The business news was certainly an option, as these days it carried not only the staid quotes of Ups and Downs, but photos of the occasional handcuffed billionaire, or sprightly tales of the nouveau-chic niche market in personal body armor, or the cheekiness of nanotechnology futures.

I swear to you I had been sipping my lamentable Oreo mousse with the paper laid flat, reading only this or that article, when the gentleman from the booth addressed me:

Pattern recognition is one of the lovelier arts of the human soul: to see something, or part of something, and fill it in, to complete wholeness where there had in fact been a hole in comprehension. As I said, I’d seen this man only in profile–the left side of his face; I’d read with the paper lying flat on the table, my eyes focused on paper, my brain consuming only stories of venture capital and insider trading–this man’s visage being nothing more to me than a bland peripheral grey quadrant of no distinction whatsoever. I’d found only my coffee regrettable, not him. Yet here he was rotating his face into play, rotating his soul into my span of attention. And this, I saw, changed everything.

I hesitated. “I’m sorry, I don’t follow.” A defensible answer.

The man merely looked, leaving his remark incomplete. His eyes were large and quiet: perfectly round, motionless orbs, black as coffee. But these dark eminences were unnervingly displaced, their arrangement unnatural. I stared back as long as I could, to show my innocence, my lack of understanding, his inescapable misunderstanding. Any accusation was quite his own: that was what my look said. We waited, two uncertain quantities–he would back down. But yet he looked.

“Sorry,” I said finally, returning to the page.

Still he would not give up.

“Please. For the honor of your presence.” It was now impossible not to look. He had extended an arm, his palm up, toward the unoccupied side of his booth. “Sit.”

He calmly waited. I realized in fact there was a courtliness in his manner of defiance, if that is what it was. In theory I could choose belligerence, taking his forwardness as the true insurrection.

But how to deny him?

The ordinary tools were not, I found, available.

“Yes, but coffee on a morning such as this is always such a pleasant thing,” he said, rising as if to escort me to the seat.