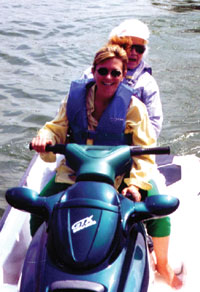 Suzanne Baldwin Leitner is a native North Carolinian, born and reared in Lincoln County. She currently lives in Cornelius, North Carolina with her husband and daughter and writes poetry, essays and fiction. She has conducted poetry workshops for students in elementary and middle schools in Mecklenburg and Iredell Counties, and has a B.A. in English from Appalachian State University and a J.D. from the Wake Forest University School of Law. Her publishing credits include Main Street Rag, Crucible, The Lyricist, Wellspring, Cairn, Lonzie’s Fried Chicken, and Bay Leaves. Her work has also been recognized by various writing contests. She was First Prize winner in the 2000 Lonzie’s Fried Chicken poetry contest, First Prize winner in the 2000 contest sponsored by the Poetry Council of North Carolina in the Charles Shull Category for Traditional Poetry, and Third Prize winner in the Writer’s Workshop 1997 International Poetry Competition, among others. Leitner also leads an adult Sunday School class and sings in the choir at her church.

On a platform waiting for a Saturday train,
great-granddaddy stood average
in height, but not looks, handsome and straight,
a gentle man with dangerous
brothers, a musician
and moonshiner, father and outlaw, forced
by mountain economics and Prohibition
to make a risky living
for wife and their six,
while she worked longer in a day than the sun itself,
grew and cooked food, changed diapers,
boiled clothes in a kettle, hunted and skinned squirrel,
taught the girls some manners and failed
miserably to wear herself out—lived to be 101.

At the train stop, he just stood there waiting, listening
to his neighbors gossip while they stood waiting,
about to be witnesses, for all the good they did.
Soon the murderer showed up,
gun in belt, hidden under dirty coat,
eyes nervous as he hailed great-granddaddy,
and clattered across the wooden platform.
My kinsman turned, smiled slightly when he saw
the coward heading toward him—
probably thinking what’s that scoundrel doin’ here?—
and reached into his inside coat pocket
for his snuff tin, a treat in the face of having
to deal with that bastard Carson so early in the day,
the snuff tin that Carson would later claim
he thought was a gun, say that’s what made him
draw down on an unarmed man, and given
the reputation of great-granddaddy’s people
in Calderwood, the judge saw he had no choice
but to convict on mere manslaughter. So inside of five years
my grandmother and her sisters, little girls still,
saw the man who shot their daddy walking around
free, not a mouth but his own to feed, and nobody
alive that would mourn him if he died. Great Grandmother
lived a full seventy years without her true love—
a widow all her life.

Chestnuts give you gas, now that’s a fact.

Nobody sitting around the fire disputed that truth.
But nobody stopped eating chestnuts, sitting there
with no radio, no television
looking at each other with nothing to do
but say the stories, bat them to and fro, test them
out for their sounds and sustenance.
Just to prove his point about the chestnuts,
Paw-paw let one rip
which started the granddaughters laughing.

He made his face serious and eyed each giggler.
Now that can be not sa funny.
Most ‘specially if you’re a Mauney girl.

Father, don’t start in on those Mauneys.

You know it’s true. Nary a one married
‘cause she couldn’t hold her wind. Ain’t a man
alive could stand that for long.

And years later the granddaughter
turned teacher wondered if, like the Aphrodite-cursed
wives of Lemnos, the Mauney sisters’ would-be suitors
were driven away by the smell
or by the noise.

My brother and I laugh with her.
But my grandmother’s face, now still,
reminds us of her other stories.
How she stuffed her shoes with newspaper to keep
the mountain snow from coming through the holes.
She shared those shoes with two of her sisters.
How she ate food that was so rank
a sniffing animal would have left it, even in Hoover times.
How she saw her own mother, a grand lady
in any true sense,
begin to regard other people’s discards as luxuries,
and be treated with scorn for committing the offense
of being a widow with six young daughters.
How she did the hardest work of all at the age of ten:
Getting by in Hoover times.
Oh, baby brother, I see it in your eyes, even on your tongue.
Don’t say it. Resist the impulse, you young alumnus.
You business-degree totin’ babe in her woods,
wearing your graduation like a day-old haircut.
Don’t. Her education is more than complete.
“But it wasn’t Hoover’s fault, Mammaw …”

Don’t you tell me it wasn’t Hoover’s fault!
I was there when they announced the ‘lection of Roosevelt.
And in the streets of downtown Mar’ville
grown men were cryin’! Cryin’ over bein’ grateful! Gobs of ‘em.
Grown men! And women too. Lordy, the streets were full.
Don’t you tell me about it.
Nobody has to tell me about it. I lived it.
Yes sir. I know a little somethin’ about Hoover times.