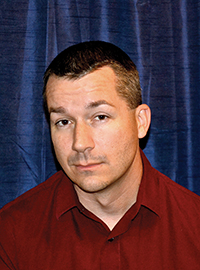 Ty Stumpf is the Chair of the Humanities Department at Central Carolina Community College. He received his BA in English from Catawba College and his MA in English and creative writing from North Carolina State University. Ty is the recipient of a North Carolina Arts Council Regional Artist Project Grant and a Member-at-Large of the NC Poetry Society. His poetry has appeared in Passages North, Nashville Review, Harpur Palate, Prime Number Magazine, Kakalak, and other journals. Ty and his wife, Bianka, have a son named Jude and a daughter named Cora. For more info, visit tystumpf.com.

An Old Testament prophet and a watchful father, Stumpf worries over a perilous world where children seem safer “seat-belted” in the womb. Because we’re born from clay “scarred red,” these poems ask that we offer asylum to the broken ones—the “shattered-tooth addict,” the woman whose back is “blackened with a boot-shaped bruise.” Wallace Stevens alleges poems are provisional, like all “myths” that order chaos.  This well-crafted, wise collection will survive for a long time. ~Janice Fuller

Suburban Burn deftly flashes a flame on the particulars of modern life. In its whispering pages we strip our skins as the morning light swells/more bone than muscle, we bruise beautifully. His son sings and his daughter momentarily shoulders a world too full of darkness, Ty Stumpf’s poetry is smart, brazen, and vulpine. This collection is to be swallowed and savored. –Stacy Nigliazzo, author of Scissored Moon

Her four-year-old palms cupped
the two golden dollars I gave her.

I told her how Sacagawea, the Indian woman on the coins,
shepherded Lewis and Clark west and back,
while pregnant or carrying her infant son.
I didn’t tell her that Sacagawea gave that child up to Clark,
or how, years later, Lewis killed himself when he discovered
a world too full of darkness.

Between the kitchen and her bedroom,
she slipped the coins in her mouth like communion wafers.
She sounded like an animal as the coins dammed her throat.

She curled on the carpet,
struggling for air.
Her blue-tinted lips.
I snatched her up
by the ankles,
hanging her
with my left hand,
clubbing her back
with my right.

The coins tumbled into the carpet’s silence.
She wailed as when the doctor raised her
into the light for the first time.

We sank to the floor.
For a moment, I became Lewis,
and the world tunneled to the size of a gun’s barrel.
Sacagawea looking over her shoulder.
The baby on her back already disappearing.

Lightning bugs prick the darkness,
rising from a soft fall.
Jude and Cora cup their hands
over the bugs, peering between their thumbs
the yellow lights pulse,
little stars in their sky-dark hands.
My wife’s Mawmaw pulls a cigarette
down to the filter, drowning the nub
in the morning’s dregs of coffee.
Dogs collapsed into commas at her feet.

The logwoods get men money
in their pockets. The cash comes in thick
sticky stacks that the men peel apart.
Even the best have stories of trees
awakening at the saw’s final cut,
electrified, leaping from the stump.
Their many arms outstretched,
grabbing for men on their way down.
Trunks snapping men’s limbs,
splitting their skulls into kindling
perfect for the stove.

We laugh around the table,
food mounded like a church covered-dish
on Mawmaw and Pawpaw’s kitchen counters.
Double-third cousins,
a kin that sounds worse than it is.
Mawmaw says they’re no more inbred
than anyone else this far out.
The holler is a hard place to love
and a harder place to leave.

The moonshine stills that dripped
blindingly clear liquid
have evaporated from the woods.
The old men who ran them
either eaten by cancer
or drowned by drink.

Now daddies duct-tape the trailer’s
bedroom door shut to cook meth
so that the fumes won’t
slither around the babies
who sleep where they fall
like dropped dolls.

We waded into the family’s creek;
our children flipped rocks,
looking for crawdads, the brown bodies
dotted like the creek floor.
I limped into the cold sting of water,
my feet tender on the rocky creek bed.
It took ten rocks,
but I found a crawdad,
more insect than meal.
The claws waving,
clamping the base of my thumb.
Our children already lining a bucket
with their captives.

My father kept
a folder labeled “When I Die” in his desk.
The top sheets, a two-page typed
autobiography with a blank for the last date.

Thirty Novembers of flowers.
The price noted in his ledgers
right below the electric bill.
Right above the check for my birthday.

His x-rays glowed with the tumor
like a white spider
fattening in his webbed lung.

In his office, I sit in a sea of green ledgers,
their grainy pages covered in light blue graph lines.
In each, his crisp handwriting is a solid black.
Nothing crossed out.

I’ve torn his obituary from the paper,
I fold the ragged edges back,
crease the paper until the corners sharpen.