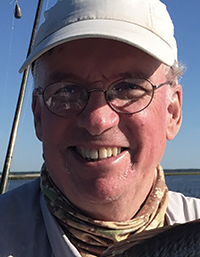 John Stupp holds academic degrees from Notre Dame University, The University of British Columbia and Case Western Reserve University in Cleveland. From 1967-1970 he worked every summer in the Ford Motor Engine Foundry in Cleveland, Ohio while going to college. Since then he has lived and worked in various states as a jazz musician, university instructor, taxi driver, radio news writer, waiter, and paralegal. John is the author of two full-length poetry collections Advice from the Bed of a Friend (Main Street Rag, 2015) and Pawleys Island (Finishing Line Press, 2017) and spends his spare time playing with his dog Buster and fishing in South Carolina.

In Summer Job, John Stupp takes us…before the sacred throne/of Henry Ford…into the foundry where the punch of working-class language thrills: millwrights, tinsmith, shift whistle. With short lines humming like a running engine, Stupp strips down to the damage: to the lift and stack/lift and stack…the dirty air from the engine lines…to the heart of it: …how many chests were cut open/and put back/without all the parts? These tough poems commandeer the beauty/horror of the production line. Buy this book! —Jan Beatty

In Summer Job, John Stupp transports us inside a Cleveland auto plant, full of sweat, metal, and a little laughter. This is a world where the working-class reigns supreme: we’re introduced to Bob the bowling left hander, Helmut the German storm trooper thief, KFC loving Felix, and the unnamed welders and foremen. In these striking, heartfelt poems, work is the angel that saves us, clocking us in and out, covering us with its “dirty wings.” —Kayla Sargeson

With a speaker whose voice is sturdy as steel cable, the poems in Summer Job are machined with great precision. The images offer a unique look at what lies between the conveyor, the furnace and the pouring ladles to reveal the distinct lives of the characters operating them. Summer Job is an engine humming with humanity. —Lisa Alexander