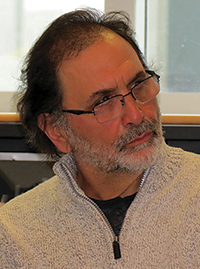 John L. Stanizzi is author of Ecstasy Among Ghosts, Sleepwalking, Dance Against the Wall, After the Bell, Hallelujah Time!, High Tide – Ebb Tide, Four Bits – Fifty 50-Word Pieces, and Chants. His poems have appeared in Prairie Schooner, American Life in Poetry, The New York Quarterly, Paterson Literary Review, The Cortland Review, Rattle, Tar River Poetry, Connecticut River Review, and many others. Stanizzi has been translated into Italian and his poems have in appeared many journals in Italy. His translator is Angela D’Ambra. Stanizzi teaches literature at Manchester Community College in Manchester, Connecticut, and lives with his wife, Carol, in Coventry.

John Stanizzi’s poetry grows stronger and wilder! Like Hopkins’ windhover that gyres then slices the sky, the poems in Sundowning circle their prey, which is beauty itself, then dive with breath-taking abandon to seize it. The beauty and sorrow here will break your heart and put it back together again. Come listen to him spin yarns, bring the dead to life, and show you the brute beauty and valour and act of all things. ~Rennie McQuilkin, CT Poet Laureate (2015-2018), author of The Readiness and other books.

I knew that every time you limped heavy
into the front room of the crooked,
creaking four-story walk-up
to place an open letter on top of the TV,
I wouldn’t be able to watch cartoons for a week,
or listen to the radio,
or speak above a whisper.

The letters were so thin
I could see my fingers through them,
small ghosts pressing against a flimsy white wall,
and the words were big loops and waves
which were beautiful
though all I understood
was that someone in Italy had died.

Most days it was just the two of us,
and while you spent the day cooking
and baking and washing clothes and praying,
I would count cars out the front window.

Then around noon you would turn
the hard, straight-backed wooden chair toward the avenue
and begin to chant the Rosary,
praying for all the children, your friends,
the saints in heaven, and for your husband, Daniel —
il mio Daniel you sang, il mio Daniel.

I would crawl under your chair and lie on my back,
listening for Daniel’s song,
and the other one, the one to the Blessed Mother –
Santa Maria! Madre di Dio!
your invocation rising to a wail.

I could feel the cars from the avenue
humming in the floorboards under my back,
and as you rocked your body slowly
I held your ankles,
and let you sail me through the tiny apartment
on the feathery back of something Holy —
Santa Maria! —
your knuckled fingers rubbing the beads,
your wrist broken 40 years ago

wrapped in a dish towel –
Madre di Dio! you sang,
and all these years later I think
of the stonework of your Faith,
and the certainty with which you called to the Virgin
that she would take your pain away,
heal your loneliness,
bring you no more beautifully wrought letters,
and give grace to the child beneath the chair.

And She came.
And She rocked you in her arms like a little girl
there in the declining sun
of a June afternoon, 1957,
whispering to you that your wrist would ache,
that Daniel would not return,
that there would be more letters,
and that She would be there with you
now and at the hour of your death,
Amen.

It was spring
when I wondered if the crocus
turned your speech blue
or if it was the other way around,
the crocus glowing
because of what you said,
blue against the newly turned sillion.

Either way
you said there were armies
of blue guys in the woods
disguising themselves
in unbelievable ways,
hiding behind trees,
gathering their anger,
preparing to descend on us
from all sides
boom! boom! boom!

You said
Listen to me!
We gotta get a couple guys
take these fuckers out
before they hit us
‘cause they’re coming
you better believe that.
Matter of fact
they’re here now.
Don’t look.
Don’t! Look!
There’s one right there.

And you rose stealthily
from your lawn chair
to sneak up on a flower,
motioning me away
with your hand.
Stay back!
you hissed,
protecting your son.
He’s right there.

And you closed in
on the blue crocus
wild and emerging,
to get it
before it got us,
all of us.

You never said a word about where you went
that time you disappeared for 5 straight days.
At my bedroom window I would invent
your car pulling in and what you would say

about where it was you’d been, but no one
ever spoke about that, or about when
your angry, broken sternum looked all done,
a hard-boiled egg just beneath the skin.

and say that you’d bring that tale to the grave.
You never spoke a word about the tiny rooms
in the two-bedroom walk-up where you’d have
to share the rats, the noise, the booze, the gloom

with Angelo and Jenny and eight kids,
or why you chose to change your name to John;
was it some fear you’d end up on the skids?
Giovanirro Emmanuelle needed to be gone?

You never explained the demons in your brain
that dragged you into the Venus Lounge each night
just ahead of closing time, disdain
ablaze and brandished in the beers held tight

between the fingers on both your meaty hands,
eight beers held and spilling above your head,
a message to the bouncers to just stand
aside awhile and watch the way you’d feed

the jukebox, chromium, decadent UFO,
blasting Dirty White Boy through the roof,
or Lou Reed telling us how the colored girls go
in doo-wop speak, a nonsense kind of truth.

It’s hard to imagine how much you didn’t tell
about the cases of gallons of Gallo in the car,
the pills you ate to crash but not to fall,
how you became the mayor of every bar.

We’re cracking the seal on a brand-new bottle of Jack
next to you here in the maudlin funeral light,
you looking like you’re about express some “fact,”
us raising a bottle in the air to God knows what.