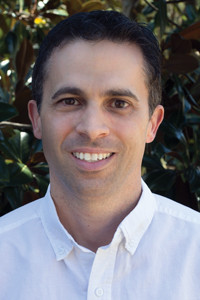 Chris Abbate’s poetry has appeared in Chagrin River Review, Blue Heron Review, and Comstock Review, among other journals. He has been nominated for the Pushcart Prize and a Best of the Net award, and has received awards in several poetry contests. He has a B.A. in English from Gordon College (Wenham, MA) and an M.A. in English from Southern Connecticut State University. A native of Hartford, CT, Chris resides in Holly Springs, NC with his wife and their papillon, Louis. He works as a programmer analyst for clinical trials and volunteers coaching youth in The First Tee golf program.

God is the glue for connection and mystery in Chris Abbate’s Talk About God, a masterful debut collection. These poems are about his Catholic childhood, the yearning to break away from convention and the unyielding need for patterns to manage the unforgiving nature of life. Yet, most of all, these poems speak of the connections between fathers and sons, husbands and wives (‘things don’t always have to mean something else; / it is okay for something to be as it is, / like two people sharing a bed /lying back to back between contented exhalations.’), and friends and neighbors. Abbate explores the chaos of adolescence and many years later, reflects on the breakup of his parents’ over fifty-year marriage through the exacting lens of ritual and geometry (‘Let’s say love / is a braiding of synapses, / an orgy of neurons, / and marriage / is a chemistry experiment / in need of a slight tweak /every decade or so.’) with carefully nuanced images that earn every bit of their screen time. Every poem in Talk About God reminds you to feel gratitude for the beauty of the present moment and not to forget how you can create a joyous and meaningful life.  —Alice Osborn, author of Heroes without Capes

To My Brother and Sisters

When it snowed
the car would be warming in the driveway.
By the time I got outside
the newspapers for my route
had been stacked in expectant piles
in the backseat of Dad’s Oldsmobile.
He steered with one knee
while his ink-black fingers
lifted coffee to his lips.
He stopped every few houses
for me to deliver yesterday’s news
to my vigilant customers.
The orange beat of hazard lights
cut through snowy dawn,
heralding our arrival.

One morning the car got stuck,
the tires spinning a groove in the snow.
Before I could get out to push,
Dad handed me his half-empty mug,
popped the trunk
and retrieved a small shovel
and a bucket with sand.
From the side view mirror
I watched the crown of his head bob,
his shoulders hunch
into digging and tossing,
and the ephemeral ghosts of his labor;
the vapor he breathed
into an oncoming winter he despised.

After he had folded himself
again behind the wheel
and I had returned his coffee,
I asked why he got up to drive me.
He replied that he loved me,
then gently pressed the accelerator –
enough for the sand to do its work
and the tires against the sand
and our bodies over the tires –
plodding us along this daily route
in spite of winter.
Not up and away,
but out and back around,
always returning a little lighter
to the place we began.

What was that talk about God before dinner,
those chants before eating, gazing into the chandelier?
Maybe it was our way of talking to each other,
a cotton language we filled with soft words,
the kind we imagined our parents spoke
between their pillows while we slept.

Why did Grandma hold Jesus on a cross
between her fingers while she watched soap operas?
Was it the same man she spoke to in the ceiling
after she had lost her keys, and shouted thanks to
when we heard them jingle in her pocketbook?
He hung at the head of our classroom
and we talked to him whenever we needed help too.

What were the word circuses we created at Mass,
the white tent and menagerie over our bowed heads
as if we needed forgiveness?
Afterwards, we would shed our penitent blazers
while the adults spoke through steam
over the rims of Styrofoam coffee cups.
Their words sounded like sugar.

What was the weight teachers dropped into our backpacks,
the stones of catechism we carried home in school uniforms?
We wore our house keys under crisp white Oxfords.
We let ourselves inside, but still looked both ways
before slipping a self-conscious hand into the cookie jar.

Why did they say God was keeping score?
Is that why Dad said he could never catch a break, like Job,
or why Mom said lying would turn my tongue black?
I would check in the mirror each morning
that it was still pink like I pictured the rest of my insides.

Why did we build ladders to the sky those Catholic years
or squeeze our eyes closed praying for water
when we held ten thousand years of rain?
Enough to sprout oceans,
enough to contain leviathans.