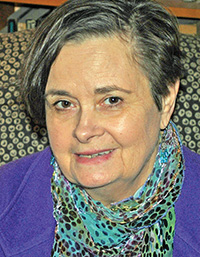 Sherry Chandler grew up in the hills near the confluence of the Kentucky and Ohio Rivers, where her family farmed burley tobacco for generations. Talking Burley is her third full-length book of poems. Her work has received several awards, including the Betty Gabehart, the Kudzu magazine prize, the Joy Bale Boone Prize, and the Editor’s Choice Award from Waypoints. Twice nominated for Best of the Net, three times for a Pushcart Prize, she has received financial support from the Kentucky Arts Council and the Kentucky Foundation for Women. She lives on a small Kentucky farm.

In Talking Burley Sherry Chandler does a difficult, deep-hearted archaeology on the “shadow obscured by deeper shadows” of lives shaped by the business and groundwork of tobacco. In unsparing, revelatory language as close to the ground as the horse-drawn setter, these poems tell of both the injuries endemic in a world where tobacco is the measure of a man, and–“for all that dark heritage”–the moments of grace to be found haloed within. ~Diane Gilliam

The ironies observed in this richly-tuned book are not ironic. They cut sharply into the real irony of Kentucky history, our national history, and the stark divides of our human condition. And yet this book remains bound to the local—a hard, tobacco-farming life, for which not everyone was hardened, least of all the poet who was witness to the beauty of this now gone world. Here is the breath of real poetry. ~Maurice Manning

In poems whose topics range from personal memory to cultural and social history, Sherry Chandler’s Talking Burley recounts the layered and lingering effects of raising and consuming tobacco in America. An accomplished poet of many voices and modes, Chandler succeeds in this ambitious collection. A big heart, cool eye, and laser wit inform the poems. Timeless and eerily timely, Talking Burley illuminates a nation and the human soul with equal and startling immediacy. ~Leatha Kendrick

The capitals of the Capitol columns
festooned with tobacco leaves

We are a city on a hill
We are a thousand points of light
We are burning crosses.

gonna beat those carpet
baggers at their own game
with their own money.

Lose a war, win a peace.

No peckerwood farmers, no pool’s
gonna stop me and my machines.
Think a man’s fast to roll
4 cigarettes a minute?

They call me Buck.
I strike my own luck.

I got the supply but I need the demand.
Gotta make them want what
they didn’t know I had.

Gonna support the troops in the trenches.
Smoke em if ya got em. Gonna
make sure they got em.

I’m gonna write Duke all over
the map of these U-Ni-Ted states.
Did I say I aimed to beat the carpet baggers?
Hell, I aim to swallow em.

The way we spoke, our broad a’s and flat i’s
made a job of a jab, turned a harrow to a hire,
ware to wire, and wire itself to wahr. So every year,
late fall, early winter, we hauled our crops to auction
on the floor of a tobacco wirehouse: a frigid place
for men to stand around and pass around brown
paper bags, where they laughed a certain way,
and tobacco could go to the pool in the dead
of winter, but where did they keep the wire?

And while I speak of books, there were the days —
most often Sunday or Thanksgiving Day —
when November’s rains softened burley in the barn
and farmers began to talk of case: low case,
cured tobacco crumbled, high case, it might get hot
and slimy. When it was just right, like Baby
Bear’s bed, the crop drew men away from giblet
gravy and jam cake toward the barn to throw
its contents out of bents and into ordered piles

we called books. For covers these books had a dull
green tarp, for spine the ranks of stalks. Their leaves
a farmer read for grades, not the teacher’s A or B
but flines, lugs, leaf, and tips, a tobacco man’s lexicon.